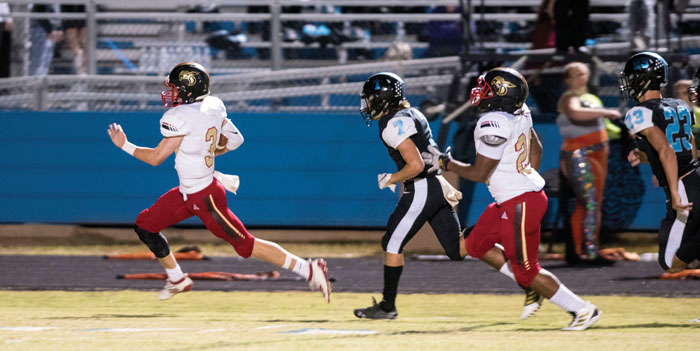 JON C. LAKEY/SALISBURY POST ... Salisbury's Vance Honeycutt (3), left, shown during a game earlier this season, had a long TD run on Friday night, in a 24-21 loss at North Davidson.

For the Lexington Dispatch

North’s defense shut out Salisbury in the second half, helping the Black Knights to a 24-21 come-from-behind win. With the victory, North improves to 6-4 overall and 6-2 in the  Central Carolina Conference. One of the best teams in the conference, Salisbury is also 6-2 in the CCC and falls to 8-2 overall.

“Just proud of those guys,” North head coach Brian Flynn said of his team. “We believe in them 100 percent. Half the battle is them believing in themselves. We are talking about a bunch of kids who haven’t played in big games, with so many graduating last year. The first half wasn’t very good … wasn’t Black Knight football.”

Salisbury was quick to get on the scoreboard. On their first offensive play, the Hornets scored on a 52-yard pass with Salisbury quarterback Vance Honeycutt hooking up with Marcus Cook. Salisbury led, 7-0, less than three minutes into the contest.

North made a great defensive stop with 5:36 left in the first quarter to force the Hornets to punt from their 1-yard line. A 24-yard punt gave North excellent field position. The Knights ensuing drive resulted in a 26-yard field goal from Jake Marion, cutting the deficit to 7-3.

But Salisbury was quick to strike back. Honeycutt, on the second play of the second drive, got into the end zone on a 68-yard run, increasing his team’s advantage to 14-3, with 53.8 seconds remaining in the first quarter.

North quarterback Tedric Jenkins connected with Jamarien Dalton on a 16-yard pass for a touchdown, with 2:33 left in the first half. Marion’s extra point cut Salisbury’s lead to 14-10.

Salisbury scored again with 36.8 seconds remaining before halftimer. This time, Honeycutt hooked up with receiver Jalon Walker on an 11-yard pass for a touchdown. The TD gave Salisbury a 21-10 lead.

At the half, Jenkins was 6-of-17 passing for 62 yards and North had just 91 offensive yards. Salisbury, meanwhile, had 196 offensive yards in the first half. Honeycutt was only 2-of-5 passing in the first two quarters, for 63 yards, but he had rushed for 120 yards.

North was quick to follow the advice of Flynn. With 8:16 left in the third quarter, Jenkins connected with Dalton on a 36-yard pass for a touchdown to cut Salisbury’s lead to 21-17.

North grabbed the lead for the first time with 3:38 remaining in the game. Jenkins put North ahead, 24-21, after a 6-yard keeper for a touchdown.

North’s defense made several key plays in the second half. One of those was forcing Salisbury to turn the ball over on a fumble with about five minutes remaining. Jenkins capitalized on that play with his rushing touchdown.

Jenkins played with an ailing left leg after injuring it in the first quarter. The quarterback described his injury as a “dead leg.”

Jenkins, who took over early in the season at starting quarterback after an injury to starter Landon Moore, said his motivation was getting a win for the seniors on North’s Senior Night. He also said Flynn’s speech helped his team.

“He just got one of those bad deep bruises, dead legs,” Flynn said, of Jenkins. “… Tedric has come a long, long way. He hasn’t had much success in his past.”

Flynn said the winning touchdown was just his quarterback making a play. Flynn called a play for his offense that took them to one side of the field, but Jenkins kept the ball and went to the other side for the score.

Flynn said the win helps North with its playoffs hopes. North travels to Ledford next Friday for the final game of the regular season. Salisbury hosts South Rowan.

Salisbury coach Brian Hinson said North came from behind because his team’s failures on offense in the second half. He took the blame for the loss, citing play calling.