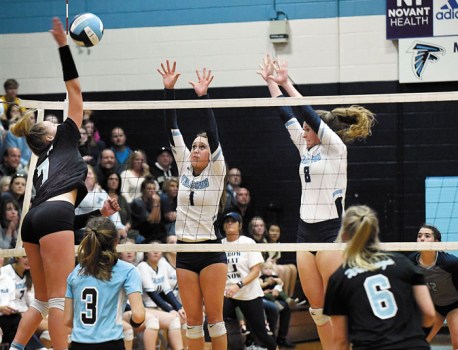 West's team. photo by Wayne Hinshaw. for the Salisbury Post 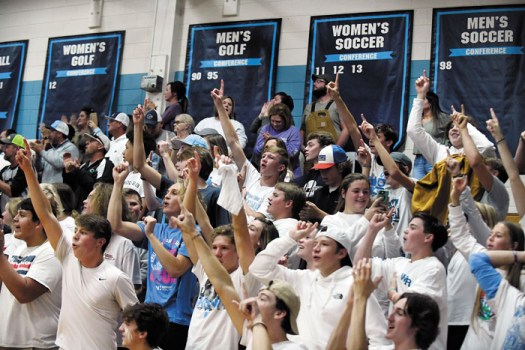 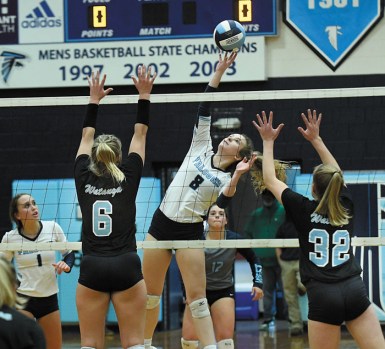 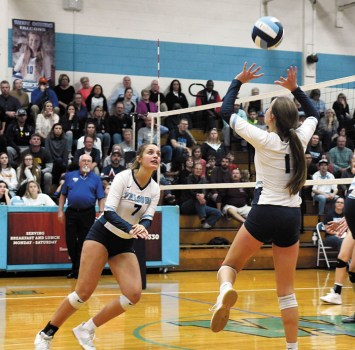 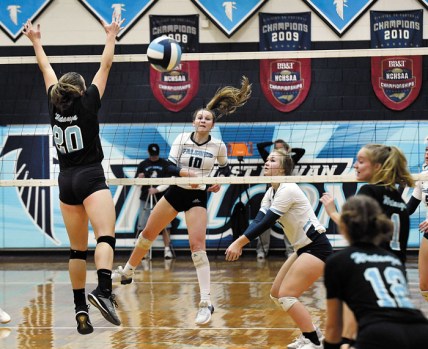 As for junior KK Dowling, who provides the floor-stomping fire that balances Hester’s ice, she did her thing also. Hester and Dowling combined for 37 kills and 37 digs, as West Rowan, making, by far, the longest playoff run in school history, beat the Pioneers 25-23, 25-17, 23-25 and 25-23 in front of a massive crowd.

Being the No. 1 seed, being able to play at home, was once again a gigantic advantage for the Falcons.

Top-seeded West (28-0) will play for the regional championship at home on Tuesday at 6 p.m. against West Henderson. Fourth-seeded Watauga (26-1), with a senior core that won 98 times, lost for the first time this year.

The biggest story for the Falcons was sophomore Noe Gaeta, who does the setting for Hester and Dowling. She was setting for the jayvees while Allison Ennis was racking up huge assist totals and propelling West to a 17-0 start. When Ennis went down with a season-ending injury, Gaeta was promoted. She had 50 assists and nine digs on Saturday.

“She’s been phenomenal stepping in for Allison,” said West coach Jan Dowling, who is also KK’s mother.  “You worry about her just getting overwhelmed by the magnitude of all this, but she stays calm. She’s a level kid, a wonderful kid.”

Gaeta said she’s always nervous before a match, but the butterflies leave as soon as the ball is in the air. Still, it was a challenge for anyone to stay level on Saturday. It was wild.

West knew it was going to be a fight.

“Watching Watauga on film, it was like looking in a mirror,” KK Dowling said. “It was like we were going to be playing us. My mom told us they were really dangerous, that we couldn’t let them get any momentum going. She wanted us to go out there and take care of them in three.”

The similarities between the two teams were striking, and not just because their primary color is blue. Both teams are middle-sized, but they have people with startling vertical jumps.

“They’re the same size as us, and they’ve got outside hitters that get up like KK and Tori get up,” Coach Dowling said. “They’ve even got two sets of sisters just like we do. That’s pretty crazy. We knew they were really, really good. We knew this was a team we couldn’t fool around with. They can serve. They can hit, They can dig.”

Neither team could get any separation in the first set until the Falcons forged ahead 23-19 on a Dowling kill. Watauga promptly fought back to 23-all. Another Dowling kill put West up, 24-23. West middle Carly Stiller’s defense in the middle against Watauga’s Georgia Southern-bound smasher Rebekah Farthing gave the Falcons match point.

West jumped out 5-0 in the second set and went up by as many as eight points. West won the set with relative ease, but by the end of it, the Pioneers were starting to settle in after their long trip down from Boon .

“We were playing as a team, talking a lot, communicating with each other really well,” said freshman defensive specialist Ashlee Ennis, Allison’s younger sister.

In the third set, however, communication faltered and momentum swung.

Brooke Byrd, Farthing and Tegan Allen hammered kills for the Pioneers that the Falcons couldn’t do much about. West lost a three-point lead and sank behind by four. Watauga wrapped up the set when Dowling smacked a serve into the net.

The fourth set would obviously be critical.

“We needed to get the energy back up,” Gaeta said. “Energy is the key for us.”

The Falcons had another of their senior-led chats in the hallway. They still fell behind 8-6, and the tension in the crowd was tangible.

Spurred by a Kelcie Love block, West pushed ahead 14-10, but then it was 16-all. Then West was suddenly down 20-18, and it appeared the set — and maybe the match — might be slipping away.

That’s when Hester took over.

“I know we played hesitant for a while there,” Hester said. “But we still believed in each other. When we trust each other and just put it all out there, we’re a really good team.”

There were some incredibly long points in that critical stretch, with Ennis, libero Brooke Kennerly and Dowling keeping balls alive. Noe Gaeta was looking for Hester every time, and the senior came through. She had the kill for 20-20, the kill for 21-20 and the kill for 22-20. Stiller had a sweet swipe at the net for 24-20, as the crowd went crazy.

The Pioneers clawed back to 24-23, denying Hester with terrific digs several times, but finally a Watauga blast sailed long by a few inches, and West owned the set and the match.

“I thought if we had an advantage anywhere it was going to have to be in the middle,” Coach Dowling said. “I challenged the girls to step up, and Carly (Stiller) and Kelcie (Love) had big plays in that fourth set.”