Harvick on pole at Texas while other Cup contenders in clump 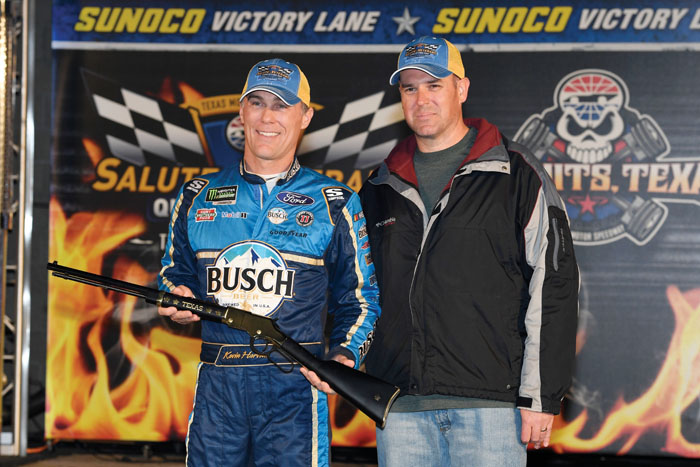 FORT WORTH, Texas (AP) — Kevin Harvick will start from the pole at Texas Motor Speedway after a qualifying lap of 189.707 mph Saturday night.

Harvick goes into Sunday’s race fifth in points with two races remaining to qualify for one of the three remaining championship-contending spots in the season finale. The driver of the No. 4 Stewart-Haas Racing Ford won at Texas last fall.

“I think the key to the lap was obviously knowing that you had to be wide open, and kind of did a halfway qualifying run (Friday) and worked most of the day on race runs and making sure we ran enough laps to know where our car was,” Harvick said. “I think the first pit stall is obviously a good stall to have here for pit road time and the things that go with that, and I think it is obviously going to be a track position game like it was last time.”

Erik Jones will start on the front row alongside Harvick.

Joe Gibbs Racing has the top three drivers in points, but Jones is the Toyota team’s only driver not in playoff contention.

“I was definitely surprised. I didn’t think that we’d be that fast. Also didn’t think we would be the best of our JGR cars,” Jones said.

Denny Hamlin, who is second in points, qualified third. Martin Truex Jr., who won last week at Martinsville and is already locked into the final four, qualified 17th.

“Yeah, a good qualifying effort for us,” Hamlin said. “Definitely is going to be better than we’ve been on the mile-and-a-halves.”

CLUMP OF CONTENDERS: Outside of Harvick and Hamlin, the other five drivers still contenting for a championship-contending spot in the Nov. 17 finale at Martinsville, all qualified in a clump together in the 11th through 15th spots.

FIVE THROUGH 10: None of the fifth through 10th qualifiers are playoff contenders.

“Just like rookie mode on a video game. You just hold it wide open and see what it will run. That is it,” Keselowski said.

WHO’S OUT: Nobody. With 40 cars entered, everybody made the field.

LOGANO IN ANOTHER RIFT AS HE EYES TITLE SHOT AT TEXAS

FORT WORTH, Texas (AP) — Joey Logano has again arrived at Texas in the middle of a rift with another playoff contender after some short-track shenanigans.

It all comes with the defending NASCAR Cup champion trying to lock in a spot for the championship finale.

A year ago, Martin Truex Jr. was upset over Logano’s bump-and-run on the final lap at the half-mile Martinsville Speedway. Truex promised that the No. 22 Team Penske driver wouldn’t win the title, although it didn’t quite work out that way.

Fast forward to last week: Truex was celebrating his first victory at the Virginia track, with the 2017 Cup champion securing a spot in the final four for the Nov. 17 championship race, when Logano went to Denny Hamlin on pit road to discuss an on-track incident.

That turned into a chaotic confrontation, with Logano smacking Hamlin on the shoulder before one of Logano’s crew members yanked the rival driver to the ground.

“Yeah, I guess that means we are running up front and racing for wins,” Logano said about all of these squabbles.

“That is what that means. You are up there and trying to win. The mini disagreements are when you are running 20th. If you are running up front and in the top-five they become escalated.”

Harvick won at Texas last fall, when he got past pole-sitter Blaney in overtime. After a good start to the playoffs this season, ranking second after the first two races, Harvick has slipped below the cutline but will start on the pole after a qualifying lap of 189.707 mph Saturday night.

“We have done nothing but shoot ourselves in the foot that last few weeks,” said Harvick, who finished seventh last week. “We started last at Kansas and crashed at Talladega and I don’t know what we did last week. I guess it was just typical Martinsville.”

Erik Jones, the Gibbs driver who is not in playoff contention, qualified second and Hamlin was third.

The other five drivers still trying to get one of the three remaining championship-chasing spots in the Nov. 17 season finale qualified in a clump together — in the 11th through 15th spots. Logano was 11th, ahead of Busch, Larson, Elliott and Blaney.

Five years removed from the only Cup title in his 19 seasons, Harvick believes the experience of the No. 4 Stewart-Haas team has helped during the tough stretch.

“It has definitely been a fight every single week in order to get the finishes that we have had and keep ourselves in contention,” he said. “I think for us the experience and the continuity of the race team and the experience of being around each other has allowed us to get the most out of everything that we’ve got.”

Hamlin and Busch are three-time winners at Texas. Hamlin, who won the spring race there seven months ago, won at Kansas two weeks ago. He was in the previous round of the playoffs, although that didn’t guarantee him a chance to run for the title at Homestead on Nov. 17.

Busch has four wins this season, but the last was five months ago at Pocono. In the seven playoff races, he finished 14th or worse for the fourth time last week.

Chase Elliott was the runner-up to Hamlin at Kansas, but finished 36th at Martinsville after a mechanical failure, and there was also his last-place finish among 38 cars at Dover when his engine gave out after only eight laps.

The Hendrick Motorsports driver’s mindset is “just trying to keep our season alive.” He needs to get to Victory Lane at Texas or Phoenix to get into the top four.

“I have confidence that we’ve put enough effort and emphasis on the failures and I think if we can get things corrected,” Elliott said. “Like I said, it is unfortunate. And I think if you’re going to fail something, now is not the time to fail it. … If it’s mechanical, it can break. That’s just part of it.”