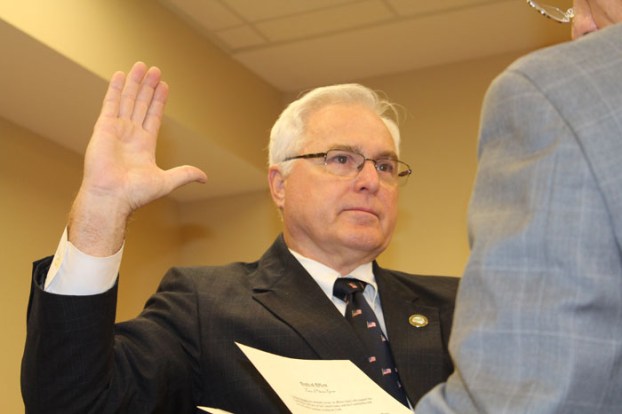 Charles Seaford was sworn into another term on Dec. 7 as a member of the China Grove Town Council. Andie Foley/Salisbury Post

CHINA GROVE — Active voters in China Grove were said to have received a one-page letter sent by Steve Stroud, unopposed in re-election bid for town council, campaigning for Charles Seaford.

With Election Day on Tuesday, the China Grove election has two candidates in running for mayor — Lee Withers, the current mayor, and his challenger, incumbent councilman Charles Seaford.

The winning candidate will serve a four-year term. Withers, Stroud, Seaford and Town Councilman Rodney Phillips, running unopposed for re-election, spoke with the Post about the letter.

Stroud wrote that he is not a big fan of “residential growth” and believes that the Town of China Grove benefits more from commercial and industrial growth.

“We can add to our tax base to support our infrastructure without becoming ‘Charlotte-like,’ ” Stroud’s letter states. “This mayor continually promotes his own agenda regardless of our wishes.”

In an interview, Stroud added, “The current mayor has always pushed combining Landis and China Grove.”

Stroud claims the board has informed Withers multiple times that they are simply “not interested in that.”

“The current mayor is going to meetings here and there and promoting his overall agenda without our knowledge or our consent,” Stroud said. “We on the council get frustrated that we have our idea as to how things are progressing and he does what he wants to. His responsibility is to promote our agenda and not his own.”

Stroud said that Seaford’s experience and goals are among the items he believes makes him fit as mayor.

Asked by the Post about the letter, Seaford kept his comments short.

“I mean, that letter was from Steve. I don’t have anything other than to say that all of the council members are supportive of me, and that is all of the comment that I want to make regarding that letter,” Seaford said.

Withers said he aims to remain positive throughout the entire campaign.

“With politics, there are always opposing sides and opinions, new ideas, new ways of thinking and new ways to open our all our eyes and minds,” Withers said. “We’re making decisions with the best interest of China Grove. I love China Grove and I’m excited for Tuesday. It’s always fun to see a lot of people that you don’t get to see. It’s just almost like a reunion sometimes.”

Withers called himself “an open book” and said that many citizens have reached out to him showing support for him to become re-elected.

“I’ve been overwhelmed. My front porch light is usually on. I’m always there and very available,” Withers said. “This really made me reaffirm what I’m doing and what we’re doing are the right things. It’s exciting.”

Withers said that “healthy discussion” and “hearing all sides” are key to the election process and that he is excited about the work the town council has accomplished so far.

“I am looking forward to where this next term takes me and takes the town,” Withers said.

The goal is to always make sure to take care of the citizens of China Grove, Withers said.

Withers also shared a letter with the Post that he recently sent out to all active voters in China Grove.

In his letter, Withers highlighted a number of his initiatives and achievements, and the letter spoke to his four major focus areas, which include improving parks and recreation, supporting downtown business, working to bring new investment downtown, bringing economic development awareness to China Grove and engaging tomorrow’s leaders.

“Working together, we have energized parks and rec committee members. This team has done amazing work — designing and implementing a plan for the Community Building Block Party, the Easter Egg Hunt, the Christmas Tree Lighting and Christmas in the Grove,” Withers said in his letter.

There are always opposite sides and opinions in politics, Withers said. That’s healthy and, Withers said, he welcomes it.

Withers’ letter also spoke about wanting to keep China Grove’s “small-town feel,” “for everyone to feel like a neighbor and friend,” and “his kids to have an amazing experience.”

Asked by the Post, Phillips a said it’s unfortunate this year’s campaign has gotten to it’s current point.

“There has been a disagreement between a couple adults (on the council). There are so many good things in China Grove right now, and a lot of momentum,” Phillips said. “We don’t need any kind of negativity from anyone. There’s six of us on the town council, none us agree 100% on everything. We do a good job working on our differences and being unified.

By Liz Moomey liz.moomey@salisburypost.com SALISBURY — The Salisbury City Council gave a lobbyist a list of projects that would benefit... read more