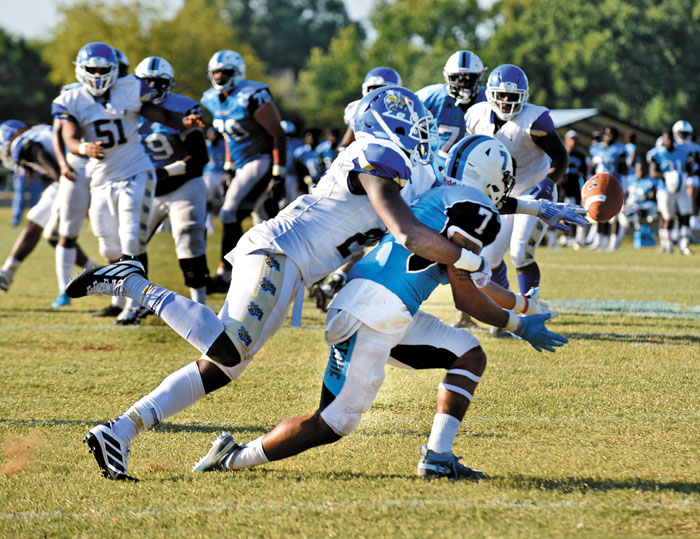 Livingstone's Anthony Faraimo (7) has a pass knocked away during an earlier game this season. On Saturday, the Blue Bears lost their fifth straight game, 32-0, to Fayetteville State. ... File photo by Wayne Hinshaw/for the Salisbury Post.

Like a hit sitcom that eventually falters, the spark has gone out of the Blue Bears’ season. A 32-0 Homecoming game loss to Fayetteville State was their fifth straight, dulling much of the shine from their 4-0 start.

“We can’t withstand all of the drops and all of the mistakes,” sixth-year coach Daryl Williams said after Livingstone (4-5, 1-5 CIAA) was blanked for the second straight week and third time this season. “I have never seen receivers drop so many passes in my life. They weren’t hearing footsteps. It was just lack of concentration. We have to do better than that.”

LC effectively contained Fayetteville State running back Stevie Green, a 1,000-yard rusher who was limited to 62 on 19 carries. What the Blue Bears lost in exchange was a game-changing performance by FSU quarterback Richard Latimer, a redshirt-sophomore out of Charlotte’s West Mecklenburg High School, who passed for 241 yards and three touchdowns.

“We keyed on their running game,” said Livingstone defensive end Gibson Ziah. “Our objective was to stop Stevie Green from getting to a thousand yards. So really, they did what we wanted them to do and made No. 4 (Latimer) beat us.”

Latimer did it by completing 20-of-26 passes, connecting with 10 different receivers and throwing TDs to Tyeous Sharpe, Toshiro Spivey and James Transou. A fourth touchdown pass was thrown by Sharpe, a wide receiver who hit teammate Kerrson Aikens with a 29-yard throw on a reverse counter pass play, early in the fourth quarter. “They had something similar to that on film,” said LC defensive back Monte Seabrook. “But it still caught us by surprise.”

“Livingstone played a lot of man coverage,” winning coach Richard Hayes added, after FSU (7-2, 5-1) clinched at least a tie for the Southern Division title. “We knew we could win certain match-ups, mostly because of (Latimer). Over the past few weeks, he’s been very efficient. He’s done a yeoman’s job managing our offense.”

Latimer, on the other hand, was quick to credit FSU’s offensive line. “They work really hard in practice and bring that to the game,” he said. “They’re fast and physical and play smart every down of every game.”

Livingstone quarterbacks Miles Hayes and Xavier Longerbeam combined for dismal numbers, completing just 13 of 34 attempts for 77 yards. It wasn’t an indication of their throwing accuracy.

“You can’t drop balls like we did,” said Williams, a former Tennessee State quarterback and LC’s primary play-caller. “They were trying to do more with the ball — trying to turn and run, before they catch it — instead of just catching the ball first. At all costs, catch the ball.”

Livingstone’s only red-zone opportunity was foiled by a dropped ball in the end zone. It came late in the first half, with Fayetteville State holding a 19-0 lead and the Blue Bears threatening from the visitor’s 13-yard line. “We catch a touchdown there and it’s 19-7 right before halftime,” Williams said. “The ball hits the receiver right in his hands, but that’s been the story here the last three or four weeks.”

The Broncos extended their lead to 26-0 in the third period on a spectacular, juggling TD catch by Transou on a 17-yard slant pass. Livingstone tried to mount a comeback, but only possessed the ball for 12 minutes in the second half and finished the game with eight three-and-outs. Camouflaged in the setback was an improved running game — the Blue Bears collected 109 yards on the ground a week after being held to minus-26 in an uninspired loss to Winston-Salem State.

“Going in, I figured we’d be able to run the ball,” said senior back Andrew Faraimo, a Fayetteville native. “I like our OL against anybody. But you can’t let something beat you twice. We’ve got to take this loss and keep moving.”

A season of broken promise has a week to live for LC, which closes up shop next Saturday when Johnson C. Smith visits for the annual Commemorative Classic. “That spark we had the first few weeks?” Seabrook offered. “We’ve got to bring some of that Saturday and give the fans a real show.”

“If that happens, it would be like Christmas coming early,” he said. “We’re gonna figure this thing out in seven days and put it together by Saturday.”

NOTES: Livingstone linebacker Malcolm Mayes had a game-high nine tackles and Seabrook — a transfer from Division I Utah — was in on eight. Teammate Walter Watkins grabbed his third interception to douse an FSU rally in the third quarter. … Former North Rowan High School kicker Jacob Young booted two extra points for FSU and had another try blocked. … Livingstone Hall-of-Famer Wilson Cherry handled public address duties for the first time since 2017.