Panthers’ Cam Newton to get another opinion on injured foot 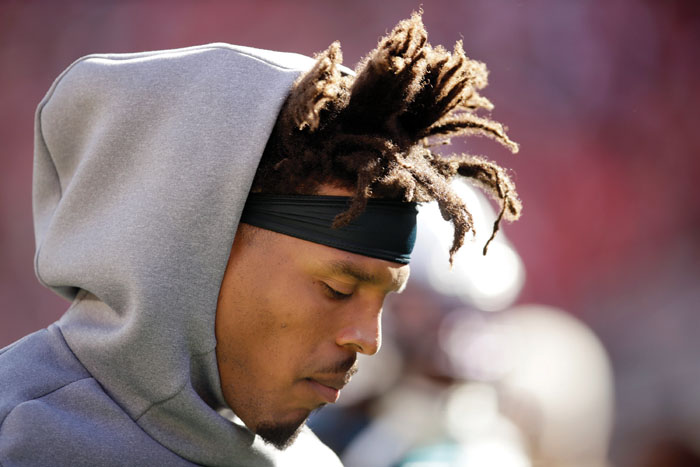 Carolina Panthers quarterback Cam Newton stands on the sidelines during the first half of an NFL football game against the San Francisco 49ers in Santa Clara, Calif., Sunday, Oct. 27, 2019. (AP Photo/Ben Margot)

By STEVE REED AP Sports Writer
CHARLOTTE (AP) — Panthers quarterback Cam Newton is seeking another opinion on his injured left foot.
The team announced Newton is traveled Friday to Green Bay, Wisconsin to visit with Dr. Robert Anderson, a renowned foot specialist who previously served as an assistant team physician with the Panthers.
Newton has missed Carolina’s last five games and has been ruled out for Sunday’s game against the Tennessee Titans, as expected. He has not practiced since Week 2 and Kyle Allen was named the starter earlier in the week.
Panthers general manager Marty Hurney said in a statement that Newton has “done everything he possibly can in his rehab process to get his foot to 100%. Unfortunately, we haven’t reached that point. The next step is for him to go see Dr. Anderson and gather more information.”
There were reports that Newton might return to the starting lineup this week after the Panthers lost 51-13 last Sunday to the San Francisco 49ers. But coach Ron Rivera quickly named Allen the starter on Monday.
Rivera said Friday that the hope is Newton can avoid surgery. However, the team won’t know what the plan is moving forward until after the quarterback meets with Anderson.
Rivera added there is still no timetable for Newton’s potential return.
“The biggest thing is we want to support him and be there for him and hopefully when he is 100% we can move forward,” Rivera said.
When asked if the team has discussed putting Newton on injured reserve, Rivera said: “I don’t want to get into that. We are listening to the information we are getting.”
Rivera said Newton is frustrated with the situation because he wants to compete, but added “he’s been up front and honest with us and he’s working hard.”
Newton injured suffered a midfoot sprain in the third preseason game, but wound up starting the first two games for the Panthers — both of which were losses.
Rivera said he doesn’t believe the Panthers rushed Newton back too soon.
“Based on what we knew at the time, no,” Rivera said. “I thought we did what we were supposed to do. Obviously it didn’t work out that way and hindsight would be great to have.”
NOTES: Rivera said he’s unsure if defensive end Mario Addison will play Sunday following the death of his brother earlier in the week. Addison has not practiced this week and was attending the funeral on Friday. He is listed as questionable on the injury report. … Wide receiver Curtis Samuel (shoulder) is also listed as questionable, but Rivera is optimistic he will play.
___
More AP NFL: https://apnews.com/NFL and https://twitter.com/AP_NFL