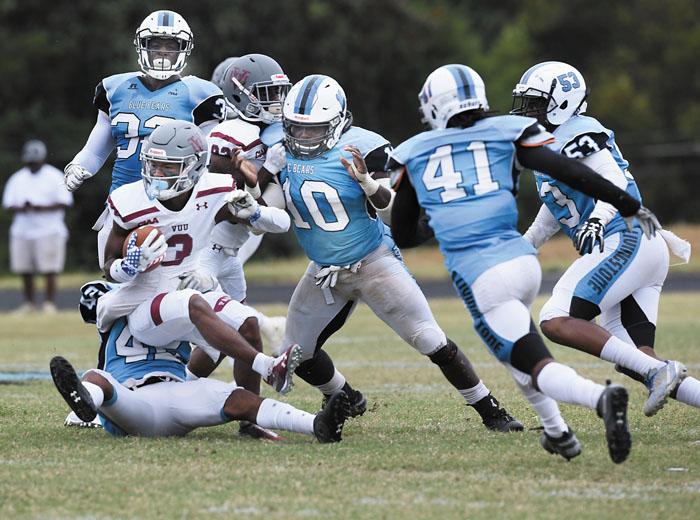 The Blue Bears started the season with four straight wins, including a CIAA victory over Lincoln.

However, Livingstone has lost four conference games in a row since, including three to Southern Division foes — St. Augustine’s, Shaw and Winston-Salem State. The other defeat came at home to Virginia Union, 44-0.

But against the Rams, LC managed just 148 yards, including a dreadful minus 26 on the ground.

“Obviously, we’ve got to do a better job on offense,” said Williams, at his Tuesday radio show. “We didn’t score any points. We’ve got to have more fight and more leadership from our offensive unit. The defense and special teams are the only two units that showed up against Winston-Salem State.

“Offensively, we haven’t passed the test at home this season,” continued Williams. “We’ve been shut out twice. We need to take a little more pride in our performance and score some points.”

The offense has been the issue for most of the season. With just two games left, Livingstone’s leading rusher, Darrell Bethune, has gained just 261 yards.

Quarterback Miles Hayes, who has played in all eight games but, recently, has not been starting, has passed for 1,275 yards. The sophomore has thrown the same amount of touchdowns as interceptions — 8.

On defense, senior linebacker Raheem Coxfield leads LC with 49 tackles. Rush end Gibson Ziah has 38 tackles and 8.5 sacks, by far the team leader in getting to the opposing QB.

Now Fayetteville State comes to town, leading the Southern Division. The Broncos are 6-2 overall and 4-1 in the CIAA.

A positive could be that St. Augustine’s cooled off the Broncos last week, winning in Fayetteville, 23-21.

Livingstone will try to defeat FSU on Saturday for the first time since 2015, which was also a Homecoming game. That day, star quarterback Drew Powell completed 28-of-35 passes for 364 yards and two TDs, as the Blue Bears won, 42-35, in dramatic fashion.

Both teams scored 14 points in the fourth quarter and running back Latrell Flowers put the Blue Bears up with a two-yard scoring run with 7:58 left in the contest.

The Broncos then marched down the field and appeared poised to score and force overtime. However, Livingstone linebacker Billy Moore intercepted a potential scoring pass at his team’s 3-yard line — as the clock expired.

Since then, the Broncos have won the last three games, including a 45-7 decision last year in Fayetteville. Two years ago in Salisbury, FSU won a nail-biter, 28-26.

“We want to get this thing turned around,” said Williams. “We’re 4-4 and if you would have told me at the beginning of the season that we’d be 4-4, I would have disagreed. I would have thought we’d have one or two more wins.  But a lot of teams in the country would love to be 4-4, I will say that.

“We’ll be ready to play on Saturday and are expecting a hard-fought game,” continued Williams. “It’s always exciting to play on Homecoming, because it’s a bigger crowd and an exciting time on campus. But each and every player, and coach, just needs to do his job with a level of efficiency and execution. You expect to do well, especially at home, but we’re just not executing.”

NOTES: Fayetteville State and Livingstone are very old rivals, having played each other 71 times. … The Broncos lead the series, 43-25-3. … Livingstone won the first game, 37-0, in 1929 … the Blue Bears closed the last century with a seven-game winning streak (1993-99) in the series. However, beginning in 2000, FSU has won 17 of 19 games. … next Saturday, in the regular season finale, Livingstone hosts Johnson C. Smith in the annual Commemorative Classic — celebrating the oldest rivalry in historically black college football. Livingstone and Biddle (later became JCSU) played first in 1892. Kickoff is scheduled for 1:30 p.m.

Panthers’ Cam Newton to get another opinion on injured…