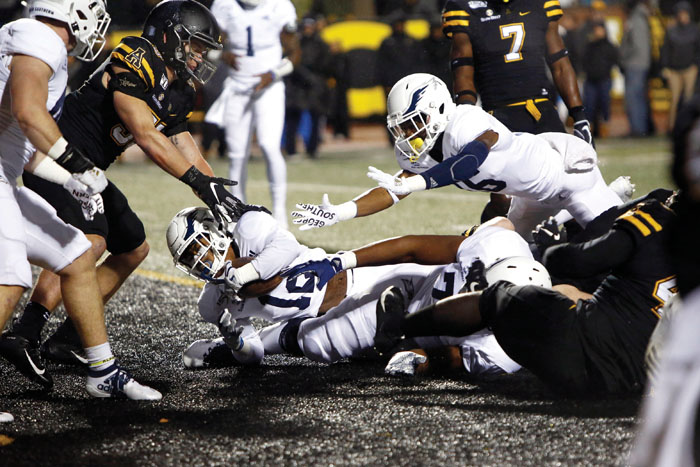 Georgia Southern running back Wesley Kennedy III (12) falls into the end zone for a touchdown during the first half of the team's NCAA college football game against Appalachian State on Thursday, Oct. 31, 2019, in Boone, NC. (AP Photo/Brian Blanco)

By STEVE REED AP Sports Writer
BOONE (AP) — When Georgia Southern quarterback Shai Werts kept the ball on an option play instead of pitching out, he looked up to see one thing.
“Field, just field,” Werts said of his 55-yard touchdown run.
There was plenty of open field for Eagles ball carriers Thursday night at Kidd Brewer Stadium.
Wesley Kennedy ran for 145 yards and two touchdowns, Werts ran for 87 yards and Georgia Southern racked up 335 yards on the ground behind their triple-option offense to upset No. 20 Appalachian State for the second straight season, 24-21.
The Eagles defense held the country’s ninth-highest scoring offense in check most of the night on a rainy, windy Halloween night where temperatures dipped into the 20s.
Georgia Southern (5-3, 3-1 Sun Belt) ended Appalachian State’s 13-game winning streak, handing the Mountaineers their first loss since knocking them out of the Top 25 more than a year ago with a 34-14 victory.
Appalachian State again struggled defending Georgia Southern’s triple-option offense.
Kennedy struck the biggest blow when he took an option pitch from Werts and raced 68 yards for a touchdown on the first possession of the second half. Werts blew through a huge hole in the line and raced 55 yards for a score on the ensuing possession to give the Eagles a 24-7 lead, sending the vast majority of the crowd heading to the exits.
“This is a good milestone for us beating a Top 25 team, but we have to keep going,” Werts said. “But we are going to enjoy this one for the next few days.”
Kennedy, who didn’t play in Georgia’s Southern’s losses to No. 1 LSU and No. 13 Minnesota, averaged 11.2 yards per carry. He did most of his damage getting around the corner behind solid blocking.
“The O-line just opened up the holes and I was just hitting them,” Kennedy said.
Appalachian State (7-1, 4-1) came in averaging 41 points, but struggled to get any momentum going for the first three quarters other than a 92-yard touchdown drive in the final 2 minutes of the first half.
Zac Thomas tried to rally App State with two fourth-quarter TD passes to Corey Sutton, but the Mountaineers’ final two drives ended without any points. Thomas finished with 272 yards passing and three touchdowns.
“It hurts,” said Thomas, who fell to 17-3 as the Mountaineers starting QB. “But I don’t think a ranking defines a team. I mean I wish we went higher (in the polls), but obviously we will fall. But it doesn’t matter at this point. We just have to keep fighting. We still have a lot of ballgames to play.”
POLL IMPLICATIONS
The loss will almost certainly knock the Mountaineers out of the Top 25. Appalachian State came into the game as the highest ranked Sun Belt team ever, but now they will need outside help just to reach the conference championship game. “We’ll put this behind us and keep moving forward,” Mountaineers coach Eli Drinkwitz said. “There’s a lot of season left. There are a lot of things still to play for. Obviously, we don’t control our own fate. They have the tiebreaker over us, but there’s a lot of conference games left to be played.”
THE TAKEAWAY
Georgia Southern: The Eagles played like a team on a mission, controlling both sides of the ball from the onset. The offensive line fired off the ball, creating big holes on the edge for Kennedy. When the Mountaineers began over-pursuing to the outside, Werts burned them between the tackles.
Appalachian State: The defense that had been so good over the past three games — allowing just 17 combined points — couldn’t figure out the triple option offense until the fourth quarter. But the Mountaineers got beat in the trenches on both sides of the ball.
CONFERENCE OUTLOOK
The win is a big one for Georgia Southern because it gives its the tiebreaker advantage over Appalachian State when it comes to determining who goes to the Sun Belt Conference championship. Both teams, along with Georgia State, have one loss in the Eastern Division.
Georgia Southern didn’t make it to the title game last season despite beating the Mountaineers.
“That’s our goal — to get to the championship game this season,” Werts said.
WINDY NIGHT
It was a such a windy night that one of the Appalachian State cheerleaders got the flag she was running with after a touchdown caught up in the crossbar on the goal post. She needed help from an official to get it untangled.
UP NEXT
Georgia Southern: The Eagles visit conference foe Troy on Nov. 9.
Appalachian State: The Mountaineers travel to Columbia to face South Carolina on Nov. 9 in their final non-conference game of the season.
___
More AP college football: https://apnews.com/tag/Collegefootball and https://twitter.com/AP_Top25