College football: Catawba on the road for SAC game at Tusculum 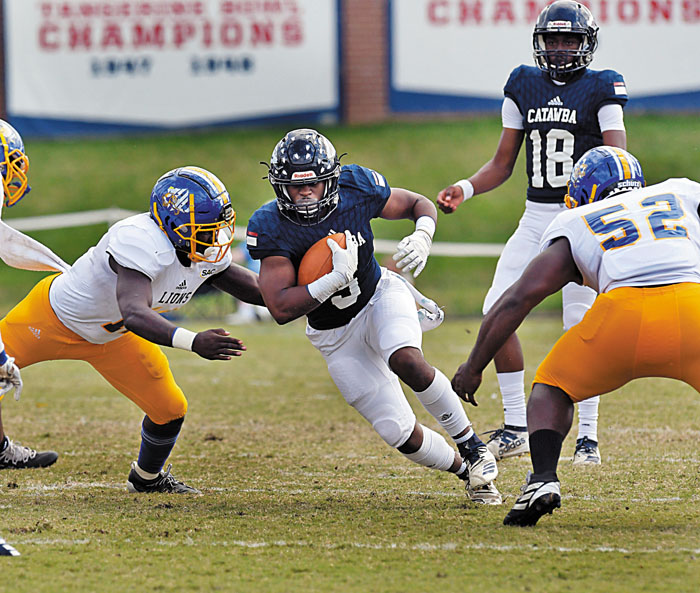 Catawba's Demonte Good (5), during last week's game against Mars Hill. The Indians play at Tusculum on Saturday. ... File photo by Wayne Hinshaw, for the Salisbury Post

That’s the harshest skid in 25 years for the proud South Atlantic Conference program, the longest slide since the Indians allowed a scary 44 points per game and stumbled to a 2-9 record in 1994.

A lot of fans already have turned their attention to Goodman Gym, where Catawba’s men’s basketball squad is busily preparing to pound opponents this winter, but football head coach Curtis Walker, his staff and his players are still putting in the hours. They’re trying to find enough healthy skill people to compete. They’re trying to put together a game plan that can disguise the weaknesses of the battered Indians enough to win a football game.

Kaylon Wade, a true freshman who was enjoying a peaceful redshirt season a couple of weeks ago, memorizing the playbook and eating eggs and waffles to add pounds to his youthful frame, is now the quarterback. In his first start against Mars Hill, Wade threw four touchdown passes. That was the good news. The bad news was that Catawba (1-7, 0-5) allowed four touchdowns in four minutes  … yes, four minutes … and lost by 27.

Andrew Bynum, projected to get occasional carries as the No. 3 back when the season began, is now the running game. No. 2 man Nasjae Bryant went down early. Workhorse starter Demonte Good joined Bryant on the sidelines last week.

Will Sweeper, Lovelle Williams and Kolby Easley would be a pretty solid receiving corps, but they weren’t available last week. The pass-catching load is in the hands now of Gavin Rose, a senior who has a lot of heart and lot of speed, but is 5-foot-10, 145 pounds. Rose careered against Mars Hill with 10 catches for 194 yards and two TDs.

“Everyone is staying positive,” Rose said. “We’re working and progressing. We’re still committed. Our quarterback (Wade) is getting more comfortable every day, and we expect to win this Saturday.”

Rose means it. He’ll do everything he can.

True freshman guard Cameron Ivy-Young (6-2, 295) will start again Saturday. He’s strong and tough and his future is bright, but the Indians didn’t want to have to throw him in the fire yet.

“He played at a high level of high school football in Georgia,” Walker said. “He reminds some people of (former All-SAC Indian) Quinzavious Sands. He’s got a big ol’ body and he can move people around. We didn’t know he’d have to help us so soon, but he’s more prepared than most true freshman.”

Catawba’s ferocious 13-10 loss to ranked Wingate, the Indians’ best effort so far, was on Sept. 28. The Indians really haven’t come close since the Wingate heartbreak.

Catawba’s latest opponent is Tusculum. The Indians will journey to the Tennessee mountains on Friday and will play at Pioneer Field on Saturday at 1:30 p.m.

Tusculum (3-5, 2-3) hasn’t scared anybody, but the Pioneers do own victories against two teams (Limestone and UNC Pembroke) that contributed to Catawba’s losing streak. UNC Pembroke had the honor of starting Catawba’s downward spiral on Sept. 21.

Walker is 4-2 against Tusculum. Tusculum coach Jerry Odom, a good friend of Walker’s, is 1-2 against Catawba.

Catawba leads the series 16-7, although that fact isn’t going to help the Indians much when the teams line up on Saturday.

Walker says it every week, the Indians just have to make more plays — offensively, defensively and on special teams. They frequently get slaughtered in the return game. That was certainly the case against Mars Hill.

Where Tusculum has a major edge is defensively in stopping the run.  Catawba ranks 159th in D-II nationally (out of 166) and has surrendered twice as many ground yards as the Pioneers.

The sack numbers are encouraging. Tusculum is yielding four sacks per game, so the Indians may have chances to knock around Tusculum’s QBs.

Tusculum has an effective back in Jordan Shippy, who has rushed for 617 yards.

Catawba has won the last two meetings with Tusculum, including a 55-37 victory on homecoming at Shuford Stadium last season. Catawba scored 34 points in the fourth quarter of that one, basically doing to Tusculum what Mars Hill did to the Indians last week.

Catawba needs a win in the worst way, but it may take some breaks and bounces. The Indians are 14-point underdogs.