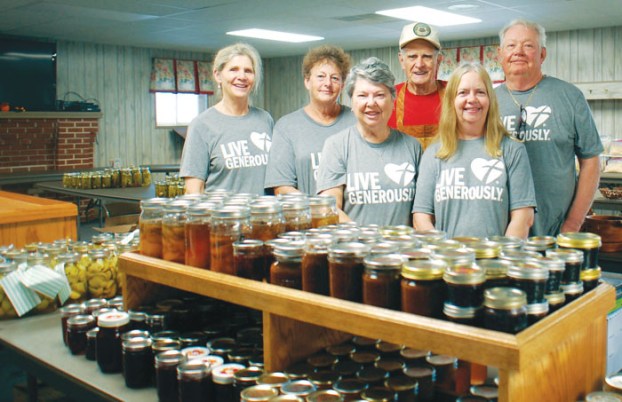 Some 1,200 canned vegetables, salsas, chowchow and jellies will be for sale Saturday at Organ Lutheran Church’s fall bazaar. Those who worked on goods to be sold include, from left, Janice Murray, Kathi Lingle, Kaye Davis, Andrew Brown, Le-nea Goble and Raymond Davis. Mark Wineka/Salisbury Post

ROCKWELL — Last year, the congregation of Organ Lutheran Church had its own vegetable garden. A trio of women — Le-Nea Goble, Kathi Lingle and Janice Murray — spent many of their summer mornings canning the produce from that three-fourths of an acre.

In the end, the women, sometimes with help from other members of O-WINGS (Organ Women in God’s Service), canned roughly 500 jars of beans, beets, cucumbers and chowchow and sold them at the fall bazaar, always held the first Saturday in November.

Well, the women canners are back with a vengeance this year.

For Saturday’s fall bazaar, which will be held in the fellowship hall from 8 a.m. to 2 p.m., they canned 1,173 8-ounce cups, pints, quarts and short half-gallons jars.

Not only were they reaping the produce rewards from the church garden, which had been tilled, planted, tended and harvested by Andrew Brown, Kaye Davis and Raymond Davis, other folks in the congregation and community at large supplied them with fruits and vegetables from their homes.

“The community and the church have really come together,” Goble said.

Folks such as Tom Sifford and 90-year-old Delmar Gorman kept giving them vegetables.

So there was a lot of canning to do, and the women worked in the fellowship hall kitchen about every other morning for much of the summer.

As they were setting up tables and shelves Thursday for the bazaar, Goble pointed out the jars of salsa verde made from green tomatoes, not to mention the three different kinds of green tomatoes in other jars — curried spice, dill garlic and spice mix varieties, all with the recipes attached.

The canned pickles come in dill, sour and salt options. The pickled okra? You can get it mild, hot and “flaring hot,” Goble said, depending on how many jalapeños are in the jar.

There are big jars of the late Rutch Sifford’s soup starters, along with other popular standbys, too, such as green beans, red beets, red tomatoes and chowchow.

Goble said the women aren’t really worried about having jars left over Saturday. Many times, after people get home and taste what they’ve bought, they say, “I wish I had bought more,” according to Goble.

“Then our phones start ringing,” she added.

The O-WINGS members bake cakes for the bazaar, too, and homemade noodles to take home also will be for sale.

The bazaar ranks as a good place to have breakfast or lunch. The O-WINGS will be serving up ham and sausage biscuits in the morning and Brunswick stew, chicken-and-dumplings, potato soup and hot dogs other times.

This year’s bazaar will be bigger and better than ever, Goble promised, with all the prizes to be raffled off, the availability of fresh produce in a corner farmers market, handcrafted items, potted plants, Christmas yard sale items and homemade pet treats fashioned by Kaye Davis.

The farmers market will offer things such as turnips, sweet potatoes, radishes, pumpkins and eggs.

Kaye Davis will have for sale fragile bowls and Christmas ornaments she made from black walnut shells. Her husband, Raymond, will offer turned bowls he made from cedar, black walnut and oak.

All the proceeds from the bazaar go to the church’s outreach ministries, which include the clothes closet and food pantry open from 9 to 10 every Thursday morning, and organizations such as Rowan Vocational Opportunities and the battered women’s shelter.

Everyone was having fun Thursday getting ready for the bazaar, especially when Brown put on his seed-planting apron with its deep pockets for holding seeds.

He bought it in Pennsylvania’s Amish country. “I saw this, and I said, ‘That’s it.’ I’ve really enjoyed it. It’s a good piece of material.”

“You need some high heels to go with that, Andy,” he said.

Now that would be bizarre, at the bazaar.