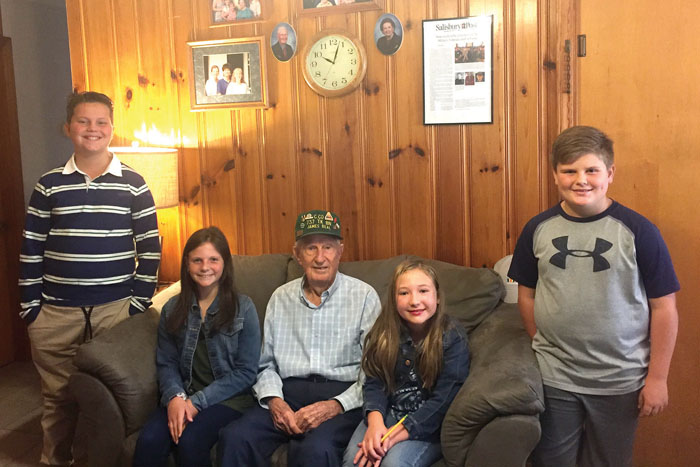 World War II veteran Jim Deal described his military service to Faith Elementary School fifth-graders. The group got a first-hand account from the 96-year-old to lead up to the Veterans Day breakfast the school will sponsor at 9 a.m. Monday.

Surrounded by awards and plaques in his living room, Deal remembered his time as a tank gunner working under Gen. George Patton. His team waited across the English Channel for D-Day.

“We were standing outside watching our B-17 bombers come across us. There was so many of them it almost blackened the sky,” he recalled.

Drafted at 18, Deal trained at Fort Lewis, Washington, for a year. He quit school in ninth grade to help on his family’s Rowan County farm, but the war took him to a foreign world and danger.

“We was living hour to hour. We had to be on guard all the time. It was rough.”

At times, bombs and shells would explode right outside the five-man tank. Deal says he was in several battles in France he did not want to be in, but he relied on his faith.

“I had hope that I could go through it and not be hurt or killed and come back home. So that was with me all the time. I felt like it, you know, I prayed that the Lord would take care of me. And he did.”

While trying to find a place to sleep one night, Deal stepped on a trip wire. His wounds earned him a Purple Heart and a trip away from the battlefield.

“When I got back over there in England in the hospital, gosh, I almost felt like I was back home.”

Deal believes students should know about World War II so history doesn’t repeat itself. He says the Army educated him and gave him discipline.

Deal believes his service made him the man he is today.

The Faith Elementary School Veterans Day breakfast is at 9 a.m. Monday. Veterans from the community are welcome.