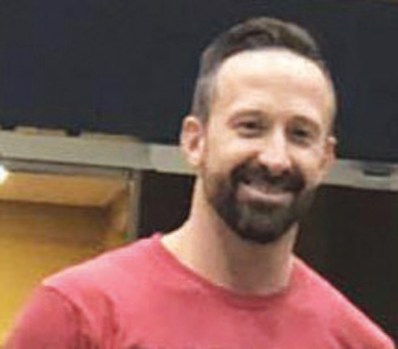 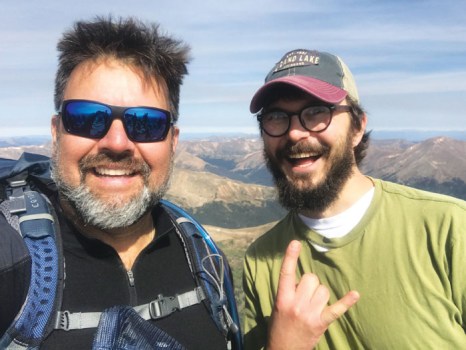 Submitted photo On Sept. 15, at the summit of Torrey's Peak in Colorado, in a complete coincidence, two men from Rowan County met for the first time — Mike Wright, left, of Rockwell and Michael Paolino, of Salisbury. Sept. 15, 2019. 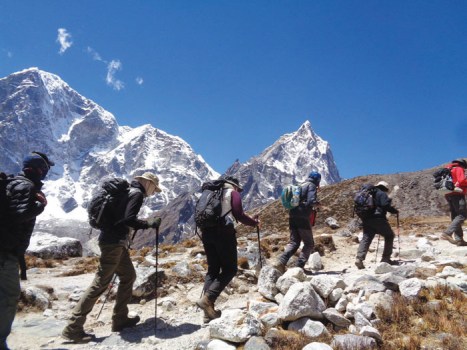 Twitter photo Hikers on the way to Everest Base Camp 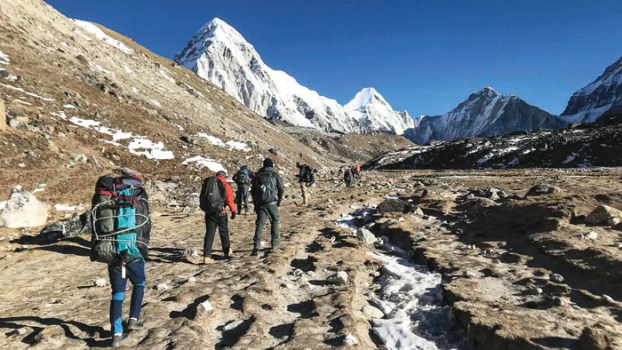 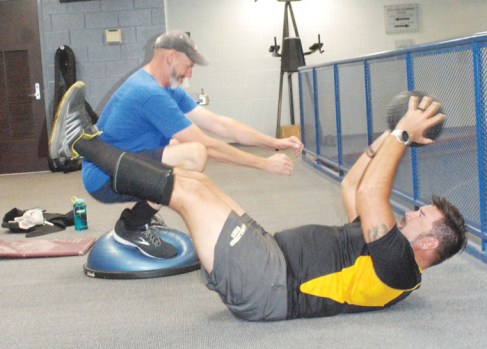 Dennis Davidson/Salisbury Post ...John Pendzinski, left and behind, and Mike Wright, work out at the East Rowan YMCA on Oct. 8. The two, along with Matt Staton, are preparing for a trip to Nepal, for a trek to Mount Everest base camp. 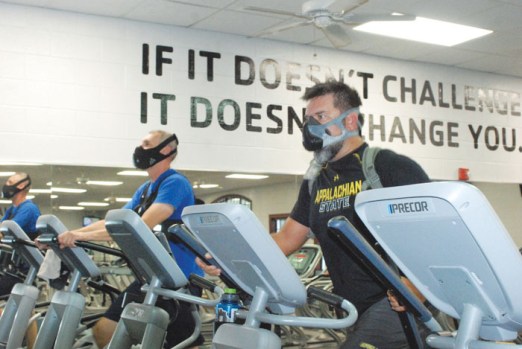 Dennis Davidson/Salisbury Post ... John Pendzinski, left, and Mike Wright, work out at the East Rowan YMCA on Oct. 8. The two, along with Matt Staton, have been working out for nearly two years, preparing for a trek to Mount Everest base camp. They leave on Tuesday for Nepal.

ROCKWELL — Three Rowan County men have had Nov. 5 circled on their calendars for two years, and it has nothing to do with election day.

Mike Wright, John Pendzinski and Matt Staton embark next Tuesday on a three-week journey to Mt. Everest base camp in Nepal, returning two days before Thanksgiving. The three adventurers decided to take on the challenge in November 2017 and booked the trip the following February. They’ve been training for it since, at the East Rowan YMCA and with hiking trips in Colorado’s Rocky Mountains.

By now, East Y members are surely used to seeing Wright and Pendzinski on elliptical machines, wearing masks toting weighted vests and backpacks. They also used the hiking trails in the woods behind the Y, going at least five miles each time. Fit guys who worked out before even booking the trip, they’ve done the specialized workouts for six days a week, for the last 21 months.

“We’ve been working out for along time, but this trip gives us a reason,” joked Wright, recently, looking down from his elliptical machine. “We have more specific training that we’re doing for this trip because we’ll get as high as 18,500 feet and it’s 72 miles round trip — 36 up and 36 back.”

Wright said that wearing the masks while working out strengthens the diaphragm and gets a person used to breathing under assertion. It also increases the lung capacity.

But to get “real world” training, many hikers go to Colorado. Pendzinski has actually been there three times this year, in May, July and September. Boone resident Chad Michael climbed Pike’s Peak with Pendzinski in May. Wright joined Pendzinski in September for the trek up Mount Elbert (second highest peak in lower 48 states), Mount Evans and Grays and Torreys peaks.

“What the Colorado climbing does, it gives us a real world assessment of our training, of how we do physically, up and down,” said Pendzinski. “And it let us test our gear … the boots, the backpack. We did well. It validated what we’ve been doing so far, because but when we’re out there, we’re in and out of elevation. We’re at 10,000 feet and then 14,000, back to 10,000 and then 14,000 again.

“In Nepal, you go up 14,000 feet and above and stay there for a while, and it can impact you differently, so we can’t test that beforehand,” continued Pendzinski. “But we’re doing everything we can to simulate it.”

According to an outdoors enthusiasts website, it takes two months to summit Mt. Everest (29,029 feet), and only about 600 people attempt it each year. Of those, only around 300 are successful.

While Everest base camp is a difference of 10,500 feet from summiting, it is still a huge undertaking. And while true adventurers have no fear, most are very respectful of the risks.

“There’s some truth to the dangers and there’s definitely some risks,” said Wright, in all seriousness. “Altitude sickness is the biggest challenge. That’s what we’re doing with this training, beating ourselves up and getting our hearts used to it. You can’t acclimatize to the elevation until you’re at the elevation. You can just condition your body to see how it’s going to react to it, from an endurance and strength standpoint.”

Others risks, according to Wright, are falling, avalanches or something else unforeseen. “Those are all risks, but not as imminent as hypoxia,” he said. “They rescue people who are in the best shape in the world and have been there before. Sometimes it affects you and sometimes, it doesn’t. But certainly, if you haven’t trained for it, it’s probably going to get you.”

Just getting to Nepal is a adventure in itself. The trip takes 37 hours and there is an 11-hour time difference.

The group flies out of Greensboro on Tuesday, connecting in Philadelphia for the long flight to Doha, Qatar. From Doha, another flight moves on to Kathmandu, Nepal. But they’re still not there. There’s a five-hour bus ride, followed by a 45-minute flight in a smaller plane to Lukla. That’s where the men will begin the climb.

“Lukla supposedly is the world’s most dangerous airport, so landing the plane there might be the biggest risk of all,” Wright said, still with a confident smile. Pendzinksi added: ” I can’t even keep up with that travel schedule. Just wake me up when we get there.”

Wright, Pendzinki, Staton and Michael will be joined by two friends from Florida, Christa Gibson and Mike Strauss, making it a five-man, one-woman group. After two days of travel, they will rest a day and then off they will go on the 10-day hike.

The trekking company they’ve contracted with has arranged all of the group’s stays along the trail. There are little villages along the way, with small cafes downstairs and sleeping arrangements upstairs. Pendzinski said that the further up they go, the more primitive it gets.

According to a travel website, the cost of an Everest base camp journey, including travel, ranges between $2,000 and $5,000 per person.

“They told us what to bring,” said Wright. “It’s up to us to bring it. It’s all inclusive as far and the food and lodging. The trekking company has been doing this for 20 plus years. He’s got a presence in the region and his Sherpas (an ethnic group of people who live in the mountains of Nepal and central Asia and who serve as guides) work only for him. John and I will share a Sherpa. We’ll carry our backpacks and he’ll carry our bigger bags or the yak (a long-haired, short-legged ox-like mammal) will. There are four people to one yak and then two people to one Sherpa.”

Wright also explained the timing of the journey. “You don’t do this in June through September, due to monsoons,” he said. “We expect it to be zero at base camp, but cold means stability in the weather and the monsoons are gone. Cold and clear is what we’re looking for. That’s when you get the beautiful scenery.”

Wright also laid out the plan for acclimatizing. “We’ll hike up 2,000 feet and then come back down, stay that night, and the next day, hike up 2,000 feet and come back down again, to get our bodies acclimatized,” he said. “It’s climb high, sleep low. Then we start climbing. We go two more days, stop at another village and do the same thing there. So, on the way to base camp, four of the 10 days we’re acclimatizing and for six days, we’re actually making progress.”

The men will spend one night at base camp, and head back down. While it takes 10 days to go up, it’ll only be three days in returning. “That’s because we’re going downhill and we’ve got a plane to catch.”

The group is scheduled to be back on Nov. 26.

“It’s three weeks, but a lot of that is travel,” added Wright. “We get back in time for Thanksgiving and hopefully, we’ll have a lot to be thankful for. We all want to get back and tell our stories. My promise to Leslie (wife), is that I’ll be back and tell my own story. Nobody else is going to tell her.”

This is hardly the first adventure for Wright, Pendzinski and Staton. All three are motorcycle enthusiasts and have seen the United States several times over.

Wright, 51, an Ameriprise Financial advisor with an office in Salisbury, will actually celebrate his 52nd birthday while in Nepal on Nov. 24. He has taken many motorcycles trips around the country and in August of 2015, rode his Harley to Alaska and back — a 28-day trip.

While in Alaska, Wright took a flight that landed on a glacier at Denali (formerly called Mount McKinley), the highest peak in North America at 20,310 feet. “That planted a seed in my mind to go see other mountains,” said Wright.

Wright was a high school athlete in Orlando, Fla., and playing baseball and football. He enrolled at the University of Florida before transferring to Appalachian State. He met Leslie while a student in Boone. Upon graduation from App State, they found their way to eastern Rowan County in 1992, due to Leslie’s roots in the town of Faith.

Pendzinski, 49, is an operations specialist at Southeast Hydroblasting in Landis. A native of Ontario, Canada, Pendzinski has self-proclaimed “OCD tendencies. I’m good with cars and engines.” Wright added: “When John gets on to something, he’s all in, in a good way. That’s beneficial for this trip.”

Pendzinski, who once rode his motorcycle to California, up the coast to British Columbia and came back across Canada, didn’t have to be talked into this latest journey, but he did sleep on it.

“The first thing I did is what everybody does. I said to Mike, ‘dude you’re crazy,'” he recalled. “‘What are you doing? You’re nuts.’ But then, I googled it that night and thought, hey, this is something we can do. So, I texted Mike and said ‘I’m in.'”

Pendzinski said his wife of 15 years, Melissa, was fine with him going. “I just had to put together an “oh crap file” before I leave,” he laughed. “You know, all the paper work of where everything is. She just said, ‘I don’t have to go do I?'”

Wright said that Leslie, too, was supportive of the trip. “She knew what knew what she was getting into 30 years ago,” he chuckled.

Staton, 37, is a Rockwell native and graduate of East Rowan High School (2000) and Appalachian State in 2004. He is vice president of Powlas Staton Funeral Home and president of Carolina Cremation. He resides in Rockwell with his wife, Adrian, and a daughter.

While in high school, Staton met Wright through his father, Steve Staton, and became bigger friends through their affiliation with App State. They frequently tailgate at the Mountaineers’ football games and Staton has gone on many motorcycles trips with Wright and Pendzinski.

“Mike’s a good friend and always wants to include everybody in things,” said Staton. “He started talking about this Everest trip on one of our motorcycle trips and I said, ‘let’s do it.’ So, we booked it and started training a year and half ago. And now, it’s here.”