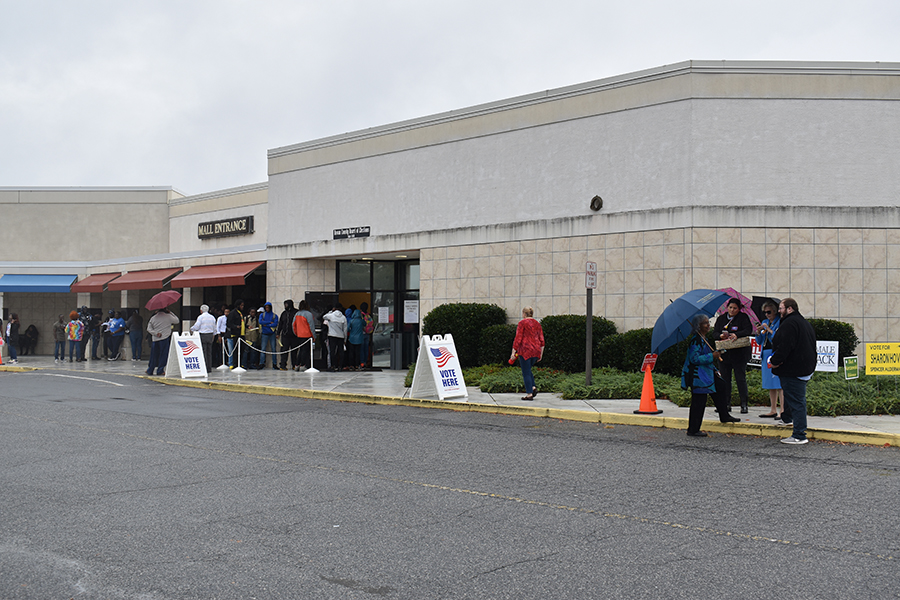 Livingstone College students line up to cast their vote on Wednesday. Candidates, right, tagged along to share their platform with the students.

SALISBURY — A week after hearing from candidates during the Livingstone College forum, students headed to the polls to vote Wednesday.

Traveling by bus, the Livingstone students made their voices heard by casting ballots for candidates to represent them and the Livingstone College community on the Salisbury City Council. Candidates for City Council greeted the busloads of students, including Karen Alexander, Patricia Jones “P.J.” Ricks, David Post, Giannina Monzon and Mayor Al Heggins.

Livingstone requires students to register to vote and the school has historically organized student voting events. Classes were canceled Wednesday to ensure they had the time.

“The bottom line is you have to demonstrate your constitutional right,” Mawolo said.

Starr Campbell, a junior, said she urged others to go vote.

“You can’t complain who is in office if you don’t vote,” Campbell said.

For senior Chris Glover, voting in Salisbury is important because it is the students’ home for four or five years.

“We live in a community, and we need to have our voices heard by City Council members,” Glover said.

Glover polled students after they cast their votes to find out if they had any problems and to ensure the process is smoother in the next election. His fraternity, Phi Beta Sigma, partnered with Common Cause in the effort.

It was helpful to hear the candidates’ ideas during last week’s forum, he said.

Miss Livingstone College Shontavia Wright said it is important to vote, especially as a young person of color, because voters have the ability to shape the future.

The forum helped students hear the candidates’ values and ideals, said Anthony Faraimo, the Student Government Association president. Faraimo said the forum allowed students who typically wouldn’t be aware of the candidates a way to get to know them. 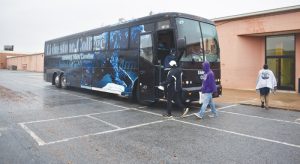 Livingstone College students head to the bus following casting their vote at one-stop voting Wednesday afternoon. The students didn’t have classes and were bused to the polls.

Some candidates’ opinions resonated with the students. Wright said she voted for Heggins because she is active in the Livingston College community and Tamara Sheffield because she is showing her face and listening to students.

Sophomore Michaela Jones said she wanted to know how candidates are going to meet the college’s transportation needs and provide students without cars a way to get around the city. She said candidate Gemale Black, the Salisbury-Rowan NAACP president, has provided a bridge for residents to call that organization, which will relay a message to the Salisbury Police Department.

Voting gives her the ability to make an impact, she said.

Campbell said she voted for candidates who seem willing to work and help the community.

Heggins was happy to see the college offer students transportation to the polls.

“Your vote is your voice. It really is your power,” Heggins said. “Don’t give it up, because too many people have fought hard for so many marginalized groups in our country to have the privilege to vote.”

Ricks said all voters should exercise their right to vote. After going to the forum, Ricks said she recognized that students need elected officials to return after the election to listen to them and find out what their needs are.

“We have a bad habit of assuming what people need rather than listening to them and getting their opinion of what they need,” Ricks said.

The early voting turnout so far has surpassed the 2017 municipal election. In 2017, 1,614  people voted at one-stop polling. By the close of polls Wednesday, 1,894 people had cast a ballot, with 250 people voting Wednesday.

One-stop voting continues at the Rowan County Board of Elections Office, 1935 Jake Alexander Blvd. W., from 7 a.m. to 7 p.m. Thursday and Friday. Election Day is Tuesday, with municipal polls open from 6:30 a.m. to 7:30 p.m.