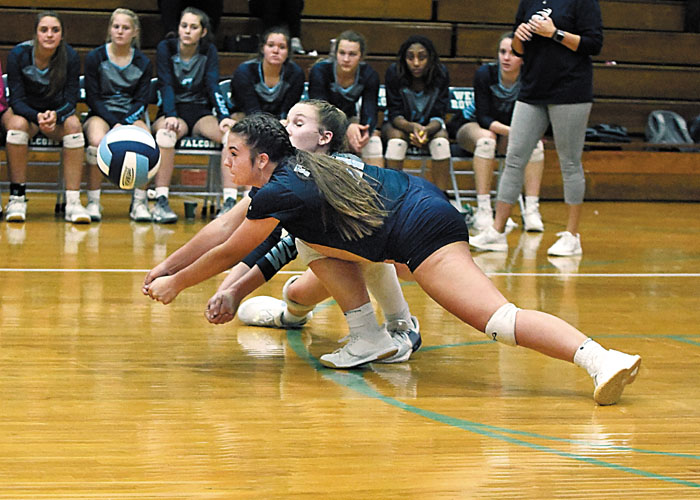 West Rowan Brooke Kennerly and Tori Hester, during Tuesday's match. On Thursday evening, West defeated T.C. Roberson, 3-1, to move on in the state 3A volleyball playoffs. ... File photo by Wayne Hinshaw, for the Salisbury Post

“Our blocking was really on,” said Hester, who had 24 kills and 26 digs to go with her five blocks. “And every block means huge momentum.”

Volleyball blocks are similar to basketball dunks. Send a strong hit right back where it came from, and the crowd goes crazy. It usually takes an opponent a minute to regain composure. And in a minute, a team as sharp as West Rowan (27-0) can spurt with three or four quick, unanswered points.

“Roberson was tall, just really big,” West head coach Jan Dowling said. “But we were more explosive. We didn’t have all of our legs tonight after such a tough (five-set) match on Tuesday, but we had enough. We had so many great blocks tonight. I was shaking my head. I kept asking myself, ‘Is this really us?’  It was awesome to watch.”

The first set was tight and tense. West never got control until the end. Clinging to a 20-19 lead after three straight points by the Rams, the Falcons got a timeout and refocused. Kills by Hester, Dowling and Gusler came in a flurry out of that timeout, as the Falcons took charge.  Gusler, West’s shortest hitter at 5-foot-6, smacked another kill for set point.

“I think we played well together,” said Gusler, who had five kills. “It’s just started to hit the seniors — Tori, Carly and me — that every game now could be our last. We brought our games up tonight. We calmed things down when we needed to settle down and we built everyone up when we needed to fight harder.”

West didn’t went flat early the second set, but rallied from a six-point deficit to get even at 18-all on a kill by Dowling. But TCR’s Julia Bankard made all the key plays down the stretch, and the Falcons dropped the set. Hester had a very quiet set and was double-blocked several times.

“We just got off in that set,” West setter Noe Gaeta said. “It was everybody. Usually, for us, it’s all about energy. Our energy got down and we knew we had to get it back for the third set.”

West  got its mojo back quickly, jumping out 5-1, pushing to 15-6 and never giving the Rams an opening to climb back into the set.

“That third set, the way we started out, that’s when I knew we were going to do it tonight,” Hester said. “As off as we were in the second set, we didn’t let that bother us.  No one got down. We kept a positive attitude.”

A super dig by freshman libero Brooke Kennerly led to the kill by Hester that ended the third set. West owned a 2-1 lead.

“We watched film of T.C. Roberson for about 30 minutes at our last practice,” Kennerly said. “They have really good hitters, but we had an idea where they were going to try to go with the ball and we knew when to take a step in or shift over a step toward the middle. A lot the time, we were in the right spots.”

The Rams (28-4) fought fiercely for the fourth set. West never could pull away, but the Falcons made the key plays at the end. Stiller and Love came through with back-to-back points at the net that boosted a precarious 22-20 lead to 24-20, and the Falcons were headed for the fourth round.

“We knew our hitters were going to get blocked some tonight by Roberson’s height, but our little girls did a great job of covering the hole if we got blocked,” Coach Dowling said. “They got to a lot of balls and kept balls alive. Everyone who played tonight contributed quite a bit, and the bench stayed up. It was a great team win.”

NOTES:  No. 4 seed Watauga (26-0) will play West in Mount Ulla in a regional semifinal on Saturday. That match will be played late in the afternoon (time TBA). … KK Dowling had 14 kills, 14 digs, three aces and three blocks. Stiller had seven kills and four blocks. Love had four kills and five blocks. Kennerly had 12 digs, while Ashlee Ennis had six. Gaeta, a sophomore who took over at setter when Allison Ennis was injured, was good. She had 50 assists, 17 digs and three kills.

High school football: Defense is the name of the…