High school football: Defense is the name of the game 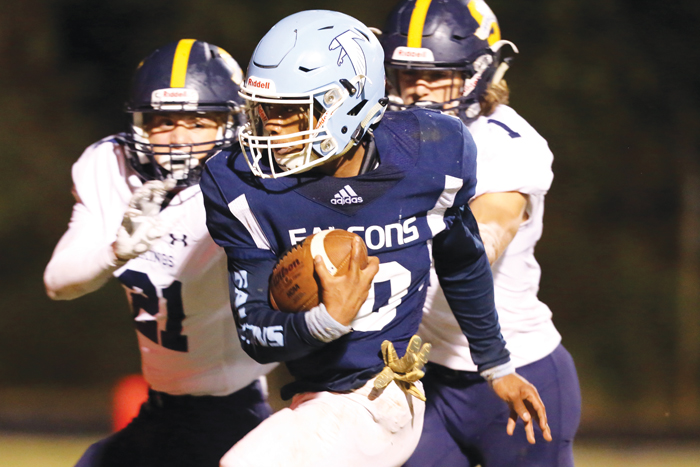 Salisbury (8-1), North Rowan (7-3) and West Rowan (6-3) have defenses that are rated significantly stronger than their offenses by the computer wizards who compile the Massey Ratings.

North’s ratings are hurt some because the Cavaliers play some of the state’s weakest teams in the Yadkin Valley Conference, but looking at the numbers, it’s obvious North is good defensively. North is allowing just 149 yards per game, almost equally split between ground and air. Opponents average 13.3 points per game.

Salisbury allows even fewer rushing yards (72 per game) and passing yards (57 per game) than the Cavaliers. Even with several defensive scores against the Hornets, opponents are managing just 6.6 points per game. That’s not a record-setting pace, but it’s among the best in school and county history.

Then there’s West Rowan, which allows 180 yards per game and 13.6 points per game. West has faced exceptional quarterbacks such as Davie’s Nate Hampton and Cox Mill’s Varney Farnhbullah,  but has allowed just 101 passing yards per game. As is almost always the case, West is clamping down on the run, holding opponent to 80 yards per game.

During its state championship years (2008-10), West’s defenses allowed 9 points per game for a three-year stretch. The best statistical “D” of the three was the 2010 unit that allowed 7.1 points per game.

West Rowan’s defense also had some fun last Friday, crunching No. 349 North Iredell 44-0 and holding the Raiders to negative rushing yards.  West also has two shutouts. West has allowed just 13 points in its three North Piedmont Conference games. East Rowan and South Iredell scored one TD each against the Falcons, and those are teams that normally put up some points.

The concern with the playoffs approaching is that while West is 6-3, the Falcons are 1-3 against teams ranked in the  state’s top 100 by Massey Ratings. West is ranked 86th in the state. The Falcons’ losses were to No. 41 Mooresville, No. 52 A.L. Brown and No. 68 Cox Mill. West’s most impressive victory, by far, came against No. 60 Davie.

The highest-rated 3A team in the state is No. 4 Weddington.

The highest-rated 2A team in the state is No. 18 Shelby.

North Rowan is ranked 199th in the state, cracking the top 200 after whipping North Stanly. The highest-rated team North Rowan has beaten this season is No. 201 East Rowan.

As far as tonight’s games, the headliner for Rowan is definitely is the Salisbury at North Davidson matchup. West Rowan is at Carson, and there’s always significant interest in intra-county games, even one that is almost certain to be one-sided. South Rowan hosts Central Davidson in a CCC game. East Rowan has a tough NPC matchup at unbeaten Statesville. A.L. Brown plays at Robinson in the South Piedmont Conference.  In the always intriguing Central Piedmont Conference, Davie goes to East Forsyth.

North Rowan is off tonight. The Cavaliers return to action next week for what looks like a routine win against No. 391 South Davidson.

Scott agrees, except he likes Davie over East Forsyth, and who knows when it comes to Davie?

I’ll mirror Marny’s picks, which is always risky. I think Salisbury-North Davidson is a 50/50 game in Welcome. Hopefully, the Hornets will get the bounces.

Statesville is really talented. Very good quarterback and very good defense. The Greyhounds’ No. 2 running back Caylon Imes cantered for 300-plus yards at Carson last week.

East had more than enough offense to win last week at South Iredell, as Pinckney and Vincent Jones wild-catted for more than 400 combined rushing yards, as but the Mustangs just couldn’t stop the Vikings in the fourth quarter.

East Rowan’s offense is ranked 176th in the state, while the defense is 214th. The Massey Ratings give East a 3 percent chance of shocking the world tonight. The Mustangs are 28-point underdogs.

John Fitz will be back at East’s helm this week. He was at Fort Sill in Oklahoma last Friday for his son, Jax’s, graduation from Army Basic Training.

East is 2-13 against the Greyhounds. The teams actually played twice last year, with Statesville winning 53-3 in the last game of the regular season and 7-6 in the first round of the playoffs.

East’s most recent win over the Hounds was in 2009.

Field conditions at Carson were not ideal last week and there’s been a lot more rain, so mud might slow down Houston a little. He’s only been a running back the last six weeks, but the sprinter  has topped 1,000 rushing yards. He scored four TDs last week.

Carson’s offense is ranked 266th, while the defense is 281st. It’s very probable that the extra-large Falcons will control the line of scrimmage, no matter which team has the ball.

West is a 35-point favorite with a 99 percent win probability and is expected to roll into next week’s showdown in Mount Ulla with Statesville for the NPC title.

Despite the Hornets’ superior record, many people consider North Davidson the favorite.

That’s due to home-field advantage and recent history. North Davidson was state runner-up last season and destroyed Salisbury 49-13 and 45-0 in the two recent meetings.

North Davidson is difficult to run outside against, so the Hornets will have to connect on passes to loosen things up.

This is a really gigantic game for the Hornets as far as where they’ll be seeded in the playoffs. If they win, they’re just about certain to finish 10-1, as they’ll be an overwhelming favorite against South Rowan next week.

A loss to Thomasville on Oct. 11 knocked North Davidson out of the CCC race. The Black Knights also fell to CCC frontrunner Oak Grove and to 4As Davie and Parkland, although all four of their losses were highly competitive games.

Central Davidson takes its tightly packed  “phone booth” offense on the road and will try to trample the Raiders with a straight-ahead, physical ground attack.

Even though the teams have equal conference marks, the Spartans have generally played better and are favored by two touchdowns, with a win probability of 79 percent.

South’s offense is ranked 272nd in the state, while the defense is 337th.

South has a chance, though, and showed in last week’s road win that it’s still competing.

East Forsyth is 1-2 in the CPC, but is ranked ninth in the state by the Massey Ratings, which tells you something about how fierce the CPC is.

East Forsyth has the state’s sixth-ranked offense and 14th-ranked defense.

Davie has massive splits between its offensive and defensive ratings, with an offense that’s ranked 14th in the state and a defense that is 154th.

Defense is expected to be the issue for the War Eagles tonight. Davie is a 23-point underdog, with a projected 47-24 loss.

Davie has a win probability of 6 percent, but it was given an even slimmer chance when it stunned West Forsyth.

Not that anything is predictable when it comes to Davie, but East Forsyth has flattened Davie 49-14 and 35-7 the last two seasons.

Not quite a sure thing for the Wonders, but it’s close. They are given a 96 percent probability of logging their sixth win.

That’s not surprising. Concord is 1-8, and the Spiders’ win came against Robinson.

A.L. Brown’s offense is ranked 68th mostly because Jakhiry Bennett has turned in more than 1,100 rushing yards, despite missing a game.  The passing game hasn’t produced any touchdowns the last two weeks, but the Wonders will try to get their aerial assault back on track tonight.

Defensively, the Wonders are strong and are ranked 57th in the state.