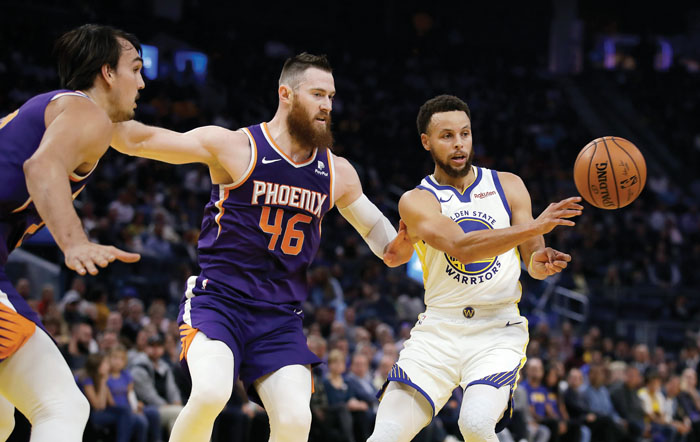 By JANIE McCAULEY AP Sports Writer
SAN FRANCISCO (AP) — Stephen Curry broke his left hand and became the latest injured Warriors player when he fell hard in the third quarter of another embarrassing defeat by Golden State, 121-110 to the Phoenix Suns on Wednesday night.
The two-time MVP drove to his left defended by Kelly Oubre Jr. and with big man Aron Baynes standing solidly in the paint. Curry leapt with the ball then came down head first landing awkwardly on his hands to brace himself from the court, with Baynes crashing onto Curry’s left hand. Curry grimaced in pain grabbing at his fingers then walked to the locker room with 8:31 left in the third quarter.
Baynes had 24 points, 12 rebounds seven assists and three blocked shots, Devin Booker scored 31 points as the Suns jumped out to a huge lead they never relinquished. The Warriors have lost badly in their first two home games at sparkling new Chase Center.
The ailing, undermanned Warriors welcomed back two players but still fell behind 39-11 shooting 4 for 17 as the Suns made 14 of their first 23 shots and 8 of 12 3-pointers.
Curry had nine points on 3-for-11 shooting before getting hurt.
Losing Curry, Golden State’s longest-tenured player and oldest at age 31, for an extended period would be a huge blow for a young Warriors team.
Golden State is struggling to start the season with Kevin Durant’s departure to Brooklyn and Klay Thompson out for perhaps the entire season recovering from July 2 surgery to repair a torn ACL in his left knee.
This was another rough one after an embarrassing season opener in the first game at Chase Center, a 141-122 loss to the Clippers last Thursday that saw some fans leaving after the third quarter.
Golden State returned home with a 1-2 record and amid a stretch with five games over seven days and two back-to-backs.
The Warriors trailed 72-46 at halftime Wednesday after falling behind 70-37 at the break in Oklahoma City on Sunday.
Golden State center Willie Cauley-Stein, who missed all of training camp with a sprain in his left foot, had 12 points and five rebounds in his Golden State debut. He checked in for the first time at the 8:23 mark of the first quarter.
LGBTQ NIGHT
The Warriors held LGBTQ Night with a panel following the game featuring Golden State COO Rick Welts — the first openly gay NBA executive — WNBA and Olympic champion Sue Bird of the Seattle Storm and her partner, Megan Rapinoe, of the World Cup-winning U.S. women’s soccer team.
Warriors coach Steve Kerr tried to connect with Rapinoe over the summer to have her speak to the World Cup basketball team he coached that went to China. It didn’t work out but he hoped to get a few minutes with her Wednesday.
“She’s such an incredible athlete and advocate and Sue has been one of the best women’s players in the game for a long time,” Kerr said. “I know Rick is close with both of them so it’s important I think, especially on a night like tonight where we’re celebrating the idea of being accepting of everyone, it’s great to have them here.”
The women also spoke to members of the Warriors organization earlier in the day.
Bird and the U.S. women’s basketball team play at Stanford on Saturday.
TIP-INS
Suns: Phoenix beat Golden State for just the third time in the last 21 regular-season meetings. … The Suns’ 115-111 win at Golden State on March 10 this year snapped an 18-game losing streak to the Warriors and a 14-game road skid in the series. … Suns assistant coach Willie Green spent the past three years with the Warriors.
Warriors: Kerr said F Kevon Looney, who missed his fourth straight game because of a right hamstring injury, is scheduled to be evaluated early next week by a team of specialists because of an “on-going presence of a neuropathic condition in his body, which has a direct correlation to his recent injury.” Looney is limited to controlled workouts with the training staff for now. “He’s frustrated and we’re frustrated for him,” Kerr said. … Rookie Eric Paschall made his first career start. … Alec Burks, who missed all five preseason games and the first three of the regular season, also returned for the Warriors and scored seven points in his first game with Golden State. … G Jacob Evans III sat out Wednesday after exiting Monday against the Pelicans in the first quarter with a left adductor strain.
UP NEXT
Suns: At Grizzlies on Saturday.
Warriors: Host Spurs on Friday in the first of two games in two nights with Charlotte visiting Saturday night.
___
More AP NBA: https://apnews.com/NBA and https://twitter.com/AP_Sports