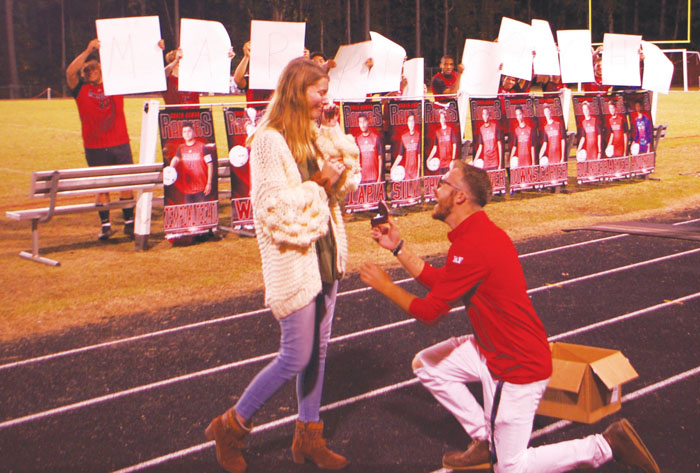 Down on a knee, South Rowan High School soccer coach Rusty Fisher asks Madison Marshall for her hand in marriage at halftime of Tuesday night's game. He had help from players. The seniors behind them hold up cars saying, 'Marry Coach.' Mark Wineka/Salisbury Post

Fisher had just dropped to one knee to ask his girlfriend, Madison Marshall, a question.

And the question was revealed by South Rowan’s senior players behind the couple. They held up big posters whose individual letters spelled out the entreaty — “Marry Coach!”

Marshall took the players’ appeal to heart and said yes, or at least she thought she did. Later, when play had resumed and everyone had settled down as much as possible, Marshall said all she really remembered was nodding in the affirmative.

Fisher had been scheming for this moment for several weeks. It was supposed to take place tonight, but because of a menacing weather forecast the game — and Senior Night — was moved ahead one day to Tuesday.

It seemed like everyone but Marshall, a senior theology major at Catawba College, knew what was up. Members of the couple’s church, Destination Hope in Granite Quarry, were in the crowd. Family members and Catawba College friends also were on hand.

Fisher’s ruse was to ask Marshall down to the track at halftime to help him greet and give out gifts to his 12 seniors and their families. It was a night full of hugs, balloons, flowers and ceremony.

Marshall started becoming suspicious when all the players had been introduced and Fisher told her to stay on the track with him. She grew even more nervous seeing the seniors move toward a bench, where their cards awaited.

“I had a feeling the guys were going to have something to do with it,” Marshall said. “… And he (Fisher) was shaking like crazy.”

Still, until Fisher dropped to a knee, Marshall thought maybe the players were doing something for their coach, not her.

Fisher, 26, and Marshall, 21, met at Life Church two years ago. They’re both good singers and have become worship leaders at their new church, Destination Hope.

Marshall is from Clemmons, and Fisher grew up in Rowan County, graduated from East Rowan High and attended Liberty University for several years. Today, he sells cars for Gerry Wood and is in his second year as head coach for the Raiders.

Marshall’s parents, Suzanne and Tony Marshall, were in the crowd, along with Fisher’s mom, Jill. They dished out a lot of hugs after halftime. Jill Fisher was thrilled her son could make his marriage proposal with the players’ help.

“They wanted to be part of this,” she said.

Several Catawba College friends sat with Marshall during the game, including freshman Rebekah Davis, whose mission was to get Marshall to the game.

“I didn’t come for the soccer,” Davis admitted to Marshall later.

There was a time earlier in the week when Davis had concerns about the plans. Tonight, the women were scheduled to go to a sorority function at school, so it actually turned out well that the game was rescheduled.

So what happened in the game between South Rowan and Salisbury? The Hornets won 7-6 on penalty kicks, but if you sat around Madison Marshall after halftime, it was hard to concentrate.

Her mind was somewhere else.

For local veterans, Frontier Coffee Shop is more than…