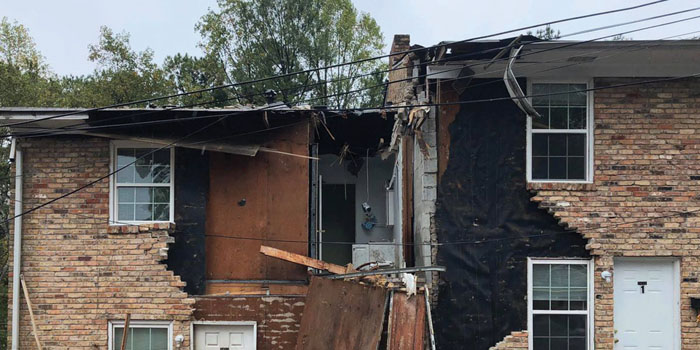 The owner of the plane was not onboard but two other people, including one man who is a local business owner, were onboard at the time of the crash. DeKalb County Fire Rescue photo

ATLANTA — Two people have been confirmed dead after a single-engine plane bound for Mid-Carolina Regional Airport in Rowan County crashed in Dekalb County, Georgia, according to a Dekalb County spokesman and multiple media outlets.

He confirmed the plane was on its way to Rowan County.

Crews from the DeKalb County Public Safety Unified Command were on the scene just after 10 a.m., according to a timeline on the county’s website.

No injuries were reported at the townhouse complex. Displaced families were being assisted by the American Red Cross.

The National Transportation Safety Board is investigating the accident.

The owner of the plane was not on board but two other people, including a man who is a Rowan County business owner, were on board at the time of the crash, WBTV reported. The Post was unable to confirm that reporting.

“At this time, our thoughts and prayers are with the passengers’ families,” said Valerie Steele, director of Mid-Carolina Regional Airport.

No other details were provided about the identity of those on the plane.

Deputies responding to spike in calls at Hanford Dole…