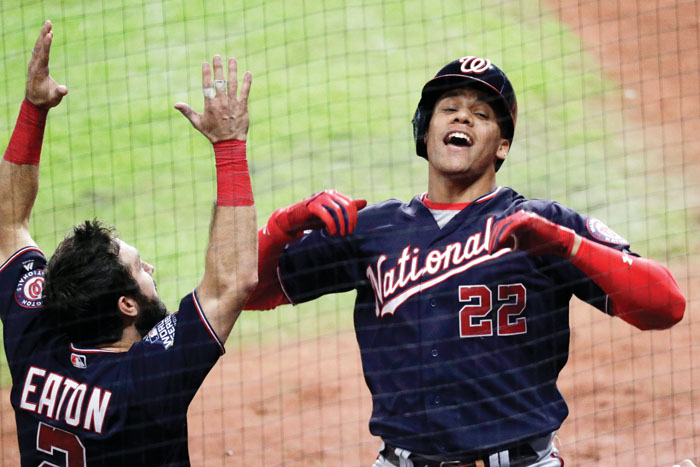 By RONALD BLUM AP Baseball Writer
HOUSTON (AP) — Stephen Strasburg took a gem into the ninth inning and Juan Soto ran all the way to first base with his bat following a go-ahead home run, the same way Houston slugger Alex Bregman did earlier.
Yep, these Washington Nationals have matched the Astros pitch for pitch, hit for hit, win for win — even home run celebration for home run celebration.
Adam Eaton and Soto hit solo homers off Justin Verlander in the fifth, Anthony Rendon also went deep and drove in five runs, and the Nationals beat the Astros 7-2 Tuesday night to tie the World Series at 3-3.
Now, it’s onto a winner-take-all Game 7 to decide the first Fall Classic in which the visiting team won the first six.
“It’s weird, really. You can’t explain it,” Washington manager Dave Martinez said.
Fired up after a disputed call at first base went against them in the seventh, the Nationals padded their lead moments later when Rendon homered off Will Harris. Martinez, still enraged at umpires, was ejected during the seventh-inning stretch, screaming as a pair of his coaches held him back while the crowd sang along to “Deep in the Heart of Texas.”
Rendon added a two-run double off Chris Devenski in the ninth to just about seal it after Strasburg gutted through without his best fastball to throw five-hit ball for 8 1/3 innings.
Washington pitching coach Paul Menhart told Strasburg after the first inning that he was tipping pitches. Strasburg allowed only three more hits.
“Started shaking my glove, so they didn’t know what I was throwing,” he said. “It’s something that has burned me in the past, and it burned me there in the first.”
Nationals ace Max Scherzer, boosted by an injection of painkiller, is primed to return from an irritated nerve in his neck to start Game 7. Scherzer was warming up in the seventh before Rendon’s homer, then sat down as Martinez became the first manager tossed from a Series game since Atlanta’s Bobby Cox in 1996.
“Anytime we get Max on the mound for us, we like our chances,” Rendon said.
Now the Nationals will attempt their ultimate comeback in a year in which they were written off time after time, hoping for the first title in the 51-season history of a franchise that started as the Montreal Expos and the first for Washington since the Senators in 1924. Zack Greinke will be on the mound for the Astros, who led the majors with 107 wins and are seeking their second title in three seasons.
Visiting teams have won three straight Game 7s in the Series since the Cardinals defeated Texas at home in 2011.
Washington rebounded from a 19-31 start — the Nats were given just a 1.6% chance to win the Series on May 23 — to finish 93-69. They rebounded from a 3-1 eighth-inning deficit against Milwaukee in the NL wild-card game, a two games to one deficit vs. the Los Angeles Dodgers in the Division Series and a 2-1, fifth-inning deficit in Game 6 vs. the Astros.
Outscored 19-3 at Nationals Park while going 1 for 21 with runners in scoring position, the Nationals got the strong outing they needed from Strasburg, who allowed his only runs in the first inning, struck out seven and walked two while throwing 104 pitches.
“It was a mental grind out there, especially after the first,” Strasburg said. “Just got to keep fighting.”
He improved to 5-0 with a 1.98 ERA in six postseason starts this October despite failing to get a swing and miss in the first two innings for the first time this year, and eight of nine swings and misses overall were on breaking balls. Strasburg escaped a two-on, two-outs jam in the fourth by striking out Carlos Correa.
After George Springer’s one-out double put runners at second and third in the fifth, José Altuve struck out on curve in the dirt and Michael Brantley hit a hard grounder to second.
“Stras is doing Stras things out there,” Rendon said. “It’s been amazing.”
Sean Doolittle got the final two outs as the Nationals bullpen headed into Game 7 relatively rested. He gave up a two-out double to Correa before retiring Robinson Chirinos on a popup.
Verlander dropped to 0-6 with a 5.68 ERA in seven Series starts, a blemish on his otherwise sterling career.
In the first game with lead changes since the opener, Rendon’s RBI single through a shifted infield put the Astros ahead in the first. Verlander gave up 10 runs in the first inning during six postseason starts this year after allowing 12 during 34 regular-season outings,
Houston needed just four pitches to tie the score. Springer lined a fastball off the left-field scoreboard, at 112 mph off the bat the hardest-hit ball of the Series. He advanced on a wild pitch and scored on Altuve’s sacrifice fly to left, easily beating Soto’s throw.
Bregman put the Astros ahead on Strasburg’s 12th pitch, driving a fastball into the Crawford Boxes over the left-field scoreboard for his fourth home run of the postseason and third of the Series. Bregman carried his bat out of the batter’s box and tried to hand it to first base coach Don Kelly, only for the bat to fall as Kelly stuck out his hand for a shake.
Eaton tied the score in the fifth when Verlander hung a slider. Soto, who homered at age 20 in the opener, followed one out later with his second long ball after turning 21. He lined a high-and-inside fastball into the right-field upper deck, a no-doubt drive Verlander didn’t bother to watch.
Soto, too, flipped the bat at his first base coach, Tom Bogar.
“I don’t think there’s a person in the building that would have assumed that all road teams were going to win,” Houston manager AJ Hinch said. “We’ve just got to make sure that last one is not the same.”
___
More AP MLB coverage: https://apnews.com/MLB and https://twitter.com/AP_Sports