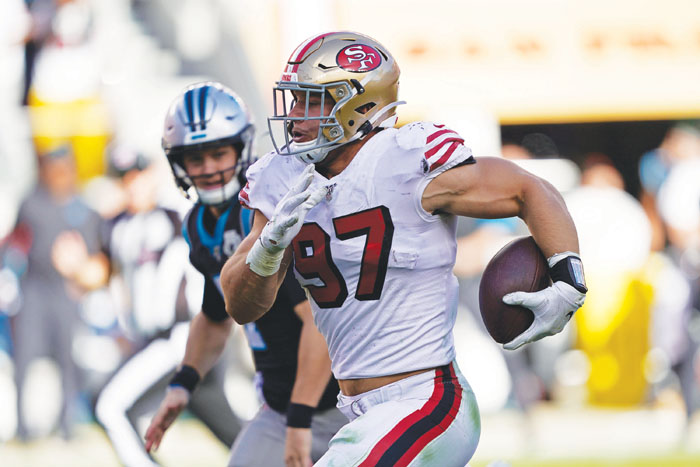 AP Photo/Tony Avelar ... San Francisco 49ers defensive end Nick Bosa runs with the ball after making an interception during the second half of an NFL football game against the Carolina Panthers in Santa Clara, Calif., Sunday. The 49ers play tonight at Arizona.

Jim Tomsula and Chip Kelly couldn’t do it in their one season as head coach in San Francisco. Kyle Shanahan hasn’t done it in two years with the 49ers.

The past three coaches in San Francisco have combined to lose eight straight games against the NFC West rival Cardinals heading into the first meeting this year Thursday night in Arizona.

The Niners’ last victory in this rivalry came in Jim Harbaugh’s final game as coach in 2014 when the playoff-bound Cardinals lost a most meaningless Week 17 game in San Francisco. It’s not as if the Cardinals have been world-beaters during this stretch. After winning 13 games in 2015, Arizona hasn’t had a winning record the past three seasons despite sweeping the 49ers.

Last season’s result was most glaring as Arizona won both meetings and only one other game in a 3-13 campaign.

This season, the Niners (7-0) come into the game tied for second in the AP Pro32 power poll and are one of two remaining undefeated teams, while the Cardinals (3-4-1) are 21st and once again have a losing record.

Could the streak continue even though San Francisco is favored by 10 points? …

KNOCKOUT POOL: The AP prognostication crew is still alive after eight weeks but it’s getting tougher to find good choices still available. Considered taking the Jets at winless Miami but remembered they are still the Jets.

So the pick will be SAN FRANCISCO.

The Texans needed a goal-line stand to beat Gardner Minshew and the Jaguars in Week 2 but won’t have J.J. Watt in the rematch.

The Bills didn’t have enough to handle the Eagles last week, but Washington should be a lot easier.

Ryan Tannehill won his first two starts in place of Marcus Mariota for the Titans, while Kyle Allen lost his first in place of Cam Newton. That trend won’t continue.

Eagles have struggled in the secondary. That shouldn’t be a problem against Mitchell Trubisky and the Bears.

Patrick Mahomes’ status remains in doubt for Chiefs but no way they lose four straight at home, especially with how well Andy Reid’s offense is functioning with Matt Moore at the helm.

If Dolphins are going to win a game this figures to be one of their best chances. Nope, maybe wait for the Bengals in Week 16.

Steelers got back into contention by beating winless Dolphins. The Colts offer much stiffer competition.

The Raiders look to give home fans something to celebrate in their first home game since Week 2.

The Browns were unable to dig out of an early hole last week at New England. Beating the Broncos with backup Brandon Allen at QB should be a bit easier.

Chargers got lucky to win at Chicago last week. That might be just enough to provide momentum against the much tougher Packers.

The Cowboys have beat up against bad teams except for a loss at the Jets. No way they lose twice at the Meadowlands.