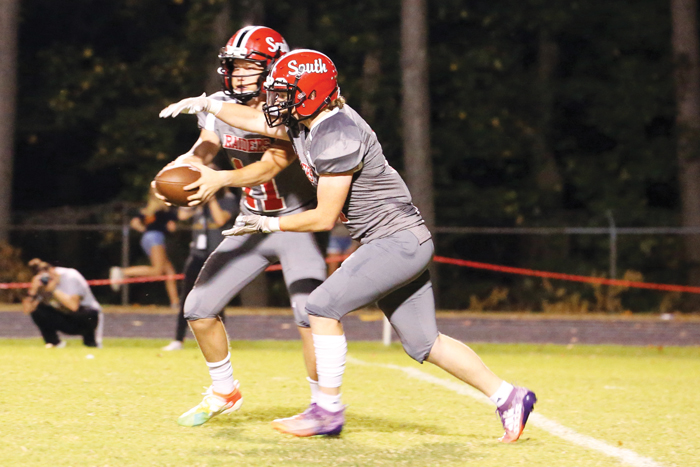 JON C. LAKEY/SALISBURY POST ... South Rowan running back Brayden Garrett (2) takes a handoff from quarterback Drew Huffman, during a game this season against North Davidson. Garrett and the Raiders had a big win last Friday at Lexington.

LANDIS — South Rowan and Lexington had combined for two wins and 14 losses, so it was supposed to be the who-cares game of the week.

As it turned out, South cared a lot. Lexington, celebrating homecoming at historic Philpott Memorial Stadium, cared just as much.

Friday’s back-and-forth Central Carolina Conference struggle turned out to be one of the more exciting games of the year. South won it, 27-22.

The key figures for the Raiders would be guys with similar names — stocky running back Brayden Garrett (5-11, 185) and slim receiver Braden Graham (6 feet, 140). They don’t look anything alike, but even head coach Daniel Yow gets them mixed up when he’s trying to remember which member of his Braden bunch did what.

“We wanted to win bad at Lexington,” Garrett said. “It doesn’t matter what your record is. Every game you play is a chance to show how much work you’re putting in. We’ve played a lot of good teams and we’ve lost, but we haven’t stopped putting in the work every week.”

South played the game without receiver/running back/returner Nathan Chrismon, who had scored nine of the team’s 19 touchdowns. That’s almost half. He’s out for the season with a shoulder injury.

Garrett and Chrismon had been splitting the carries, so that meant Garrett, a 5-foot-10, 185-pound senior, would be carrying the offensive load. The Raiders’ game plan offensively was to run the ball early and often.

“You look at Lexington and they’re a lot better than their record,” South head coach Daniel Yow said. “They’ve got athletes all over the place. We wanted to keep their offense off the field. We wanted drives and first downs. We wanted to chew the clock and keep the ball.”

On Garrett’s first touch, he rolled for almost 30 yards. That was a good start.

“He’s quicker than people think,” Yow said. “They tell me his dad was really fast.”

But a lot has changed. Since Carson opened 4.7 miles away in 2006, South has enjoyed only one winning football season, and that was 10 years ago. A 4A school when Keith Garrett was running wild, it’s now a 2A school. South is still good in a lot of sports, but football is the sport people notice most. And football, for South, has become an annual struggle for respect.

Lexington enjoyed major glory days of its own, rolled to state titles, but its last CCC co-championship came 15 years ago. Now the Yellow Jackets are in the same football boat as South, fighting for every win, scrapping to stay out of the basement in a 10-team league.

South did everything it wanted to do in the first half. South’s defense, which has allowed 40 points per game, bent, but refused to break. South controlled the game and got a touchdown apiece in the first half from Graham and Garrett.

“We were pounding it right at them,” Garrett said. “Just punching them. Inside, outside. I’d say everything we did was working.”

Graham’s touchdown came on an extended pass play. The initial play broke down, but the Raiders executed in their scramble drill.

“I ran my route, but I was covered, and then I saw (South QB) Drew Huffman was still moving around,” Graham said. “So I ran around the defensive back. Drew had the time to see me and he make the throw. I was excited to score. It was only my second touchdown of the season.”

His first TD had come on Sept. 13 against East Davidson, in South’s only other victory, but the Raiders had won that game easily. This one would be a lot tougher.

“It was homecoming, so there was a very extended halftime, and I was worried about that,” Yow said. “After that good first half, I was afraid we’d come out flat — and we did.”

It see-sawed in the fourth, with South scoring, and then Lexington inching ahead 22-21 with a touchdown and a 2-point conversion.

“That’s when we could’ve shut down,” Yow said. “We hadn’t won in a while, we’re on the road, and Lexington was playing very well. But we didn’t shut down. Guys stepped up and made some plays.”

The biggest would be made by Graham.

The clock moved under the 5-minute mark. South still trailed by a point. The Raiders faced fourth-and-long at the Lexington 15. South put double receivers to each side. Graham was one of the two on the right.

Huffman, as he so often does, extended the play with his legs. Then he let the ball fly toward Graham, who was almost in the back of the end zone.

“We’re yelling at Drew because it looked like he could’ve run for the first down there, but he threw the ball,” Yow said with a laugh.

It was one of those no-no-no …. yes-yes-yes plays.

“I was running a post corner, and I saw the ball coming, but two Lexington guys got hands on it and deflected it,” Graham said. “I still caught it, kind of diving for it, but I caught it.  Basketball is my best sport. I’m kind of skinny and I know there are guys who are better than me in football, but I scored two touchdowns. That’s exciting.”

The Raiders were due a break. They got one. Graham made it happen.

“Great circus catch,” Yow said. “He was rolling on his back when he caught it.”

Besides his pair of TD catches, Graham had two other receptions for first downs.

While it took a little luck for the Raiders to stop a five-game skid, they also did a lot of things right.

Even after the go-ahead touchdown with four minutes left, South’s defense had to get a stop. Then South’s offense had to kill the clock by making one last first down.

“We ran the ball well, had three scoring drives of at least 10 plays,” Yow said. “Most of it out of the I-formation with Brayden Garrett at tailback and Harrison Shell or Landon McGee in the backfield with him. Brayden played all but about four snaps. He was the workhorse we needed, and he had his best game.”

They’re still putting in the work.