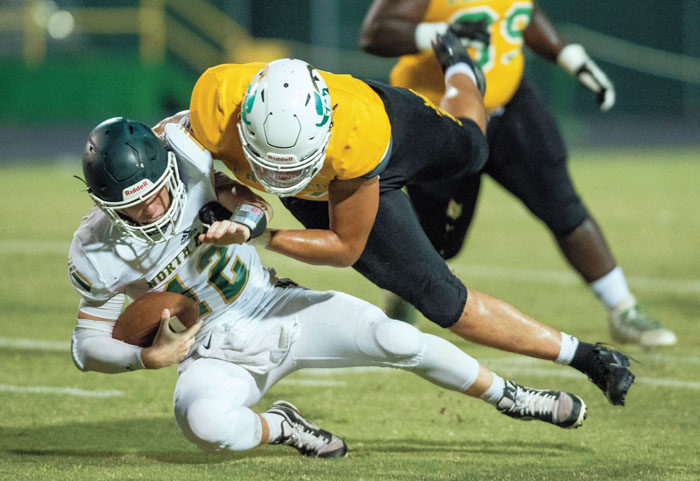 SPENCER —Statistics are fun to look at, but sometimes there’s a rest of the story.

“Depending on where Jefferson lines up, he can make people go the other way,” North head coach Ben Hampton said. “The tackles that he gets, that’s usually running guys down on the back side.”

The Cavaliers’ defensive game plan frequently calls for Jefferson to force ball carriers into the waiting arms of powerful linebacker Jordan Goodine, who has 29 tackles for loss and averages 13.3 tackles per game.

Jefferson is one of the county’s most imposing athletes. He’s 6-foot-5. He says his weight rose to 280 pounds last year, but he’s playing this season at 245. He passes the eye test, still huge, but trim and fit.

Jefferson is a familiar name to Rowan sports fans. He’s been around a while. He was large enough and agile enough to make an impact for East Rowan’s varsity basketball team when he was a freshman. He played three hoops seasons for the Mustangs and made a football comeback as a junior. East used him primarily as a tight end to open holes for Sammy Pinckney.

“We found out he was moving to Spencer during the off season,” Hampton said. “I’d seen him in basketball mostly and I’d always felt like he was a talented guy with unreal athletic ability for someone his size. He started coming to practice and started doing his thing. Most of our guys already knew him, and he blended right in. He’s a pleasant guy. He smiles a lot. We’ve been happy to have him.”

Jefferson, who handles kickoff duties for the Cavaliers and has kicked five PATs, still thinks of himself as a basketball player first, but he’s started to attract some FCS-level recruiting interest in football. There are a lot of 6-5 basketball players, but his size and skill set are more uncommon on a football field.

“Basketball is what I love, and I’m really looking forward to this season,” Jefferson said. “But right now, I’m enjoying football. It’s been a lot of fun surprising people in this league. They don’t expect me to be as fast as I am.”

Hampton said the Cavaliers have had the luxury of outstanding defensive ends in recent years — players such as Virginia Tech signee Zion DeBose, Jake Pritchard and Darren Williams —  and Jefferson fits right in. He’s been, by far, North’s top pass rusher, registering 10 sacks. He’s been credited with 25 QB hurries.

Jefferson had sacks in North Rowan’s early games with Salisbury and West Rowan, but the Cavaliers got off to an 0-3 start. They began a seven-game winning streak when they beat Carson on Sept. 13. That was followed by the comeback win on Jefferson’s return to East Rowan. East ran away from him a lot, but he still made eight tackles.

Next have come five straight Yadkin Valley Conference victories, including key ones against South Stanly, Albemarle and North Stanly that locked up the conference title.

“Our defense has been strong all along, but our offense has kept progressing as the year has gone along,” Jefferson said.

“We like to kick off first because we like to be on defense first where we can let them know we’re going to pop them,” Jefferson said. “But this time North Stanly kicked to us first and we fumbled the opening kickoff. Some guys were dropping their heads coming off the field, but we told them not to worry, that the defense would stop them.”

North Stanly took over at the North Rowan 35 and made two first downs. But the Cavaliers stopped the short-field drive at the 9, and the Comets missed a short field goal. That was big.

Then North Rowan drove 80 yards to take the lead. That was bigger.

With North Rowan leading 22-0, the Cavalier failed on a faked punt. That helped North Stanly score on a pass play on the final play of the first half.

“I was feeling it, I guess, and my thinking was that if we executed on the faked punt and went down and scored, it was all over,” Hampton said. “It backfired, but we didn’t let that one play change momentum.”

That ugly sequence didn’t change momentum long because North Rowan’s defense got a quick stop to start the second half.

“We’d watched film all week, and they were running plays we expected them to run,” Jefferson said. “The kid blocking me was in a two-point stance, so I was always able to get lower than him. I long-armed him and he couldn’t keep my hands off him. I was able to  cause some problems.”

North Rowan’s defense came up with two turnovers (a fumble recovery by Nashid Taab and another Zay Davis interception), forced eight punts and controlled the game. North Rowan’s special teams blocked one of those punts for a touchdown. North Stanly ran 41 offensive plays and gained 59 yards. On 25 rushing attempts, the Comets netted 1 yard.

“Defensively, we played really well in a big game,” Hampton said. “North Stanly likes to run off tackle, but Jefferson was there to meet them and he forced plays back inside. He played at a championship level. He can turn it up to another gear. We just have to get him to play at that gear all the time.”

Sharing the practice field with Jefferson on Tuesday were tall receivers/hoopers Denerio Robinson and Kendrell Goodes.

Basketball is going to be exciting for the Cavaliers, for sure, but for now it’s football, and Jefferson is fine with that.

“Maybe we’ll have a good enough run in the football playoffs that we’ll have to reschedule those early basketball games,” Hampton said, with a smile.

NOTES: Hampton said Goodine made a play on a North Stanly screen that was good as he’s ever seen. … QB Kyree Sims threw for 144 yards against the Comets and continues to improve, as does the offensive line. … North is off this Friday and finishes the regular season with winless South Davidson next week. Then the Cavaliers are probably looking at a bye in the first round of the 1AA playoffs. That’s going to be a long stretch where it’s going to be a challenge to stay sharp and focused.