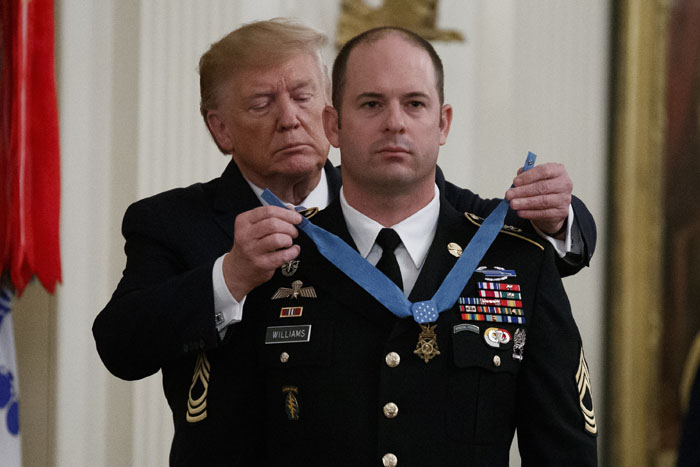 President Donald Trump places the Medal of Honor on Army Master Sgt. Matthew Williams, currently assigned to the 3rd Special Forces Group, during a Medal of Honor ceremony in the East Room of the White House on Wednesday. Alex Brandon/Associated Press

WASHINGTON — As day broke over the mountains of eastern Afghanistan, the Special Forces soldiers of Operational Detachment Alpha 3336 leaped from helicopters into a rocky, fast-moving river.

They would spend the next six hours in that snowy and frost-covered valley fighting for their lives.

The unit, split into three groups and teamed with Afghan commandos, came under an avalanche of fire on April 6, 2008, as the first group climbed a mountain during a hunt for a militant leader. A couple of soldiers were shot almost immediately — the opening salvos of what would be a six-hour battle against an estimated 200 enemy fighters.

On Wednesday, a soldier who braved fire repeatedly to help others became the second American to receive the Medal of Honor — the nation’s highest award for combat valor — for his actions that day.

Master Sgt. Matthew Williams, 37, received the award at the White House from President Donald Trump, becoming the 18th recipient of the award for valor in Afghanistan and the 24th overall since the terrorist attacks of 2001 plunged America into 18 years of war.

“Matt’s incredible heroism helped ensure that not a single American soldier died in the Battle of Shok Valley,” Trump said. “His ground commander later wrote, ‘I’ve never seen a troop so poised, focused and capable during a fight,’ and Matt is without question and without reservation one of the bravest soldiers and people I’ve ever met.”

Trump draped the medal around the Green Beret soldier’s neck in the East Room of the White House, surrounded by colleagues who fought in the battle, family members and eight other recipients of the Medal of Honor.

Williams, meeting with reporters at the Pentagon on Tuesday, downplayed his actions.

“There’s no point in dwelling on how bad the situation really is,” said Williams, who is based at Fort Bragg. “You’re better served to focus on what needs to happen and move toward that goal.”

The battle erupted in Nuristan province’s Shok Valley during a hunt for Gulbuddin Hekmatyar, an Afghan militia leader and warlord whose forces attacked U.S. troops and the Afghan government for years. His fighters unleashed a fearsome attack on the soldiers, firing machine guns, rifles, rocket-propelled grenades and other weapons when they were about halfway up the mountain.

Williams, then a sergeant on his first of five deployments to Afghanistan, was down near the river as Hekmatyar’s fighters ambushed the leading groups of U.S. soldiers.

Retired Master Sgt. Scott Ford, who that day suffered a gunshot wound to an arm that nearly required amputation, said Tuesday that the Americans could tell something was going to happen but didn’t realize immediately how serious it would be.

“Almost as soon as we got off the helicopter, women and children were running — not just leaving, but running — out of the village,” Ford said. “I immediately called the detachment (of Special Forces soldiers) and said, ‘Heads on a swivel. It’s going to go down.'”

The Americans who had begun climbing the mountain first found themselves unable to move as enemy fighters sought to snuff them out. That’s where Williams, Ford and Staff Sgt. Ronald Shurer II, a team medic, thrust themselves further into the fight under fire, as Trump recounted.

“Once they reached their trapped comrades, Matt realized that several of his wounded comrades were too gravely wounded to be quickly evacuated,” said Trump. “He ran down the mountain to get support and then climbed back up with bullets spraying all around.”

Williams is credited with spending an hour climbing the mountain under fire to help remove wounded Americans, maneuvering through the ice-cold, waist-deep river to reach them. Some of the Afghan commandos — then a new force — assisted the Americans by returning fire.

Williams said that in some cases, he was able to maneuver up the mountain on foot. In others, he had to climb hand-over-hand while enemy forces fired.

“It was kind of like background white noise, really,” Williams said of the chaos around him. “Mentally, I was more focused on what needed to happen as opposed to the sights and sounds.”

Lt. Col. Kyle Walton, who was then a captain and detachment commander, was among those pinned down on the mountainside. Williams was always “looking for work” in the battle, maneuvering up and down the mountain to help others, Walton said.

The situation spiraled out of control badly enough that Walton was forced to call in airstrikes on advancing fighters that were “danger close,” meaning the Americans were at risk of getting hit by their own bombs.

“That’s what makes Matt Williams’ action so special, is he was moving in and out of that scenario all day long,” Walton said. “And he continued to do it. He continued to come back and ask for more tasks. You know: ‘What can I do? What do you need?'”

Williams’ Medal of Honor advances understanding about the Battle of Shok Valley’s significance in the 18-year war.

Initially, 11 soldiers involved, including Williams, Walton and Ford, were awarded Silver Stars, two steps down from the Medal of Honor.

Staff Sgt. Zachary Ryner, an Air Force joint tactical air controller who was assigned to the team to direct airstrikes, received the Air Force Cross, one step down from the Medal of Honor. He was credited with directing air support that included 4,570 cannon rounds, nine Hellfire missiles, 162 rockets and more than a dozen bombs.

But after the Pentagon launched a review in 2016 to determine whether service members who earned a Silver Star and up had appropriately been recognized for their valor, the battle received more scrutiny. Last September, Trump notified Williams and Shurer that their Silver Stars would be upgraded to Medals of Honor.

Shurer and Williams said Tuesday at the Pentagon that they were notified about 10 days apart by the president. Shurer was recognized with the Medal of Honor a year ago, but Williams’ ceremony was pushed back because he was about to deploy. His upgraded award was not disclosed until recently.

Shurer, who was hit in the helmet by an enemy round during the battle, described the fight as something of a blur — with the exception of a 2,000-pound bomb that landed nearby.

“That one hit pretty close,” he said with a small smile. “The skies were black, the sound was deafening, and when it exploded, it rained debris down on all of us.”

Matthews said he recently returned from Africa with his team. He plans to remain in the Army and in Special Forces as long as he can. He never thought that his award might be upgraded, he said.