Deputies responding to spike in calls at Hanford Dole Elementary 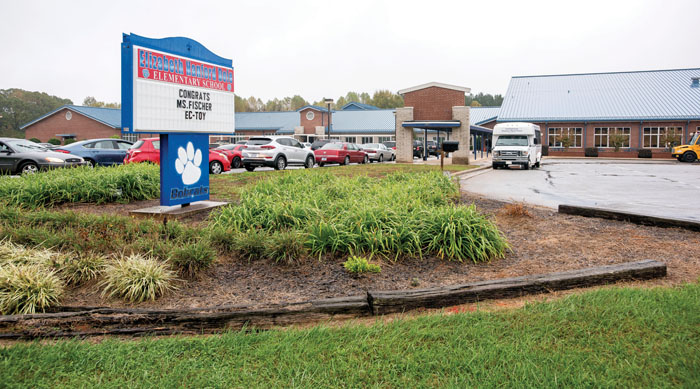 SALISBURY — Since the beginning of the school year, Rowan County deputies have been called to Hanford Dole Elementary School for an unusually high number of incidents, says Sheriff Kevin Auten.

From Aug. 12 through Wednesday, deputies have been sent to the school, located at 465 Choate Road, at least 39 times. Auten said that number includes only times when there was not already an officer on campus.

Many of the calls are about students in the restorative program, which is designed for students with behavioral needs. According to a 2016 Salisbury Post story, the programs are supported by a coordinator, a behavioral technician, an exceptional-children support teacher, a social worker and a behavioral support specialist.

Sgt. Scott Flowers, who supervises the school resource officers division of the Rowan County Sheriff’s Office, said deputies are responding to reports of assault and students cursing and damaging property.

In September, an 8-year-old boy assaulted a teacher, cursed at her and a school resource officer, and threw desks and chairs around a classroom after he refused to follow instructions about returning an iPad. The boy’s mother told school officials she would try to get there but had no ride. After an hour, she still had not arrived, and the child was referred to Rowan County Juvenile Services.

On Tuesday, two teachers were assaulted by a student. On Wednesday, another 8-year-old boy lashed out at a teacher in a “rage” and deputies were called in, according to a Sheriff’s Office report. Deputies have been called to the school four times since Aug. 27 for incidents involving that 8-year-old, said Chief Deputy David Ramsey.

“There were other incidents involving this child that law enforcement were not called to,” Ramsey said.

He cited an Oct. 10 report that says a deputy was called to the school for this student. The report noted the school had a problem with him the day before, but law officers were not called. In August and September, the boy assaulted a staff member, according to the report. He began shouting and throwing objects in a classroom. In one incident, staff members were able to calm the boy by talking to him.

In one incident, the boy shouted at, shoved and kicked an instructor.

The boy was taken to what is referred to in law enforcement reports as the “cool-down room.” A photo of that room provided to the Post shows an empty room with plywood covering the walls where students have kicked holes in them.

Once in the cool-down room, the student displayed the same behavior, which included slapping, pinching and spitting.

In the Tuesday incident, the same student assaulted a school staff member. The student was in a rage when a deputy arrived, the Sheriff’s Office report said.

The deputy wrote in the report that he witnessed the child scratch and open-hand slap another deputy multiple times during a struggle to get the boy to the cool-down room. A deputy went into the room with the child so he would not injure himself. While in the room, the student scratched, punched, kicked and tried to bite the deputy, according to the deputy’s report.

The deputy eventually decided to leave, fearing the child would be more likely to injure himself with the deputy in the room, the report said.

The student was taken to Novant Health Rowan Medical Center by an Emergency Medical Services crew for a mental evaluation. The mother of the boy was contacted and was “very verbally abusive to school staff and blamed them for her son’s behavior,” according to the report.

Sheriff Auten said discipline problems are handled by the school and deputies handle any criminal enforcement, but the situation at the school has escalated.

He said it’s gone from behavior problems that disrupt the school day to teachers and officers getting assaulted. Auten said it’s different dealing with elementary students versus adults, who can be arrested and removed from the premises.

“The system is not designed or set up to deal with these issues that we are seeing,” Auten said.

Deputies have to leave their patrol zones when called to a school, leaving that zone unattended, Auten said.

He added sometimes East Spencer and Spencer police officers have responded to the school.

“But it pulls them from the other things we’re doing because we don’t have full-time resource officers at elementary schools at this time,” Auten said.

He said he believes the school system is working to get grants for resource officers. Some off-duty deputies patrol the schools for limited hours a few times a week.

In some circumstances, “there are off-duty officers who work there who are familiar with the school, the staff, the students and the layout of the school,” said Capt. Tim Wyrick.

Auten said sometimes a principal will request that a deputy patrol a school, and the Sheriff’s Office tries its best to accommodate.

“We are very grateful for the excellent relationship with our local law enforcement agencies, and we are fortunate to have officers who are responsive to the needs of our students and staff,” said Rita Foil, spokeswoman for Rowan-Salisbury Schools.

“There is a special program housed at Hanford Dole Elementary that addresses students with social, emotional and behavioral challenges from across the district. Disruptive incidents do occur. There are situations when we will make non-emergency calls to law enforcement for assistance,” Foil said.