‘It was over’: Paul Lucas hopes son’s story will educate others 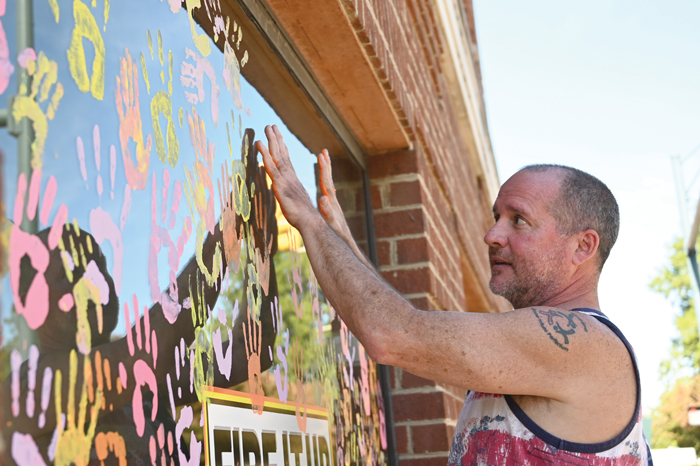 There was the repeated noise of one shoe hitting the ground and then silence as Paul walked with his son, Jordan, on April 28. Intoxicated and shoeless on one foot, Jordan walked home with his father. Jordan could hardly walk.

“You’re going to wind up homeless, in jail or dead,” Paul recalled telling his son.

Until April 28, Paul didn’t know his son used heroin. Previously planning to spend the night at a friend’s house, Jordan arrived home in a wrecked car owned by a friend of the Lucas family.

Two days later, Jordan entered a treatment program at Fellowship Hall, a facility in Greensboro. Four months after that incident, on Sept. 4, he was found face down and dead in his own house. Paul, who had planned to talk to his son about a two-year treatment program, said he found three syringes in his son’s house.

Paul acknowledges that his son made bad choices, but he blames the scourge of addiction for his son’s death.

“I never thought I’d do this stuff,” Paul recalled his son telling him while in treatment at Fellowship Hall. “The first time I tried heroin, it was over.”

If there were more adequate resources, Paul says, perhaps Jordan’s story would be different. Drug rehabilitation is important, Paul says, but more adequate education about the effects of drugs and addiction are what’s needed most. Paul says he hopes this year’s United Way campaign can make a difference in providing that.

Paul says he wants to tell Jordan’s story, hoping that it might make a difference for someone else.

“I’ll talk to West Rowan High School. I’ll talk to any youth group. People need to understand,” he said, as tears rolled down his cheeks. “I miss him terribly. His laugh. His smile. The way he played with his brother and sister.”

‘So many people die’

Jordan, born May 4, 1992, was a West Rowan High School graduate who worked at Frieghtliner in Cleveland before his death.

Family came first for Jordan, his father said. And in a family with smart folks, Paul said, Jordan likely had the highest IQ. He wasn’t much of an athlete, but he enjoyed watching sports.

When Jordan turned 16, Paul said he and his wife were excited.

“We were excited because he was going to be more social,” Paul said. “He was a shy kid.”

At 16, Paul said, Jordan smoked marijuana for the first time. Then, it was cocaine and prescription pills. And at 17, Paul said, his son spent time in juvenile jail because he couldn’t pass a drug test while on probation.

Paul said he worried about the so-called “West Rowan epidemic.”

“West Rowan has just had so many people die over the years from just stupid things,” he said. “Whether it was a car accident or whatever, we call it the West Rowan epidemic because so many kids, at least five or six kids, died.”

But when he got a job at Freightliner more than a year ago, Paul said, the family was excited. They felt like Jordan’s life was stabilizing. And Jordan seemed to find meaning and enjoyment in the job.

“He was doing relatively well for a while, and he was making good money,” he said.

But on that fateful day in April, reality came crashing in.

‘Understand where they are at’

Jordan spent May 1 to May 29 at Fellowship Hall, and Freightliner was instrumental in getting him into the program, said Paul, who spent a week there with his son.

While there with his son, Paul said, he watched a documentary — “Pleasure Unwoven: An Explanation of the Brain Disease of Addiction.” And that documentary changed his view about how his son and others are affected by drugs.

“Before I watched it, I would have seen someone on the streets of Salisbury and I would have judged them, but now I understand where they are at,” he said. “It explains why so many can’t stop even if they want to. … When an addict gets a surge of dopamine, it releases pleasure into the brain and that’s what drives them back to it.”

Jordan admitted to his father that he had started using heroin one year earlier. That, Jordan said, was when he felt like he had an addiction problem. He needed to use heroin to be able to function and go to work. Otherwise, he would be sick. If it meant being late or missing work entirely, he needed to use heroin to feel normal, Paul recalled his son saying.

He had started using prescription pills three years earlier — in 2016.

Jordan is one of the few dozen people who die from opioid deaths every year in Rowan County, with the latest data showing 36 such deaths in 2018.

Both are statistics the United Way hopes to address with its 2019 campaign and new community impact funding model. The model will fund community programs in the areas of substance abuse, mental health, healthy lifestyle behaviors and basic needs rather than the typical “shotgun” strategy of providing funding to the same agencies every year.

“We’re seeing first-hand increases in the needs funded by this campaign in a short period of time,” said Salisbury Fire Chief Bob Parnell, chairman of this year’s campaign.

With just three weeks left until the scheduled end of the campaign, the United Way is at 60.2% of its original goal of $1.525 million. That’s behind where the agency hoped to be at this point in the campaign. Parnell said he’s been pleased with the response from the community but that “we can’t let up now.”

Every two weeks, the United Way has updated its fundraising goal to reflect the latest calls to Emergency Medical Services for overdoses and suicides. That updated goal now sits at $1,526,231.

Parnell said he encourages any business that needs help kicking off a campaign to contact the United Way.

“If a company is interested in helping their community in a meaningful way, the United Way is the best way to do that,” Parnell said.