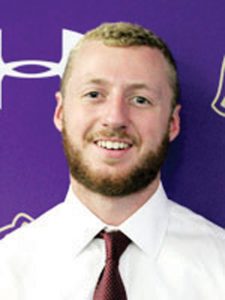 SEWANEE, Tenn. — He’s the smallest player on the Sewanee University football roster, but Wesley Porter, all 5-foot-7 and 155 pounds of him, continues to play big on football fields.

Porter, an East Rowan graduate, is now a junior at Sewanee, in central Tennessee. He leads the Division III Southern Athletic Association in solo tackles (41) and interceptions (4).

While he’s been good at football since he was 5 years old, adjusting to academic life at Sewanee, also known as the University of the South, has provided the fiercest challenge of his life.

“I was writing a paper in the airport on Friday before we played our game in Texas on Saturday,” Porter said. “Since I got back from San Antonio, I’ve been in the library because I’ve got an exam on Monday. Some days I’m in the library eight or nine hours.”

Porter was an honor student at East Rowan, but he’s attending a university with exceptionally high standards. A handful of Porter’s teammates are fellow North Carolinians, but very few of the athletes on Sewanee’s roster grew up in public schools. Most are from prep schools or private schools and academies where they were in small classes with lots of individual attention and were groomed from an early age for academic success.

“It was a culture shock for me when I got here,” Porter said. “I wasn’t as well-equipped as most of the students here are. They expect that you know an awful lot, and I had to catch up. That wasn’t a lot of fun. I know some people haven’t heard of Sewanee, I know a lot of people may not understand this, but it’s not much different than going to Harvard or Yale.”

He’s survived in the classroom. He’s made the adjustments in class and he’s made the time commitment outside of class. His major is international global studies. His future, once he has to say goodbye to football, is going to be in the business world.

As far as football, well, that’s never been much of a problem.

Porter created defensive havoc at East Rowan, where he was a holy terror. He was all-county three times and all-conference three times. He was frequently the smallest guy on the field, but he also was one of the fastest and smartest.

As a sophomore cornerback for the Mustangs, Porter intercepted four passes, pounced on three fumbles, blocked two punts and recovered three onside kicks. As a junior, there were four more interceptions, including a pick-six against Central Cabarrus, plus 579 yards on kick returns. As a senior, he accounted for five touchdowns, including a game-deciding pick-six against Northwest Cabarrus. While he was primarily a defensive player as a senior, he still accounted for 822 yards as a rusher, receiver and returner.

Porter had never heard of Sewanee, but a Sewanee coach watched his film, couldn’t believe his eyes, and traveled six hours to East Rowan to recruit him.

When he made the trip to visit Sewanee, Porter was blown away by an institution that had an educational tradition dating back to 1857 and a proud football tradition that goes back to 1891. Back in the 1890s, Sewanee was beating schools such as Tennessee, Georgia and Texas.

He knew he’d have to prove himself all over again to new coaches and new teammates at Sewanee, but that didn’t take long.

“By the end of camp before my freshman season, I was a starting cornerback,” Porter said. “They could see I was the real deal, that I wasn’t playing around.”

Opponents tested him as a freshman. He intercepted five passes and had 11 breakups. He was in on 51 tackles.

As a sophomore, they tested him less. He had two interceptions, 10 breakups and 56 tackles.

This season, he returned to his cornerback post, but the winless Tigers shifted him a couple of games ago to free safety.

“The idea was that at free safety I’d be able to make more tackles,” Porter said. “At corner, my tackles were coming from chasing guys across the field. At free safety, they’re coming to me a lot more, coming right at me down the middle.”

His four interceptions this season have raised his career total to 11.

Back in September, the Tennessee Sports Writers Association named him the state player of the week, even though he plays at the D-III level for a team that lost to Birmingham Southern, 49-30. He had two interceptions in that one. One was a drive-stopper. The second one he returned 58 yards for a touchdown. With a football in his hands, he’s still mighty elusive.

Sewanee managed to win three games last season, two of them in the conference. That was considered a good season. But this year, the Tigers are 0-8, and Saturday’s 51-12 road loss was typical.

The losing hasn’t worn down Porter’s enthusiasm for football.

“You’ll always get my best — I’ll play to the best of my ability whether we’re 0-8 or 8-0,” Porter said. “My effort, my will to win, those things will never change. I get pretty banged up a lot, but I’ve never been injured so badly I couldn’t play in the next game.”

The clock is ticking on his football career. He can hear it. Next year will be it.

If you could put Porter’s heart in a 6-2, 200-pound body, you would have an NFL draft pick, but he realizes he’ll be a businessman in a few years. A businessman with a degree from the University of the South.

“I’ve made so many great connections here,” Porter said. “There’s a widespread community of Sewanee graduates. They know what a degree from this university means. They know you’re going to be well-educated, well-rounded and disciplined.”