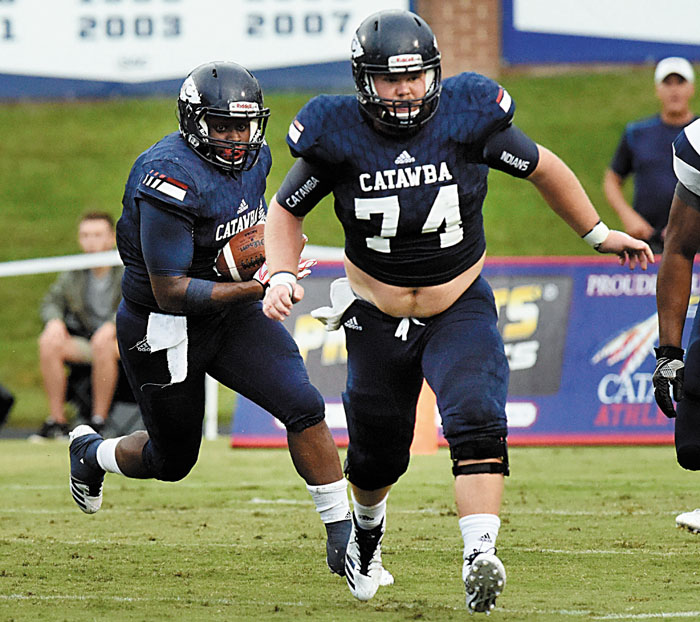 SALISBURY — He’s not quite as famous, but Catawba center Zach Mayo has something in common with Cam Newton, Stephen Curry, Kevin Durant and Derek Jeter.

They’ve all been treated by orthopedic surgeon Dr. Robert Anderson, one of the nation’s top specialists when it comes to foot and ankle ailments.

Thanks to Anderson, who now is operating mostly with Green Bay Packers in his native Wisconsin, Mayo is back on the field for the Catawba Indians. He started at left guard most of this season, but he moved to center when Kevin Norton went down with an injury in the Newberry game on Oct. 19.

Mayo says sharing his name with a movie character — Zack Mayo is the main character in the iconic 1980s film “An Officer and a Gentleman”— is strictly a coincidence. But he has seen the movie, which was released 15 years before the 22-year-old Mayo was born.

Mayo weighs 280 pounds . He’s always been bigger and stronger than his peers. As a youngster, they called him “Bam-Bam,” due to his resemblance to the Flintstones character. The story goes that as a toddler, while still in diapers, Mayo was hauling dumbbells around the house.

Mayo grew up in the Mount Pleasant High locker room and on the football field. His step-father Scott Burleson was a coach.  Mayo served as a ball boy for many years on Friday nights for Mount Pleasant head coach Michael Johns.

His last two seasons of high school ball were in 2014 and 2015, Mount Pleasant had one of the best teams in the state in 2A, with Mayo as an anchor.  There was a chilly November night his junior season on which Mount Pleasant pounded North Rowan in a playoff game. Mayo impressed Brian Hinson, who was Catawba’s offensive line coach then, and Mayo became a recruiting priority for Catawba.

Catawba landed him. The D-I schools were seeking 6-foot-5 offensive linemen. Mayo stood 6-foot-2. It also helped that Catawba was 40 minutes away from Mount Pleasant, close enough that Mayo could easily get home for family gatherings or to watch the MP Tigers.

Mayo redshirted the 2016 season at Catawba.

In 2017, as a redshirt freshman, he became an important component on the Indians’ offensive line. He was smart and versatile, able to play guard or center. He started games at both positions.

“I couldn’t have been more excited,” Mayo said. “That was the year the team went 9-2 and I had a really good season.”

Mayo’s future couldn’t have looked much brighter, but then disaster struck.

“I was working out that off-season, doing some running because I didn’t want to be out of shape when spring ball started,” Mayo said. “I woke up with my foot feeling like it was on fire. I couldn’t walk.”

An MRI revealed ligament and tendon issues and a broken bone.

Mayo missed spring ball in 2018, but rest seemed to be all he needed. He was healing. He felt great and was gearing up for he 2018 season. He was being counted on as a starter. He was running at Mount Pleasant when he felt that sharp pain in his foot again.

He would miss the entire season. There was some concern that he wouldn’t play again.

“That was hard, sitting out and watching the team have all those ups and downs, and not being able to help,” Mayo said.

John Lavender, Catawba’s associate athletic director for  sports medicine, is a friend of Dr. Anderson from Anderson’s days in Charlotte, when he worked with the Carolina Panthers.

“I was lucky that our trainer knew Dr. Anderson,” Mayo said. “Surgery was recommended, and that surgery went well. I was able to start getting back into things, and  now I’m finally back on the field.”

Mayo opened this season as the starter at left guard. The injury to Norton, one of his closest friends, forced him back to center mid-game against Newberry.

“I hated it for Kevin, but making the move back to center wasn’t a hard transition for me,” Mayo said. “Coach (Nygel) Pearson, our 0-line coach, prepares us for possibilities like that. We have a lot of mental quizzes about the basics for the other positions on the offensive line, just to make sure we’re all on the same page. We know what everyone else’s job is, in addition to our own. And I’ve been getting a few practice reps at center all along. When Kevin had a lab to go to, I was the center.”

Norton, a senior is out for the season, so Mayo, assuming he can stay in one piece, will be the center for Catawba’s last three games, including Saturday afternoon’s road game at Tusculum.

With a standard redshirt season behind him, plus the season he missed for medical reasons, Mayo has plenty of playing eligibility left at Catawba, but he’s made the decision that this will be his final season. He’s a stellar student with a 3.4 GPA and will be graduating on schedule.

He’s a P.E. major with a concentration on education and is ready to start his teaching and coaching  career in the high school ranks. He’s already had an internship, learning from coach Joe Nixon at West Rowan. He’ll be doing student teaching prior to graduation at Hickory Ridge High in Harrisburg.

His hope is to land a teaching/coaching job close to home. With another new Cabarrus school — West Cabarrus — opening next fall, his chances have increased.

“My only regret is not being able to play last season,” Mayo said. “My experience as a Catawba football player has been great, but it’s the right time for me to get my career started.”

Catawba head coach Curtis Walker hates to lose Mayo, but he understands. The purpose of the college and the football program is to educate and prepare student-athletes for the real world. Mayo is ready for the next step.

“He’s been a nice addition for us this year,” Walker said. “He’s strong, he’s smart, he’s versatile, and he can change positions without missing a beat. We’d love to have him back next season, but he’s put himself in a great position to join the work force.”