School counselor struck by car, walks away with minor injuries 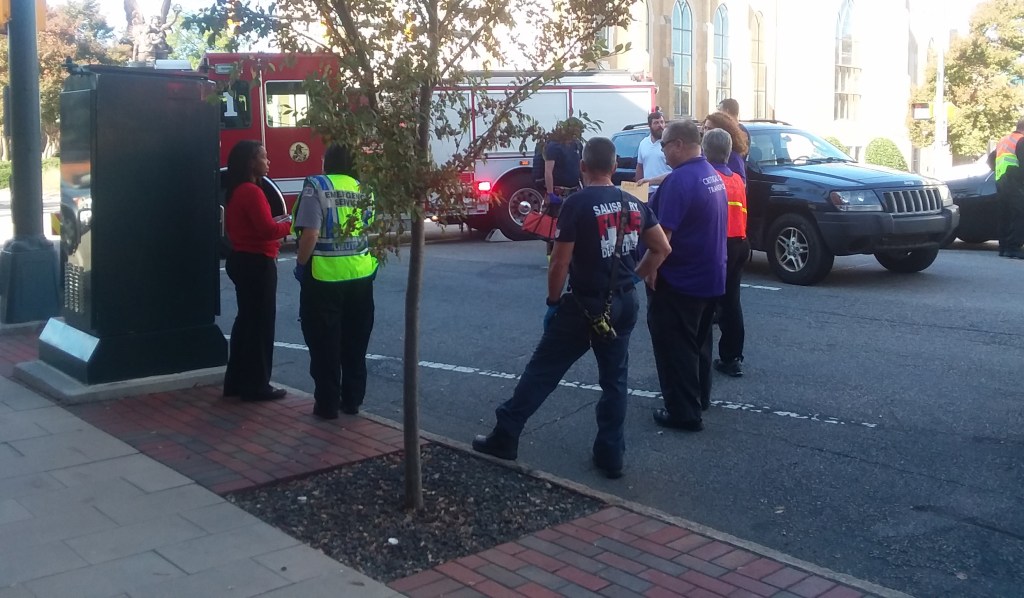 Janelya Lewis Baker, left, was struck by a Jeep Cherokee driven by Robert Wayland Houston at the interesection of West Innes and Church streets. She was swept off her feet, went over the hood of his vehicle and landed on the ground. She is seen standing at the scene, but later agreed to get checked out. Shavonne Walker/Salisbury Post

SALISBURY — Janelya Lewis Baker was able to walk away with minor injuries Monday afternoon after she was struck by a vehicle as she was crossing the road at West Innes and Church streets.

Baker, 33, a counselor with Rowan-Salisbury Schools, was calm after the accident as she described what happened just before 4 p.m. outside the Salisbury Post offices.

Baker said she had just left the United Way office in that building. She looked down at her phone for a message and waited for the light to signal so she could start crossing the street.

Houston told police the sun was in his eyes and he didn’t see Baker.

A witness said Baker was struck in the hip area, flipped over the hood of the sport utility vehicle and landed on her head and shoulder, then bounced back onto her bottom.

Beam said no charges will be filed.

Baker said she felt herself slide across the hood of the SUV. She was dazed and sat on the ground for a minute. Nurses from a transport unit with Novant Health Rowan Medical Center pulled over to check on her. The crew was heading back to the hospital when the nurses witnessed the crash. They bandaged Baker’s hand, which she scraped on the road.

The Salisbury Fire Department also responded and checked Baker as well. Baker declined to be taken by ambulance to the hospital, but after a period of talking with other school personnel who had rushed to the scene, she decided to go to an urgent care facility.

“She was floating on angels’ wings,” said a bystander.

Baker said she tried to turn her body to protect her head from hitting the ground, but witnesses said they believe her head did hit the ground. Baker complained of a sore shoulder and ankle pain.

When she called her husband to tell him she’d been hit by a car, he initially thought she had been driving.