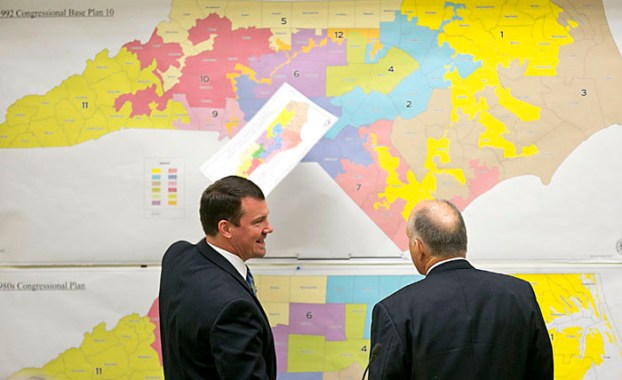 RALEIGH — Judges on Monday blocked North Carolina’s congressional map from being used in the 2020 elections, ruling that voters had a strong likelihood of winning a lawsuit that argued Republicans unlawfully manipulated district lines for partisan gain.

The panel of three Superior Court judges issued a preliminary injunction preventing elections under the district lines, starting with the March 3 primary.

The judges halted the use of these districts less than two months after they struck down state House and Senate districts. There they found extreme political manipulation of the lines similar to what voters suing over the congressional map also say occurred.

In the ruling Monday, the judges — Paul Ridgeway, Alma Hinton and Joseph Crosswhite — agreed that “there is a substantial likelihood that plaintiffs will prevail on the merits of this action by showing beyond a reasonable doubt that the 2016 congressional districts are extreme partisan gerrymanders” in violation of the state Constitution.

The judges gave no date by which a new map must be drawn but suggested lawmakers could redraw them on their own quickly to ensure congressional primaries be held as scheduled. The State Board of Elections has said lines needed to be finished by Dec. 15.

“The court respectfully urges the General Assembly to adopt an expeditious process,” the judges wrote.

Republican state legislators made plain when they drew that map that the lines were designed to help the GOP retain 10 of the state’s 13 congressional seats,but argued such strategies aren’t unlawful.

The judges’ ruling, which could be appealed, would likely lead to a map with more competitive districts for the November race — making it more difficult for national Republicans to retake control of the U.S. House. The lawsuit is being bankrolled by a national Democratic group led by former Attorney General Eric Holder.

Democratic and unaffiliated voters who sued Sept. 27 sought the injunction before any trial is held on their partisan gerrymandering claims. They said the case was extremely similar to a successful lawsuit over state legislative districts.

The same three judges hearing the congressional case ruled in that case just two months ago, finding Republicans manipulated those maps to ensure they could hold majorities in almost any political environment. Republicans were ordered to redraw those lines.

In the current congressional lawsuit, the plaintiffs’ attorneys convinced the judges that evidence already accumulated from separate federal litigation challenging the congressional lines shows they are likely to succeed in the state case.

The federal case went all the way to the U.S. Supreme Court, which decided 5-4 in June that federal courts would not get involved in partisan redistricting claims. But the justices left the door open for state courts to intervene.

Opponents of the current congressional map have latched on to the comment made by state Rep. David Lewis during the 2016 remapping. Lewis said at the time he was proposing a 10-3 map “because I do not believe it’s possible to draw a map with 11 Republicans and two Democrats.” Lewis said later he was joking.

Attorneys for Lewis and other Republican lawmakers who are defendants in the state congressional lawsuit case reject the plaintiffs’ partisan gerrymandering claims. They told the judges it was too late to make congressional map changes, since candidate filing begins in early December and that facts in the case were not settled. Changes now, the GOP’s lawyers said, would result in voter confusion and extremely low turnout should the primary have to be delayed.

Also Monday, the judges issued a separate ruling in the legislative case, upholding all the changes that the General Assembly made to several dozen state House and Senate districts. The plaintiffs who sued there had wanted a third-party expert to step in and rework 19 House districts.

The three-judge panel declined to meet the demands of Common Cause, the state Democratic Party and Democratic voters for a third-party expert to take over redrawing nearly 20 state House districts.

The decision means that, barring an appeal, the nearly 80 legislative districts the judges told lawmakers last month to redraw will be used in the 2020 elections. Candidate filing begins Dec. 2, with the primary set for March 3.

The districts’ final shapes will go a long way toward determining which party wins majorities in the November 2020 elections. Whichever wins will have the power in 2021 to draw the maps that will be used for the next decade based on new census population numbers.

The Democrats and Common Cause successfully challenged Republicans in their partisan gerrymandering lawsuit, prompting the remapping. But the judges disagreed with the plaintiffs’ complaints that the redrawing process wasn’t transparent, as the judges had ordered.

“The court is satisfied, despite the lapses identified by plaintiffs, that the efforts made by the General Assembly to ensure that the remedial process was conducted in public view were reasonable and complied with the court’s mandate,” Judges Ridgeway, Hinton and Crosswhite wrote in their order.

Common Cause didn’t immediately comment on the decision because lawyers were still reviewing the ruling, a spokesman said. In a news release, the top Republicans on the House Redistricting Committee praised the ruling.

Legislators had to redraw nearly half of the General Assembly districts because the judges declared that the House and Senate maps approved in 2017 violated the state constitution.

But the plaintiffs in the lawsuit that led to the Sept. 3 ruling still objected to 19 of the redrawn House districts covering 10 counties, saying they remained stained by partisanship and violations of the rules the judges directed GOP lawmakers to follow. They didn’t challenge any Senate districts, which received more bipartisan support in the chamber.

The judges said they were OK with how the legislators originated the House district changes from sets of maps a redistricting expert hired by the plaintiffs drew for the lawsuit trial this summer.

Republican lawmakers had contended the districts, picked at random from University of Michigan researcher Jowei Chen, complied with last month’s ruling because they are clearly nonpartisan and were given great weight in the judges’ ruling. Using Chen’s maps and the methodology to select the ultimate base districts were reasonable, the judges wrote.

The judges had ordered that the maps couldn’t be drawn using voting data or election results.

The plaintiffs alleged attorneys for the Republican defendants improperly emailed partisan data with House Redistricting Committee members about Chen’s base districts. While a “serious breach of this court’s mandate,” the judges wrote, the distribution appears inadvertent and the data weren’t widely reviewed.

In last month’s ruling, the judges declared GOP lawmakers fashioned boundaries to entrench the party’s majorities in both chambers, discriminating against Democrats by weakening their votes and denying their rights to participate in elections free from interference.

Initial reviews by redistricting experts of the maps approved by the General Assembly showed they were less skewed toward Republicans than the current plans but didn’t necessarily signal Democratic majorities were likely. Republicans took sole control of both chambers in 2011 for the first time in 140 years.