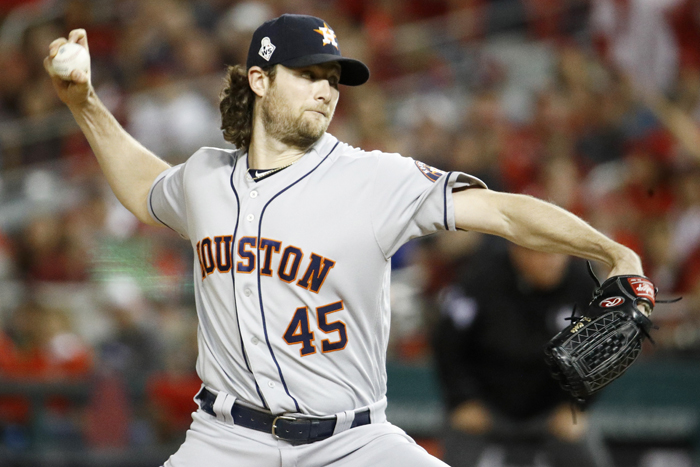 WASHINGTON — The Houston Astros handed the ball to Gerrit Cole, and he gave them a firm grip on the World Series.
Minus ailing ace Max Scherzer, the Nationals were no match in this Washington wipeout.
Cole looked exactly like the stud who dominated baseball most of this season, bouncing back from a Game 1 clunker to pitch the Astros to a 7-1 win Sunday night and a 3-2 lead.
“He knew what this game meant to this Series,” Astros manager AJ Hinch said. “So, nobody better to have on the mound.”
Slumping rookie Yordan Álvarez and Carlos Correa each hit an early two-run homer off emergency starter Joe Ross. George Springer added another postseason drive, and Houston won its third straight at Nationals Park.
What a turnaround, too — outscored 17-7 overall at Minute Maid Park, 107-win Houston hammered wild-card Washington 19-3 at Nationals Park.
“We actually hit some balls hard. We really did,” Washington manager Dave Martinez said. “We just can’t get nothing going these last three days.”
Scherzer beat Cole in the opener, and was the Nats’ best hope to slow Houston. But he was scratched just 3 1/2 hours before game time because of an irritated nerve near his neck, an injury that could finish him for the Series.
With the road team winning every time so far, Houston heads home with two chances to claim its second title in three years. Justin Verlander gets the first try when he starts against Stephen Strasburg in Game 6 on Tuesday night.
“High level of confidence,” Cole said.
Cole threw three-hit ball for seven innings, nicked only by Juan Soto’s home run in the seventh, and struck out nine — eight on breaking balls.
“I just thought that we needed to execute better pitches this time out, and I didn’t realize that that was how we got that many strikeouts,” Cole said. “I guess the situation just called for breaking balls in that spot. That’s what we were feeling.”
Cole’s mix of 99 mph heat and sharp secondary pitches induced a bevy of bad swings from the Nats as he improved to 4-1 with a 1.72 ERA this postseason. It might’ve been his final start for Houston — he’s eligible for free agency and figures to command a steep price.
Standing tall on the mound, Cole was unflappable in the face of 43,910 fans who went from fired up to furious to flat-out frustrated.
The crowd gave Ross a huge ovation when he walked onto the field for warmups, sympathetic to his situation — he had pitched a total of two innings in almost a month.
But when President Donald Trump was shown on the videoboard for about 10 seconds before the fourth inning, watching from a lower-level suite, the fans let loose with loud boos and broke into a brief but very audible chant of “Lock him up!”
The fans weren’t finished, either.
Cole ended his outing by getting Victor Robles on a called third strike, a pitch the TV zone showed to be off the plate. Robles chucked his bat, helmet and gloves, and the crowd soon began a derisive chant at umpire Lance Barksdale.
“I know there were some choice words but that’s just in the heat of the moment,” Martinez said.
Cole acknowledged he finished his outing “with a break.”
“It’s tough. I think ultimately some of those pitches were off the plate,” he said.
Most fans, meanwhile, stayed to the very end.
“They came to support us and really gave us everything they had all the way to the end, all 27 innings. Hats off to them. We apologize that we didn’t give them more to celebrate,” outfielder Adam Eaton said. “It wasn’t that we didn’t try.”
Cole led the majors in strikeouts this year, was second to Verlander in wins and topped the AL in ERA. He took a 19-game winning streak into the opener but hardly looked like an October star, giving up five runs over seven uneven innings.
In his second shot against the Nationals, he aced the test. His lone early wobble came when he dropped a return toss from catcher Martin Maldonado after a foul ball.
Cole escaped a first-and-third, no-out jam in the second, then breezed into the seventh.
Alvarez, normally Houston’s designated hitter, quickly justified his spot in left field. He launched a drive to left-center in the second.
Alvarez hit 27 home runs in 87 games this season, but hadn’t connected in 71 at-bats since Sept. 21.
Correa made it 4-0 with his homer in the fourth and Yuli Gurriel added a two-out RBI single in the eighth.
Springer’s 15th career postseason home run — seven in the World Series for the 2017 Series MVP — finished off the rout.

UP NEXT
Nationals: Strasburg is 4-0 with a 1.93 ERA this postseason. He won the wild-card game in relief, then won starts against the Dodgers, Cardinals and Astros. He outpitched Verlander in Game 2, giving up two runs in six innings. Strasburg led the NL with 18 victories this season.
Astros: Verlander is the only pitcher to start out 0-5 in the World Series after losing Game 2. He’s made six starts overall in the Fall Classic with a 5.73 ERA. Verlander went 21-6 this year and led the majors in wins, but is 1-3 with a 4.15 ERA in five postseason starts.
___
More AP MLB: https://apnews.com/MLB and https://twitter.com/AP_Sports