With Series suddenly locked up, Scherzer vs. Cole for Game 5 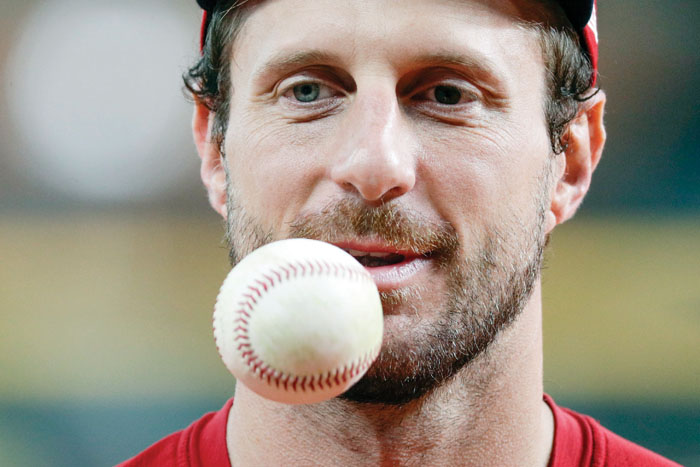 By HOWARD FENDRICH AP Sports Writer
WASHINGTON (AP) — Max Scherzer is a three-time Cy Young Award winner, Gerrit Cole is a top contender for this season’s AL honor, and their vaunted right arms could be responsible for whether Washington or Houston takes control of the World Series.
The Fall Classic heads into Sunday’s pivotal Game 5 all even at two games apiece after the Astros beat the Nationals 8-1 on Saturday night for their second victory in a row in Washington. It’s the fifth time the road team has won each of the first four World Series games.
The next starting pitching matchup is a rematch of Game 1 in Houston, grabbed by Washington 5-4 as Scherzer earned the win and Cole took the loss.
Which means Cole heads into this outing in an unfamiliar position.
“The focus on the pitches just continues to just raise across the board,” Cole said. “And so you have to deal with that. You have to respond to that.”
He had not taken an “L” since May, going 19-0 over his previous 25 starts.
This is a guy who led the majors in strikeouts and was second in wins during the regular season, going 20-5 with 326 Ks and a 2.50 ERA, and is expected to land a deal worth perhaps $200 million as a free agent.
On Sunday, he will face a Nationals offense that is slumping, with a grand total of two runs over the past two nights.
The way Cole described what happened in Game 1, when he allowed five runs in seven innings?
“I didn’t have my A-game,” Cole said then.
Scherzer navigated his way in and out of trouble that night, giving up two runs in five innings.
“After the first game, he already sat down and kind of mapped out his game plan for his next game,” Nationals manager Dave Martinez said. “So as you know: Max, he’s all in. He’s got a plan.”
One key to getting through that outing, Scherzer said, was not giving in to the Astros’ batters, and staying away from the strike zone as much as possible.
The 35-year-old right-hander was asked Saturday whether he might need to throw over the plate more this time around.
“The game will dictate that. The scoreboard will dictate that. You’ve got to just get into the flow of the game, and understand where everything’s at, where you’re at in the lineup, who’s up, score of the game, inning, pitch count. You name it,” he responded.
“That all just goes into the same thing,” Scherzer said. “You just have to have your instincts out there and work with the catcher and just figure out what you want to do.”
He had lost four consecutive postseason decisions coming into this year, dating to 2013 with the Detroit Tigers.
So far in 2019, the Nationals are 4-0 in his appearances, including three as a starter and one out of the bullpen. Scherzer has shown no ill effects from the upper back problem that put him on the injured list for about a month during the season.
Now, he noted, he’s fine.
“All those back issues, I have to really address in the offseason. … How I’m going to train and everything,” Scherzer said. “So I’ve been dreaming up different things I might be doing this December and January to really address that.”
That will all need to wait.
For the moment, his focus is on Game 5, and turning the World Series back in Washington’s favor.
___
More AP baseball: https://apnews.com/MLB and https://twitter.com/AP_Sports