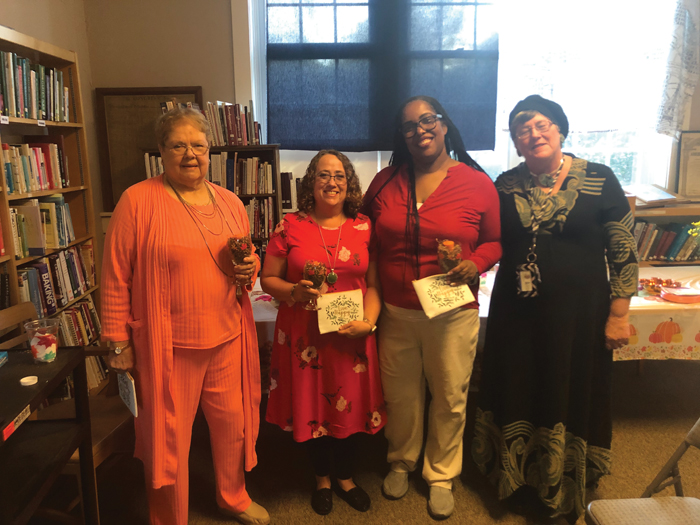 SPENCER — Happy murders, tire-patch cookies, white suits, true love and anti-slavery southerners — what connection do all of these ideas have? Three female authors from the Salisbury area shared about their recently published novels and autobiographies at Spencer Public Library on Oct. 17.

Leesa Hampton, a local principal, teacher and author of “Five Years,” an autobiographical memoir of true love, moved many to tears with her story. She told of how she thought that she had found the man of her dreams; however, five years into the relationship, discovered that he had hidden a secret life from her. Later, a crisis in this long term relationship and his health, caused Leesa to question the close spiritual friendship which they had enjoyed. She shared how this life-altering experience led to her being less selfish and more empathetic to the hurting world around her. “Grace is the word that describes my journey,” Leesa says.

After such a somber yet hopeful story, Jan McCanless — author of 16 books, former high school teacher and free-lance columnist for the Salisbury Post and Senior Savvy magazine — kept everyone laughing as she described her own family members who inspired the creation of “quirky characters” in her “cozy” murder mysteries.

Jan described the publishing process and its challenges. Once in the beginning of her writing career, an editor loved her murder mystery but suggested that she insert more sex, violence and profanity Jan refused, as this was not her style. Later she published this novel and her readers clamored for more. After 20 years, she has finished her 16th book.

Her titles include “Murder on the Mississippi,” “Murder in Mid-Air” and new releases “The Opera House Murders” and “Gold, Frankincense and Murrders.” Beryl’s Cove is the name of one of her murder mystery series.

Mrs. McCanless read aloud a portion of “The Opera House Murders” in which Brother Jerome, an unusual monk named Chip, finds himself involved in a murder which takes place in a retirement home for entertainers.

Last in our program,Tamara Mallimo, homeschool mom and Army Veteran’s wife, shared her passion for historical fiction. Growing up in the south, Tamara had heard tales of the Civil War days and afterwards, and had experienced the reality of racial prejudice in her own family. Inspired to write a series of novels set in the pre-Civil War south in which a family of influence abhorred the institution of slavery, she created her first novel, “Magnolia Landing.”

This was Tamara’s first book-signing as her novel was just published in September. One can anticipate interesting novels in her future as this series develops.
Spencer Public Library offered refreshments as people socialized with the authors. If anyone is interested in these authors and how to contact them, send an email to spencernclibrary@gmail.com for more information. Some of these authors’ books can be found on our shelves.

Our next event will be an Art Workshop on Nov. 18 at 4 p.m. Follow our Facebook page for more details. On Dec. 16, we will have a Country Christmas Comedy with Renea Henderson of Ashboro, featuring Bertie the Bag Lady and Carlene the Hillbilly. We hope to have some banjo or mandolin players at this event also.