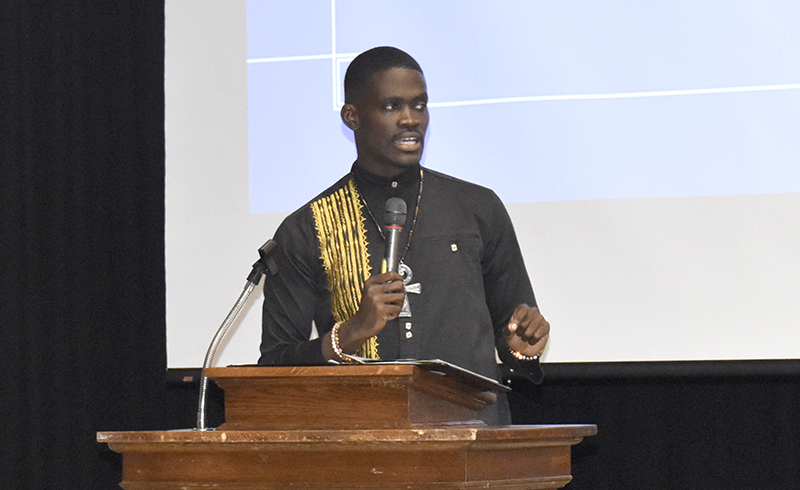 SALISBURY – In Kenya, there is a tribe known for its “lead warrior class.”

In the tribe’s interactions, warriors greet each other by asking, “Are the children well?” said James “Major” Woodall, president of the Georgia chapter of the National Association for the Advancement of Colored People and the keynote speaker at the 25th annual Freedom Fund Banquet in Salisbury on Saturday night.

With the theme of “Forward together and not one step back,” the Salisbury-Rowan branch of the NAACP hosted the banquet at the Salisbury Civic Center. Livingstone College Student Government Association President Anthony Bowman was the emcee.

Woodall is known as a public theologian and activist and is pursuing a master of divinity degree through Morehouse School of Religion. He is also a silver life member of the NAACP.

“Every opportunity among the Messiah Culture for acknowledgement is not begun by asking, ‘How are you doing?’ Yet, instead, they ask, ‘How are the children?’” Woodall said.

The question is both literal and figurative, said Woodall.

“You see, this story is moving as it illustrates a society that values its children so highly that a reminder of them is part of every interaction and then every greeting,” he said. “The fact that it surprises us illustrates how our very own culture is far from valuing our children in that very same way.”

Woodall said he joined the NAACP in 2014 while completing his undergraduate studies at Georgia Southern University.

“My very first memory from that year was watching the news and hearing three words that would go on to edge itself to the very walls of my memory,” he said.

Those were the words “I can’t breathe” spoken by Eric Garner, who died in 2014 while officers of the New York City Police Department held him in a chokehold.

“Somewhere I read that, ‘Let everything that has breath praise the Lord.’ But you see, unfortunately for too many people in our community, just like Brother Garner, they are being strangled to death by a nation that refuses to help them breathe,” Woodall said. “They can’t breathe because of suffocation and due to lack of access to health care. They can’t breathe due to polluted air and lead-contaminated water, and they can’t breathe due to being suffocated due to a poor education system.”

If we are truly honest, our children are not well, said Woodall.

“We must press on. The Jesus that I believe and I declare says, ‘Be not lukewarm and be not hot or cold,’ and to pick up my cross and your cross and follow him. And see, that is the history of the NAACP,” he said. “It is ‘faith in action,’ and that is costly and sometimes even deadly. We don’t become a quasi-Democratic Party or a quasi-Republican Party. We don’t believe that money will solve all of our problems, but only together we will win.

“We don’t just support what’s the current social trend or what is correct. We take a stand because when we breathe, when the world breathes and when our children breathe, it gives God glory.”

Woodall ended his speech in prayer.

In a call to action, Minister Justin Wade of Greater Fellowship Baptist Church highlighted a number of topics, including economic development, adversity and peaceful resistance. Wade made multiple references to the Bible as a message of encouragement to those in attendance.

“The lifeline of the community, which I would say is the black church, has lost her voice in an effort to make a profit from those who are already struggling,” he said. “We will overcome our adversity in our collective cooperation for effective advancement.”

Gemale Black, president for the Salisbury-Rowan NAACP, urged voters to turn out for the upcoming municipal elections. Black also spoke about how he aims to “pass the torch” to the next generation of community leaders in order to continue the work of the organization.

Black acknowledged a large number of people for their hard work in moving the mission of the NAACP forward and presented awards, including the Presidential Medal of Honor.

The award, which he called the most prestigious award of the night, went to Brooklynne Witherspoon. She is the creator of the A Bridge 4 Kids program, which began as a way to divert her sadness after her 7-year-old cousin, A’yanna Allen, was killed by a gunshot into her grandmother’s house. 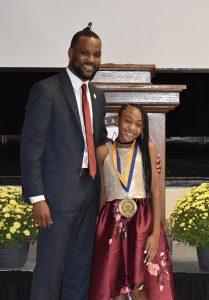 Witherspoon’s motto is to “work for a cause and not for applause” and “to live life in order to express and not to impress.”

Black said Witherspoon is “someone who focuses on the vision and mission of the Salisbury-Rowan NAACP and the community and as someone who really focuses on completing the work that needs to be done.”

She expressed gratitude to a number of guests, including the late Rev. Latasha Wilks, the first recipient of the Presidential Medal of Honor.

“We are a membership-based advocacy organization that fights to make democracy rightful in everyone, no matter what color you may be. We want the best for our community and will continue to fight for our community,” Black said.

Child killed in crash on NC 152