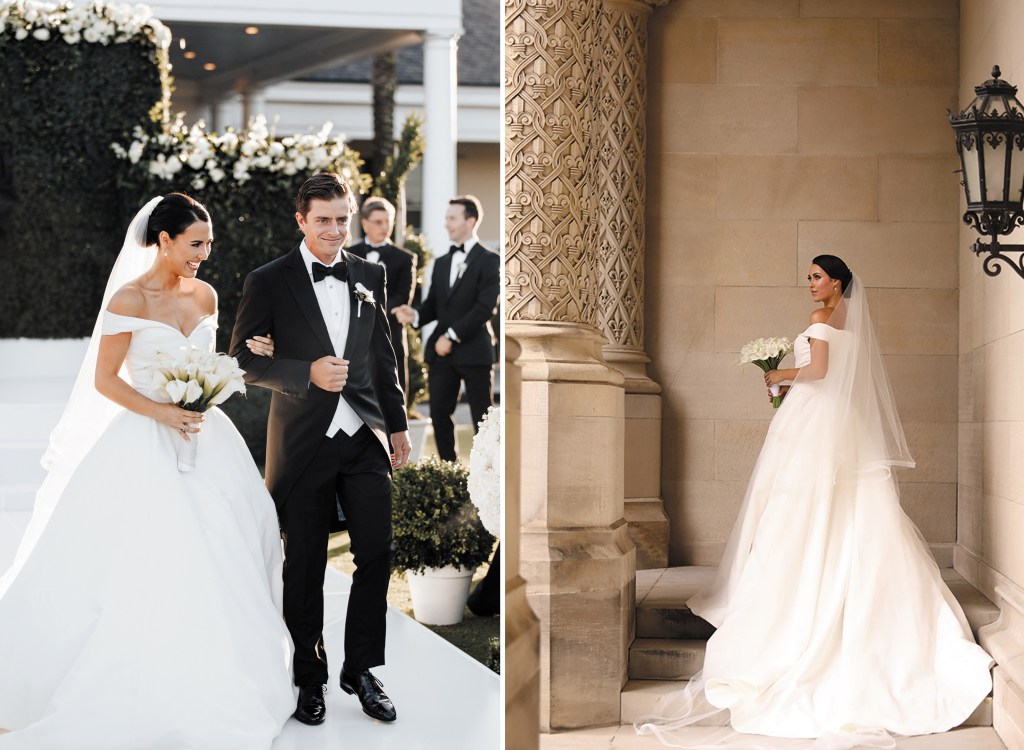 Elizabeth Scott Safrit and Charles William Bull were married Saturday, October 5, 2019, at Lake Nona Golf and Country Club. The Reverend Charles Littlejohn officiated the ceremony.
The bride is the daughter of Mr. Walter Miller Safrit II and Dr. Lynne Scott Safrit of Kannapolis. The groom is the son of Mr. Jeremy Miles Bull of London, England and Ms. Sandra Hawk Bull of London, England.
The ceremony took place outdoors on the veranda of the country club against the backdrop of a boxwood hedge wall draped with white roses and delphinium, with boxwood topiaries and garden urns filled with hydrangea and roses lining the aisle. Music was provided by Anthology String Quartet during the ceremony and Elite Show Band during the reception. Guests at the black tie event dined al-fresco surrounded by thousands of string lights overlooking the waters of Lake Nona and the 18th fairway of the golf course.
The groom’s parents hosted the rehearsal dinner in the dining room of the country club and a Sunday farewell party around the pool of the country club. On the evening of the rehearsal dinner, the bride wore a tea-length strapless dress made from her mother’s raw silk and Italian lace wedding gown.
All events of the weekend were planned by Lisa Stoner Events of Winter Park, Florida.
The bride arrived in a 1965 white Rolls Royce escorted by her father and carried a bouquet of mini calla lilies wrapped in a strip of raw silk from her mother’s wedding gown. The bride wore a custom silk mikado off-the-shoulder ball gown designed by New York-based designer Matthew Christopher. The gown featured signature seaming on the bodice and full skirt while one-hundred pearl buttons accented with Swarovski crystals adorned the gown from the top to the very bottom of the four-foot train. The bride wore a cathedral-length veil secured with a crystal and pearl comb.
Sewn on the inside of the bride’s wedding dress were pieces of lace from her mother’s wedding dress and the groom’s mother’s wedding dress, as well as a piece of material cut from the bowtie the bride’s father wore on his wedding day to her mother. The bride wore her mother’s sapphire and pearl earrings and a sapphire and diamond ring from Charles’ stepmother, Debbie Bull. As per family tradition on her father’s side, the bride wore a British silver six pence in her shoe.
The bride’s Maids of Honor were Miss Devin Gant, of Charlotte, North Carolina and Miss Pamela Peters, of Raleigh, North Carolina. The Men of Honor were Mr. Cyrus Frakes, of Columbia, South Carolina, and Mr. Cory King, of Greenville, South Carolina. The bridal attendants were Miss Andrea Hancock, of Kannapolis, North Carolina, Mrs. Alexandra Overcash, of Kannapolis, North Carolina, Mrs. Brooke Crossen, of Kannapolis, North Carolina, Mrs. Kristy Landers-Niedenfuer Violette of Sarasota, Florida, Mrs. Kelly Ann Lewis-Bortman, of Los Angeles, California, Miss Sarah Jane Waddell, of Port of Spain, Trinidad and Tobago, and Mrs. Katherine Bull, of Orlando, Florida. The bride’s junior attendant was her cousin, Diana Alfaro, of Raleigh, North Carolina.
The groom’s Best Men were his brother, Mr. Christopher Bull, of Orlando, Florida, and Mr. Findlay Ingram, of London, England. His groomsmen included brother of the bride, Mr. Wil Safrit, of Chapel Hill, North Carolina, brother of the bride, Mr. Walter Miller Safrit III, of Huntersville, North Carolina, Mr. Daniel Elmalem, of Orlando, Florida, Mr. Ryan Ruffels, of Windermere, Florida, Mr. Sean Roy of London, England, and Mr. Didier Merle, of Orlando, Florida.
The bride is the Director of Communications for luxury golf brand Clear Golf. Elizabeth is a 2010 graduate of A.L Brown High School. She received her Bachelor of Arts from the University of South Carolina and her Master of Public Relations and Corporate Communications from Georgetown University.
The groom is a professional golfer. Charles is a 2009 graduate of Bradfield College in Reading, England and received a Bachelor of Science degree from the University of Akron, where he studied as a collegiate athlete.
The couple will honeymoon in Dubai and the Maldives in January, upon completion of the groom’s golf season. The bride and groom reside in Lake Nona, Florida.