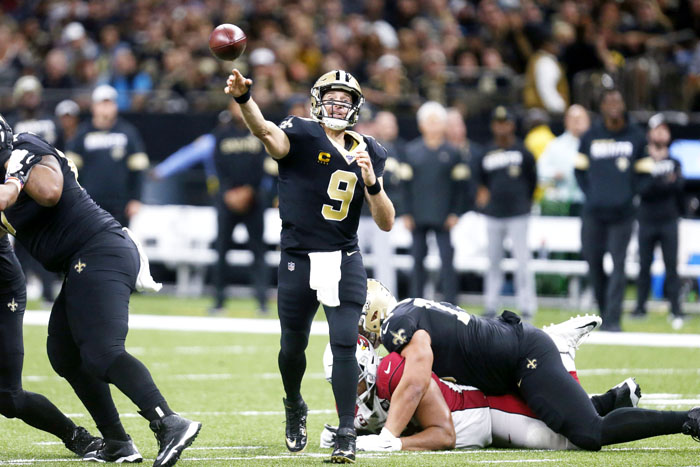 NEW ORLEANS — Drew Brees passed for 373 yards and three touchdowns in his first game in more than five weeks since thumb surgery, and the New Orleans Saints won their sixth straight with a 31-9 victory over the Arizona Cardinals on Sunday.
With few exceptions, Brees was accurate and looked composed even as his pass blocking collapsed, completing 34 of 43 passes.
He was intercepted once, by Patrick Peterson, but was not pressured before throwing that aggressive, risky pass down the left sideline, where fullback Zach Line was double-covered.
The Cardinals were unable to capitalize on that turnover early in the second half, however, and Brees made them pay by leading three touchdown drives after that, ending with passes to running back Latavius Murray, dynamic reserve QB and utility player Taysom Hill, and leading receiver Michael Thomas.
Cardinals rookie Kyler Murray completed 19 of 33 passes for 220 yards, but Arizona never found the end zone. Eight of his completions went to Christian Kirk for 79 yards in the receiver’s return from an ankle sprain. Arizona was held to 40 yards rushing and the Saints’ defense held a fifth-straight opponent below 260 total net yards.

CHARGERS 17, BEARS 16
CHICAGO — Chicago kicker Eddy Pineiro missed a 41-yard field goal as time expired and Los Angeles hung on for the win.
The Bears (3-4) took over at their 35 with 1:33 remaining and had a chance to win it after driving all the way to the 21. Chicago had quarterback Mitchell Trubisky take a knee with about 40 seconds left rather than try to get closer to the goal line. And Pineiro, who hit an upright on a miss earlier, hooked the potential winner wide left as time expired.
That allowed the Chargers (3-5) to snap a three-game losing streak and avoid their first 0-4 October since 2000, while the Bears dropped their third in a row. Los Angeles also picked up its first victory in seven road games all-time against Chicago and its first win at Soldier Field after losing four.
Philip Rivers threw an 11-yard touchdown to Austin Ekeler in the fourth quarter for the go-ahead touchdown with just over eight minutes left in the game after Melvin Ingram recovered a fumble by Trubisky in Chicago territory.
Rivers was 19 of 29 for 201 yards, a touchdown and an interception. Melvin Gordon ran for a score. Joey Bosa had two sacks, and the Chargers picked up their first victory since a win at Miami on Sept. 29.

TEXANS 27, RAIDERS 24
HOUSTON — Deshaun Watson threw for 279 yards and three touchdowns, including the go-ahead score in the fourth quarter to lift Houston to a win over Oakland.
There were about 6½ minutes left when Watson evaded the rush and connected with Darren Fells on a 9-yard scoring toss to put Houston up 27-24 for its first lead of the game. Watson appeared to get kicked in the face on the play and remained on the turf for a few minutes and was tended to be trainers before getting to his feet and walking to the medical tent. But he was OK and returned on the next possession.
Houston (5-3) forced a punt on the next drive when Gareon Conley, who was traded to the Texans from Oakland this week, knocked down a pass to Tyrell Williams on third down.
Fells had 58 yards receiving and two touchdowns and DeAndre Hopkins grabbed 11 catches for 109 yards.
Derek Carr had 285 yards passing with three touchdowns as the Raiders (3-4) lost for the second week in a row.

EAGLES 31, BILLS 13
ORCHARD PARK, N.Y. — Rookie Miles Sanders scored on a career-best 65-yard touchdown run and Philadelphia snapped a two-game skid with a win over Buffalo.
Carson Wentz finished 17 of 24 for 172 and a touchdown passing in a game the Eagles blew open by scoring TDs 83 seconds apart spanning halftime.
Dallas Goedert scored on a 5-yard catch. Jordan Howard had a team-best 96 yards rushing and scored on a 3-yard run, and Boston Scott scored on a 4-yard run after Sanders left the game with a shoulder injury in the third quarter.
Linebacker Brandon Graham had one of the team’s four sacks, and also forced and recovered quarterback Josh Allen’s fumble, which led to Goedert scoring the go-ahead touchdown.
The Eagles improved to 4-4 in bouncing back from a 37-10 prime-time dud of a loss at Dallas last week
The Bills (5-2) squandered an opportunity to open 6-1 for the first time since 1993 and failed to answer skeptics as to whether their hot start is a result of a soft schedule.

TITANS 27, BUCCANEERS 23
NASHVILLE, Tenn. — Ryan Tannehill threw an 8-yard touchdown pass to A.J. Brown with 6:55 left, and Tennessee rallied to beat Tampa Bay for its second straight win.
Tennessee came in with the NFL’s No. 4 scoring defense, having not allowed more than 20 points in a game all season. The Buccaneers entered with the league’s fourth-best offense, averaging 28.8 points a game, and they became the first to top the mark.
The Titans (4-4) led 14-3 after turning a pair of first-quarter turnovers into two TD passes by Tannehill.
The Bucs (2-6) lost their third straight and fourth in five games despite Jameis Winston and Mike Evans putting the Bucs up 23-17 by connecting on a TD pass at the end of the first half and a second early in the third quarter. They wouldn’t score again despite outgaining Tennessee 389-246.

PATRIOTS 27, BROWNS 13
FOXBOROUGH, Mass. — Tom Brady threw for 259 yards and two touchdown passes and Bill Belichick earned his 300th NFL coaching victory in the Patriots’ 27-13 win over the Cleveland.
Belichick sits behind only Don Shula (347) and George Halas (324) on the NFL’s all-time win list.
The Patriots improved to 8-0 for the third time in team history and the first time since 2015, when they started 10-0. The Browns (2-5) have lost three straight games.
Brady completed 20 of 36 passes, hitting Julian Edelman on eight of them for 78 yards and both TDs.
New England capitalized on three first-quarter turnovers by Cleveland to take a 17-0 lead. Running back Nick Chubb had back-to-back fumbles and quarterback Baker Mayfield had an interception.
Chubb ran for 131 yards, and Mayfield finished 20 of 31 for 194 yards and a touchdown

RAMS 24, BENGALS 10
LONDON — Wide receiver Cooper Kupp caught seven passes for a career-best 220 yards, Jared Goff threw for two touchdowns and Los Angeles beat winless Cincinnati to make for another successful trip to London.
Kupp caught a 65-yard touchdown pass in the second quarter on a double reverse flea-flicker from Goff, and the duo teamed up for a 40-yarder shortly after halftime to set up another score at Wembley Stadium.
Goff went 17 of 31 for 372 yards, 273 of which came in the first half. Kupp had 165 receiving yards by halftime and didn’t catch another pass in the final 27 minutes of the game.
It was a second straight win for the Rams (5-3) in London, where they blanked the Arizona Cardinals 33-0 on their previous visit in 2017.
Cincinnati fell to 0-8 for the first time since 2008 and looked no closer to finding a first win under first-year head coach Zac Taylor — a former assistant to Sean McVay with the Rams.

COLTS 15, BRONCOS 13
INDIANAPOLIS — Adam Vinatieri made a 51-yard field goal with 22 seconds left to help Indianapolis rally for a victory over Denver.
The NFL’s career scoring leader overcame two earlier misses to keep Indy (5-2) atop the AFC South with its third straight victory.
Denver (2-6) has lost two in a row.
The difference this time was the Broncos settled for two short field goals on time-consuming drives in the first half. Brandon McManus made a 21-yarder to cap a 17-play drive that consumed nearly eight minutes and a 29-yarder on their next possession when the Broncos burned nearly 5½ minutes in 13 plays to make it 6-0.

SEAHAWKS 27, FALCONS 20
ATLANTA — Russell Wilson threw two touchdown passes to DK Metcalf, Chris Carson ran for 90 yards and a score, and Seattle beat reeling Atlanta.
Seattle led 24-0 at halftime as the Falcons offense floundered early in their first start without quarterback Matt Ryan in 10 years. Ryan’s streak of 154 consecutive regular-season starts ended as he was held out with a sprained right ankle.
The Falcons (1-7) have lost six straight games, leaving coach Dan Quinn’s status a hot topic as the team enters its bye week. Team owner Arthur Blank said after the game he will “take the next couple of weeks” before reaching a decision on Quinn’s future.
Wilson completed first-half touchdown passes of 4 and 2 yards to Metcalf. Wilson completed 14 of 20 passes for 182 yards with no interceptions. The Seahawks won the turnover battle 3-0. Carson had a 1-yard scoring run.
Seattle (6-2) improved to 4-0 on the road.

JAGUARS 29, JETS 15
JACKSONVILLE, Fla. — Sam Darnold went from seeing ghosts to seeing teal.
Darnold was sacked a career-high eight times and threw three interceptions in Jacksonville’s 29-15 victory over New York.
He was picked off twice in the fourth quarter, including one that set up Gardner Minshew’s game-sealing score to DJ Chark with a little more than four minutes to play. Minshew completed 22 of 34 passes for 279 yards and three touchdowns. He scrambled for another 32 yards.
Minshew connected with Keelan Cole and Chris Conley for first-quarter touchdowns for the Jaguars (4-4).
Darnold was 21 of 30 for 218 yards with two touchdown passes to Ryan Griffin, and the three turnovers.
The Jets (1-6) managed 208 yards, with 93 of those coming on their opening drive.

LIONS 31, GIANTS 26
DETROIT — Matthew Stafford threw two of his three touchdown passes to Kenny Golladay and Detroit snapped a three-game losing streak with a victory over slumping New York.
The Lions (3-3-1) took a two-TD lead in the first quarter and Stafford’s 41-yard flea flicker to Golladay early in the fourth put them ahead by 12 points.
New York (2-6) turned the ball over on downs at the Lions 39 with 6:25 and at their 14 with 3:27 left, but it had another chance to come back.
Giants rookie Daniel Jones threw a 4-yard TD pass to Saquan Barkley and an extra point pulled them within five points late in the game. The ensuing onside kick went out of bounds, sealing Detroit’s victory.
___
More AP NFL: https://apnews.com/NFL and https://twitter.com/AP_NFL