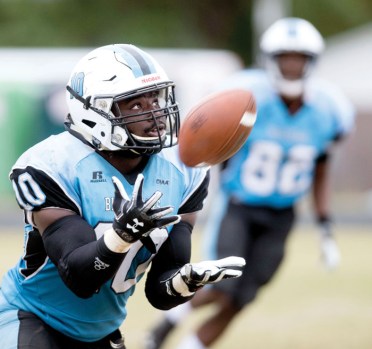 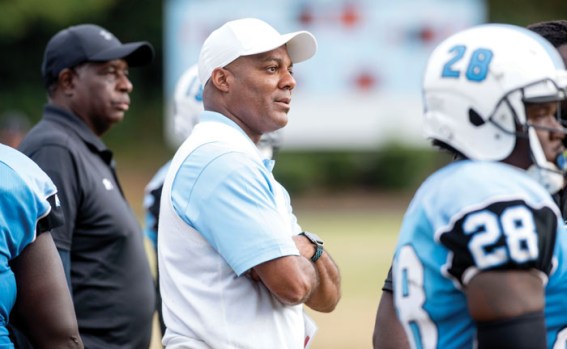 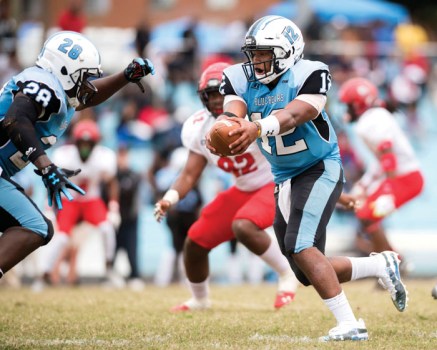 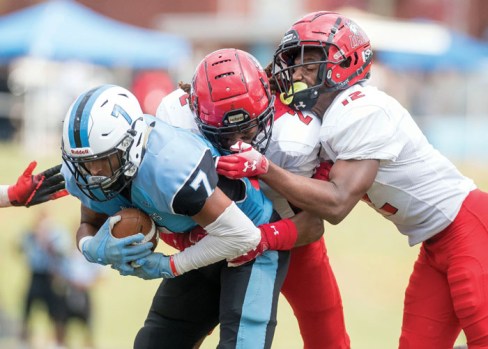 SALISBURY — It appears Livingstone’s football team has completed its early-season presentation, stepped down from the podium and taken a seat among the CIAA onlookers.

A season that began with high hopes — and a four-game winning streak — is spiraling into despair after Saturday’s 21-0 loss to visiting Winston-Salem State.

“Frustration,” quarterback Xavier Longerbeam said. “That’s definitely the word I would use. For three weeks, we’ve been right there, but the mood has changed from a 4-0 start to four straight losses.”

This one was a head-scratcher. One week after putting up some rec-league offensive numbers in a loss to Shaw University, the Blue Bears (1-4 CIAA) never plugged in against WSSU (4-4, 3-2). They turned the ball over four times in the second half, ran for a negative 26 yards and converted only three of 16 third-down chances.

“We couldn’t find a rhythm at all,” right tackle Garrett Hines said, shortly after Longerbeam and backup QB Miles Hayes were sacked four times. “A lot of the slants, a lot of the twists and blitzes were getting to us. The offensive line as a whole wasn’t giving (the quarterbacks) a solid pocket. They had to make more plays with their feet than we wanted them to.”

Livingstone’s first mistake came with 9:36 remaining in the first half. On third-and-short from the LC 45-yard line, Rams’ running back Quarderma Sloane took a pitch from quarterback Dominique Graves and was nearly stopped in the backfield by linebacker Ian Tyler. But Sloane broke the tackle, found a lane down the left sideline and rumbled into the end zone.

“I read the gap and shot it,” Tyler explained. “I got there, but just missed the tackle. That one’s on me.”

Tyler finished with 10 tackles for a Livingstone defense that deserved a better fate. It limited WSSU to 227 total yards, thwarted 14-of-17 third-down plays forced 11 punts. Yet it wasn’t enough.

“Because the OL didn’t execute,” said right guard Deonte Foxx. “We didn’t finish the game. When a call is called, we have to finish every down, every time.”

The guests cashed in on another mistake and extended their lead early in the second half. This time, WSSU advanced from its own 35 to the Livingstone 29, and faced a second-and-20 when defensive end Daventa Adams barged in uninvited for an apparent 8-yard sack. But a defensive holding call against the Blue Bears negated the play and gave the Rams new life. Three snaps later — on fourth-and-10 — Graves lofted a touchdown pass to Quincy Jackson for a 14-0 lead.

“It would have been a big sack,” said Tyler, “but we got a hold. Even though we played a solid game on defense, they capitalized on one of the few mistakes we made.”

“It’s just a blown opportunity,” Williams added. “I gotta get these guys to understand, when you have a chance to make a play, you’ve got to make it.”

LC’s last blown chance came on the first play of the final quarter. Hayes, the sophomore who started the season under center, telegraphed a pass that WSSU free safety Daryus Skinner intercepted and returned 66 yards for a touchdown. It proved to be soul-crushing.

“We took away the run, so they were trying to throw the ball a little more in the second half,” said Skinner, who earlier picked off an errant pass from Ryan Williams on a flea-flicker play. “It seemed like a desperation play. We executed it, they didn’t.”

“He was all-American last year,” Massey crowed. “People don’t throw in his vicinity. Most teams try to look him off and throw it somewhere else.”

Livingstone mounted its best drive of the game in the waning moments. With Longerbeam back at quarterback, the Blue Bears navigated 86 yards downfield — only to be foiled when freshman tailback Tyrell Baldwin was wrestled for a loss on fourth-and-goal from the 1-yard line.

“If we can find a leak or a crack in the protection, we’re on it,” Massey said. “We’re an aggressive defense. Aggressively smart.”

By game’s end, LC’s 4-0 start was a distant memory — and Williams was searching for answers.

“It’s very disappointing,” he said. “The offensive line did not protect like it has all year. We’re not helping ourselves with all these mistakes and blown opportunities. That’s what’s killing us.”

NOTES: Skinner’s interceptions were his fourth and fifth of the season. He had 11 in 2018. … WSSU has beaten Livingstone 17 straight times. The Blue Bears’ last victory in the series came in 1998. The two schools did not play in 2006-09, during WSSU’s brief stay in Division I. … Livingstone had 12 plays that produced negative yardage. … A total of 22 punts were launched. … LC celebrates homecoming next Saturday when Fayetteville State (6-2, 4-1) visits for a 1:30 p.m. kickoff.