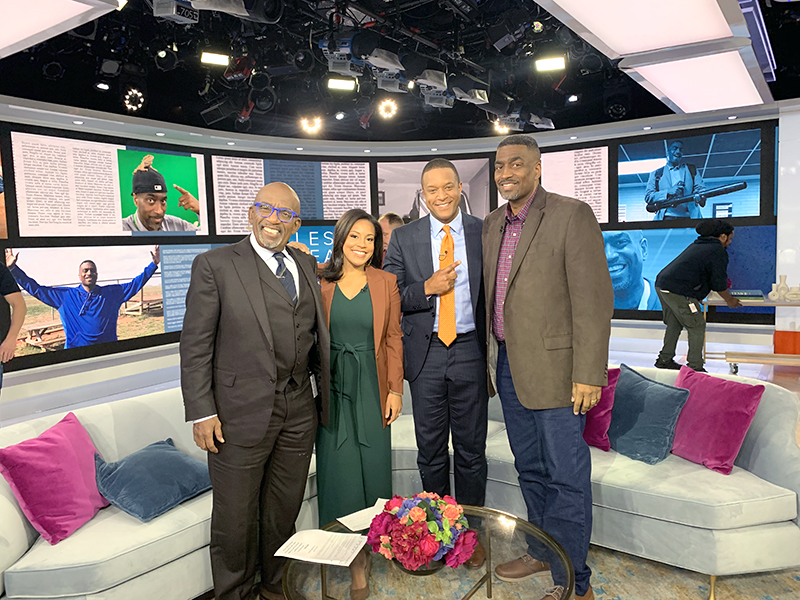 SALISBURY — Local educator Anthony Johnson initially thought an email asking inviting him to appear on the Today Show was an elaborate hoax by his fraternity brothers.

When he googled the name, he learned the sender was truly a producer for NBC Universal.

Johnson posted the opportunity on social media, and it wasn’t long before all the students knew about the upcoming show.

“The kids were talking about it in the halls days before,” Johnson says. “They all wanted to know when they were coming.”

Students are predictably impressed with the coverage.

“I thought it was pretty awesome they wanted to hear his story and come see what we do here,” said student Chase Shoaf.

“I’m pretty sure we’re the only school with a student media team,” said student Jordan Goodin. “It’s pretty cool they wanted to cover us.”

On Oct. 18, two NBC trucks were parked in the front circle when students arrived at school. Release forms were given to all the ninth and 10th graders as well as some upperclassmen. As minors, they needed parent approval to be seen in the segment.

A producer interviewed Johnson in the Creator Room A7, his lab at the school.

He shared his story of growing up in New Orleans, of not being challenged in the classroom, of failing in school and of dropping out at 16. Yet, at home, he built a barometer, took appliances apart and rebuilt them, programmed on a Commodore 64. After dropping out, he earned his GED and worked at minimum-wage jobs.

Johnson shared the tragedy of both his parents dying in a six-month span and his decision to re-examine his life. Johnson decided to become the teacher he never had, a teacher who would challenge his students to truly learn.

Specifically, Johnson failed fourth, seventh, eighth and ninth grades before dropping out. It was during his second shot at freshman year that he dropped out of school.

‘People from all over the world’

Johnson — an Apple distinguished educator, a TED innovative educator, a LEGO master Educator, defined STEM certified educator and former Teacher of the Year at the district and regional levels, was featured in an article on Ed Surge in July. That article began with a description of his own childhood school experience, and it caught the eye of the Today Show producer.

“It got a lot of traction,” Johnson says, “and people from all over the world called to understand what we’re doing.”

It’s significant that Johnson says, “we,” rather than, “I.” Johnson stands 6 feet 2 inches and, despite his accomplishments, remains quiet, humble and a little incredulous at how things have turned out. In one text message before the show, Johnson said, “I’m just glad NRHS will get some positive publicity.”

The show organized everything for his trip to New York City, Johnson said. They gave him choices of flights and sent him the confirmation for his tickets. When he arrived in New York, a car and driver were waiting to take him to a hotel just over a block away from the studio.

He arrived on Wednesday prior to the Thursday live show. He spent Wednesday evening walking New York, taking pictures with his high-end camera.

He laughed as he shared coming upon a model posing for a photographer on the Brooklyn Bridge late that night. Johnson noticed the photographer had the same camera as his. He took advantage of the moment and, leaping behind the photographer, shot a frame of the model with the cityscape behind her.

Waking up early Thursday morning, Johnson walked to a nearby Starbucks for breakfast. In the early morning darkness, the NBC plaza, empty the night before, was filled with people crowding outside the studio. He looked up and saw weatherman Al Roker through the second-floor window, filming his weather segment in front of a green screen.

It was then that things got real.

Johnson had makeup done beside actresses and rappers and waited in the green room for his moment.

Johnson said he was amazed at how down-to-earth hosts Al Roker, Sheinelle Jones and Craig Melvin are. They had 13 pages of notes about him, he said. So they were well-prepared to ask good questions.

“That’s why I wasn’t nervous,” he says. “I felt like they knew me. They were joking around, and really nice. I didn’t feel intimidated. Sheinelle walked by me and spoke to me before she changed clothes. Al Roker came up and shook my hand and told me just to relax. They joked around and I didn’t feel nervous at all.”

During commercial breaks, the hosts posed for photos with Johnson.

During the show’s feature on Johnson, it aired an interview from the school before talking with him. Jones shared that her mother is a teacher and asked what Johnson does with students with whom he can’t relate.

Johnson replied, “You’ve got to build a relationship first.”

Melvin asked Johnson about a friend who predicted he (Johnson) would one day be in just that seat on the Today Show. It was John Woody, a fellow Apple educator. Woody is a professor emeritus at James Madison University in Virginia.

Johnson laughed and acknowledged that, yes, Woody had, in fact, predicted this moment.

“I met Anthony in 2011,” Woody says. “I was doing a video for Apple on Apple Distinguished Educators and he had just been named as one. He was a little hesitant to be interviewed at first. I remember looking at him and telling him, ‘You’re gonna have the opportunity to tell your story one day.’

“I’ve done a lot of videos, but it was obvious when he told his story about the early years, it has tremendous impact. He’s such a nice guy, and he’s great in the classroom. I told him, ‘Your story is great, and you need to take advantage of that.’”

Roker referred to the ongoing series within the show, called, “Lessons Learned,” and asked Johnson what lesson he suggested the hosts take away from the interview.