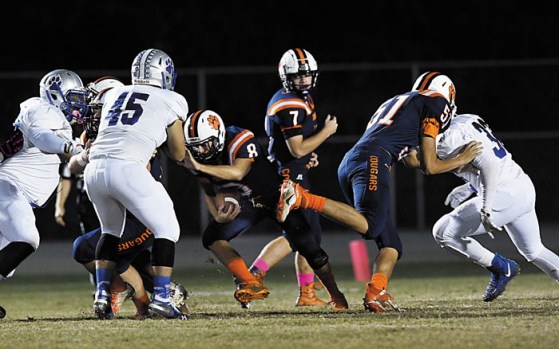 Carson's Hunter Courtney 8 behind the block of Zachary Deal 51. Statesvlle's Braxton Peters 45. photo by Wayne Hinshaw, for the Salisbury Post 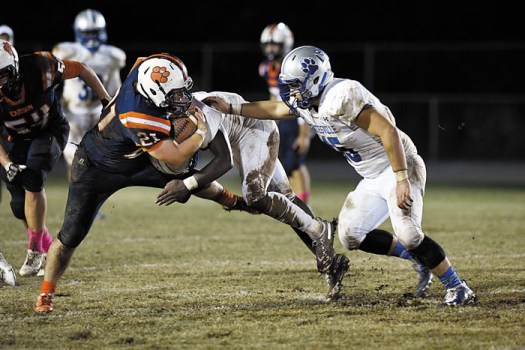 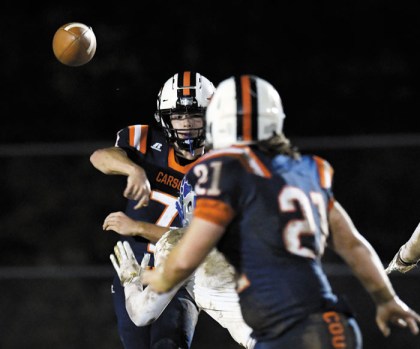 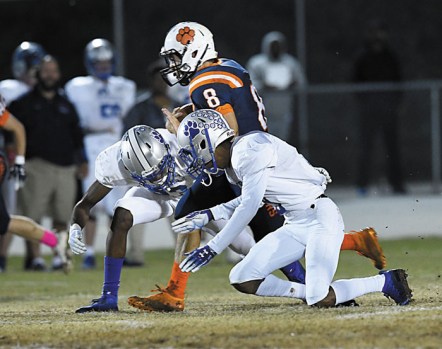 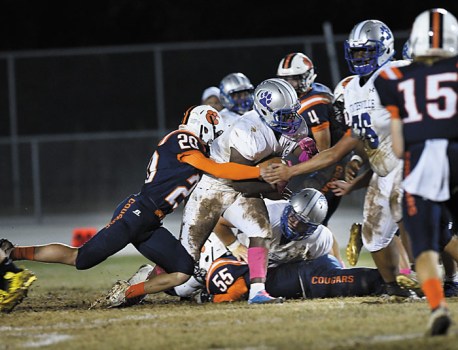 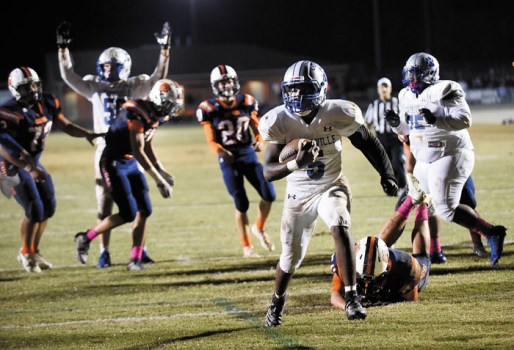 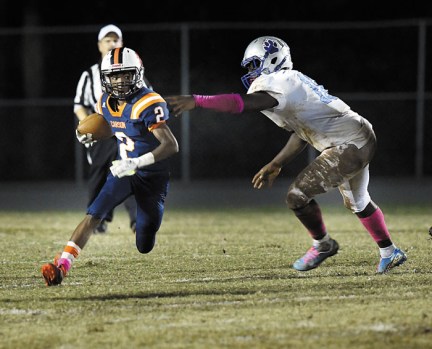 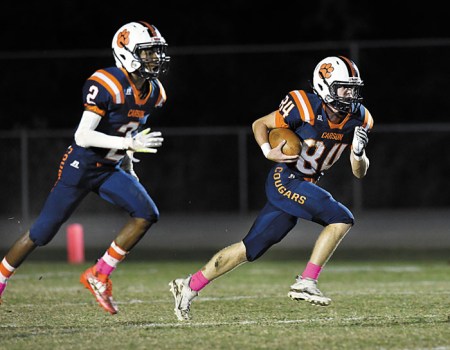 Carson's Zeb Burns 84 returns a kick off with AJ Merriman 2. photo by Wayne Hinshaw, for the Salisbury Post

Fourth-ranked Statesville and Carson played their North Piedmont Conference game in a muddy mess, but Imes, who had 309 rushing yards on only 13 carries in a 41-10 victory, looked like he was cruising on a race track. He was way faster than Carson’s defenders.

Imes is getting touches that normally would have gone to Smith, who was averaging 10 yards per carry when he went down with a knee injury in Statesville’s fifth game against Concord. Imes has done everything asked of him — and more.

“Imes is a senior, and he’s been really good for us for three years,” Statesville coach Randall Gusler said. “Great character, Great effort. Everything about him has been sensational.”

The Greyhounds (9-0, 3-0) will have extra work to do in the laundry room this week. Their crisp white uniforms were a muddy brown after 10 minutes, but they stayed undefeated.

Carson (2-7, 1-2) tried the same slow-it-down, bump-and-grind tactics that kept the Cougars in the game for a half at A.L Brown. The Cougars milked the play clock and smashed away doggedly on the ground, between the tackles. Carson got the ball first. Three first downs later, the Cougars had slowly, but surely, advanced from their 17 to the Statesville 40, while draining nearly six minutes off the clock.

“We were executing perfectly, doing exactly what we wanted to do,” Carson coach Daniel Crosby said.

But Carson had to be flawless to succeed, and when workhorse back Hunter Courtney was stuffed for a loss of 2 yards, that promising opening drive began to bog down. After Evan Johnston ran into a brick wall of white jerseys on fourth-and-3 at the Statesvile 33, the Greyhounds finally had their paws on the ball.

Carson’s defense surprised everyone with a quick stop and forced a punt. But it would be the last time the Greyhounds would punt all night.

“Field conditions were just unbelievable,” Gusler said. “That was part of the reason we started slow. Our guys had to feel out this field. They had to find their footing.”

It was still 0-0 when the first quarter ended  — a major win for Carson, a 35-point underdog.

“Statesville is tough and physical, but our offensive linemen were blocking great, playing their hearts out,” Courtney said. “Since we got that win against North Iredell (on Sept. 27), we’ve played good football.”

The first critical play arrived on Statesville’s second possession. The Greyhounds faced fourth-and-goal at the Carson 4. A stop would’ve been a gigantic lift for the Cougars, but Statesville put the ball in Imes’ hands. He looked hemmed in, but he spotted a cutback lane, squirmed to daylight and located the end zone. With 8:39 left in the second quarter, Statesville led 6-0.

Things started to slide off course for Carson after that.

Facing fourth-and-5 at their 35, the Cougars lined up like they were going for it, but it was an attempt to see if the Greyhounds, who already had jumped offsides once, would do so again. Statesville didn’t budge. Carson called timeout. After that timeout, Carson faked a punt. Statesville wasn’t fooled. Statesville had a short field, scored quickly through the air, and it was 13-0.

“I don’t regret going for it there because we were in this game to win it, not to try to keep it close,” Crosby said. “But if I had it to do over, we would have faked the punt to start with, rather than doing it after the timeout.”

Carson still had an excellent chance to get to the half down 13-0 — and still in it — but Gusler showed his experience. Even with Carson making a decent drive late in the half that pushed to midfield, he was using his timeouts, hoping to get the ball back with time on the clock before the half — and it happened. Carson fans were still cheering a nice, 39-yard punt that bounced to the Statesville 11, when Imes broke loose. He stormed for an 89-yard touchdown. That made it 19-0 at the break.

Statesville QB Debanye Moore lifted his arms in the universal gesture for a touchdown, as soon as Imes sprinted past Carson’s linemen. That was a backbreaker for the Cougars.

“We really needed to keep it a two-score game to stick with our plan,” Crosby said. “That long touchdown before the half , that hurt.”

By the end of the third quarter, it was 34-0. Carson couldn’t make consistent first downs, and once Statesville got the ball, there wasn’t much Carson could do. Moore can throw it, and he showed it.

Not that Carson’s effort ever wavered.

“They’ve got a lot of speed and we made a lot of mistakes,” said Carson defensive end Andrew Rollins, who had a fumble recovery. “But we never stopped fighting. I thought we fought hard.”

Carson’s fight was finally rewarded with points with 8:09 remaining. Andrew Beaver kicked a 40-yard field goal from the slop. That was remarkable execution of the snap-hold-kick aspect of football under the circumstances.

But Statesville’s answer was more Imes. This time he sped 91 yards for a 41-3 lead.

“We’ve played a lot of good teams this year,” Rollins said. “Statesville is in that top tier. They’ve got speed like Northwest Cabarrus.”

At the end, Carson managed to put a touchdown on the board against a mixture of muddy-shirted and clean-shirted defenders, who looked like they were playing for two different teams. Courtney powered for a first down to the 19. Alex London completed a pass to Brodie Johnson for first-and-goal at the 5.  Johnston bulled into the end zone with 53 seconds left.

Carson did finish strong, but the really strong finish is going to be when the Greyhounds and West Rowan Falcons collide in Mount Ulla on the last night of the regular season.

Carson will get an up-close look at West Rowan’s imposing size next week. That will be another uphill fight.

NOTES: Caden Hudson had an interception for Carson on a deflection. … Courtney fought for 85 fierce yards. Carson fans chanted his name after a 10-yard run, which says something about how tough Statesville’s defense is. … Carson tried everything with its running game — Courtney in a one-back set, Courtney behind Johnston in the I-formation, and some three-back sets with Courtney, Johnston and Alex Stirewalt, but Statesville’s defense was hard to move. … Crosby said Carson’s field took a beating from 2 inches of rain on Tuesday.