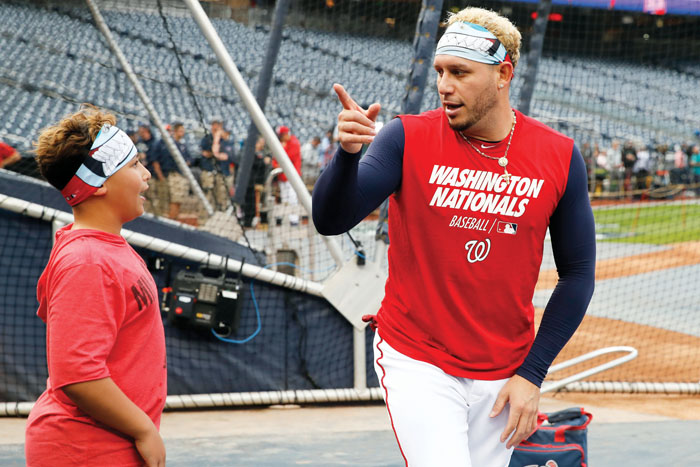 WASHINGTON (AP) — After Robinson Chirinos yanked a line drive off the foul pole in left field to give the Houston Astros a 4-1 lead in Game 3 of the World Series against the Washington Nationals, he huddled with his 12-year-old son, David, in the clubhouse.

“I came inside and he was waiting for me, like, ‘Give me a hug, nice job, good swing,’” Chirinos said. “Stuff like that, you can’t put into words. There’s some memories you’re going to remember forever. So I thank God and the Houston organization to allow me to do that.”

All season, Major League Baseball has urged clubs and fans to “Let the Kids Play.” On Friday night, the Nationals and Astros didn’t need the encouragement. There were enough youngsters with gloves during pregame warmups to fill out a Little League infield.

Owen Kendrick, the 10-year-old son of Nationals veteran Howie Kendrick, took grounders alongside the team at second base — one of his dad’s many positions. Owen and his 8-year-old brother Tyson also chased fly balls in the outfield.

“We do it all year,” Nationals pitching coach Paul Menhart said. But in the World Series?

“Why not? Why treat it any differently?” Menhart said. “We’re a family-oriented team. Family’s always welcome.”

Meyer playfully tossed his glove and hit Ross in the leg, and they both laughed.

Cabrera said his son flew in from Florida earlier Friday to be with him for his first World Series home game.

“That means a lot for me. He’s always with me, all the time, in the regular season,” Cabrera said.

The Nats are the oldest team in the majors, which means plenty of kids are old enough and slick enough to handle sharp grounders or towering fly balls.

Reliever Sean Doolittle, who so far is only a dad to two dogs, said the team showed it has its priorities straight when it backed bullpen mate Daniel Hudson’s decision to leave during the NLCS to be with his wife, who gave birth to their third daughter.

“I think we’ve been able to keep our identity and play the same way that we played all season long in the playoffs, and not every team is able to do that, but I think that’s one thing that’s helped us handle some of the pressure that comes with making a playoff run like this,” Doolittle said. “As the playoffs progress, there’s more and more stress. Your resting stress levels just increase, and for them to still be able to get some time with their families, I think that balance is really, really important.”

From a distance, David Chirinos looked almost like another player in the outfield in his blue team-issued sweatshirt. But he was the only one to raise his arms in triumph and high-five a player after a routine catch. On a home run, he ran back to the wall and pretended to leap and rob a long ball.

When batting practice ended, he ran off the field, beaming, with beads of sweat on his forehead as he descended the dugout steps.

The stakes of the night ahead didn’t matter — he was just a kid playing a game.

SUZUKI OUT OF NATS’ STARTING LINEUP FOR WORLD SERIES GAME 4

WASHINGTON (AP) — Nationals catcher Kurt Suzuki was out of the starting lineup for Game 4 of the World Series on Saturday night after injuring his right hip flexor.

Suzuki had not been expected to start with left-hander Patrick Corbin on the mound for Washington. Yan Gomes has been Corbin’s personal catcher all season. But Suzuki’s availability for the rest of the series is in question.

“He had an MRI this afternoon and I wait on the doctor to see what the results were,” Washington manager Dave Martinez said. “He says he feels OK. But until we see those results, we’ll know more after.”

Suzuki was pinch hit for in the sixth inning of Washington’s 4-1 loss to Houston on Friday, which pulled the Astros to 2-1 in the best-of-seven series.