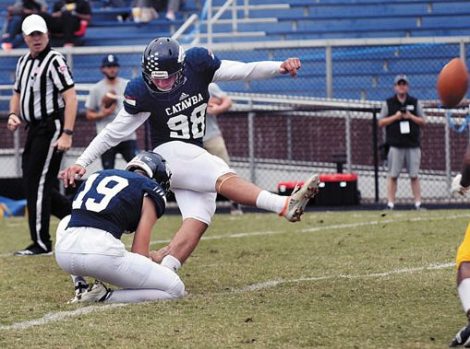 Catawba's Clayton Crile had the lone entry on the scoreboard for the indians, a 22-yard field goal in the second quarter. File photo by Wayne Hinshaw, for the Salisbury Post 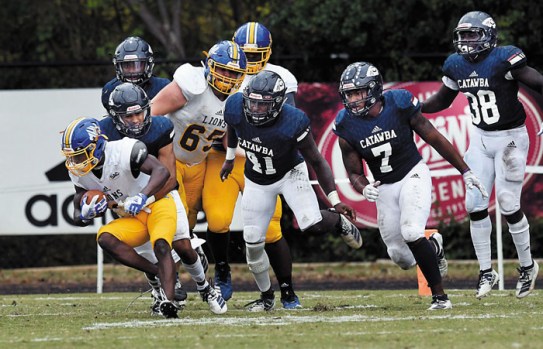 MH's Craig Rucker 2 slipping away to score a TD. photo by Wayne Hinshaw, for the Salisbury Post 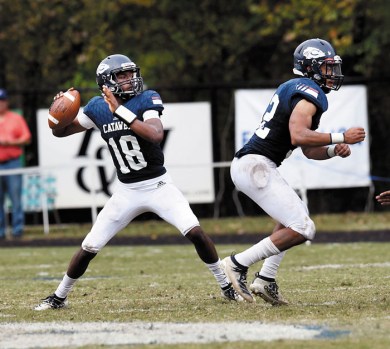 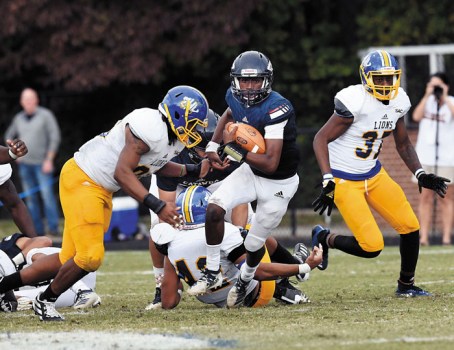 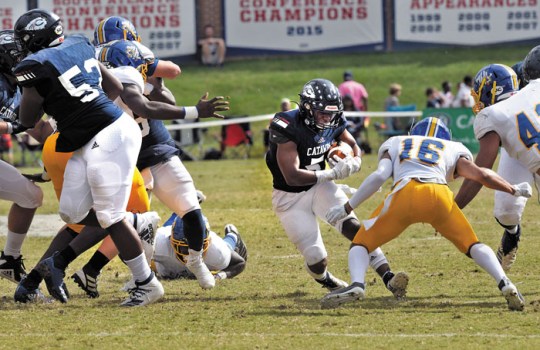 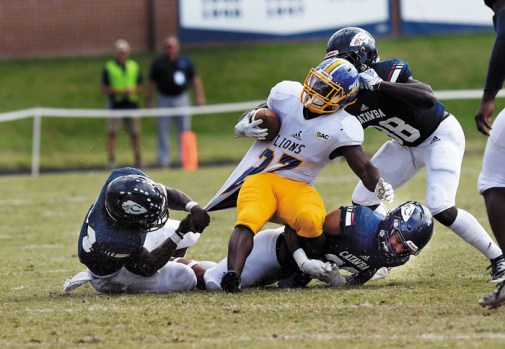 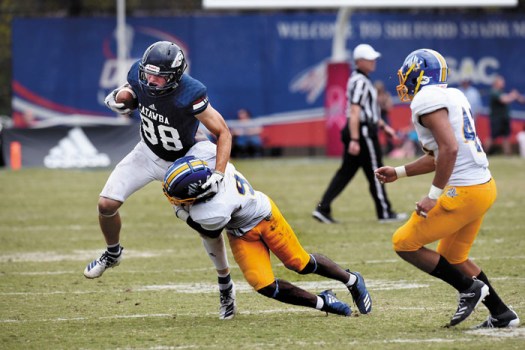 Catawba's Deland Thomas 88 being tackled by Carl Robertgeau 9. photo by Wayne Hinshaw, for the Salisbury Post 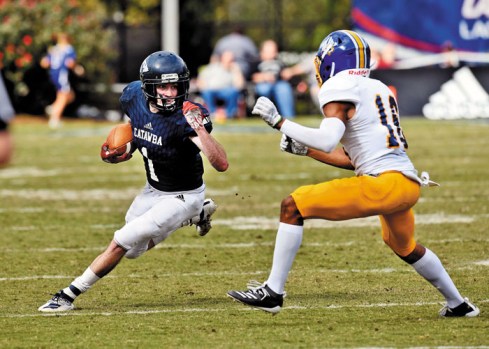 Rucker may be a candidate for South Atlantic Conference offensive player of the week and special teams player of the week after torching Catawba in the Lions’ 55-28 victory. Rucker had 166 punt return yards and 145 receiving yards. He had a game-changing punt-return TD, two receiving scores and a rushing touchdown.

“I think he’s the most explosive player in Division II,” Mars Hill head coach Tim Clifton said. “Any time the ball is in his hands, we’ve got a chance to score a touchdown. He not only can fly, he can make guys miss. Plus, he’s as competitive as anyone.”

Rucker (5-7, 175) came to Salisbury with impressive numbers that put him on the national leaderboard (58 receptions, 772 receiving yards, 8 TDs). He left town with bigger ones.

“Mars Hill came after Wade, blitzed him 90 percent of the time and tried to make him uneasy,” Catawba head coach Curtis Walker said. “For someone making his first start at this point in the season, he did a fine job.  Rose is a senior. We’ve got a lot of receivers injured, but he gave Wade an experienced guy to lean on.”

Catawba (1-7, 0-5) lost for the sixth straight time, but it had the homecoming crowd excited early.

Rucker had an electrifying 50-yard punt return that put the Lions in position to score first, but Catawba linebacker Jeremiah Ferguson forced a fumble on a completion over the middle at the Catawba 4-yard line. Freshman DB Izaiah Taylor recovered for the Indians.

Then Catawba drove 96 yards, grabbing a 7-0 lead when Wade hit Good, swinging out of the backfield, for a 27-yard touchdown.

Mars Hill responded with a 75-yard march that bridged the first and second quarters. On fourth-and-goal at the Catawba 1, Mars Hill put the ball in Rucker’s hands. He won a race to the edge for a touchdown.

Then Catawba’s offense went 3-and-out, Clayton Crile went into punt and Rucker dropped back deep as the return man. Crile boomed it. Rucker fielded the ball at his 16 — and then it was showtime.

“I was kind of surprised they were punting it to me again,” Rucker said. “Not many teams do that, but when they do, I try to take advantage. My goal was to score. Every time I get a chance, I want to score.”

He scored, effortlessly bobbing and weaving through Catawba defenders, patiently picking up blocks, scooting to the next open space. He went 84 yards. Some defenders missed him once. Some missed him twice. A lot of people had a shot somewhere along the way.  The bottom line was Mars Hill 14, Catawba 7.

What happened next was an ungodly spree by the Lions. Wade hit Rose for what looked like a serious gain, but Mars Hill DB Cameron Wrice simply wrestled the ball out of Rose’s arms, instead of tackling him.

On the next snap, Mars Hill QB Jimmy Urzua went deep, and 6-foot-5 Gilbert Johnson out-jumped Catawba’s 6-foot DB standout Cris Page for a 65-yard touchdown. That made it 21-7.

Less than a minute later, Wade never saw Mars Hill safety Carl Robertgeau, who intercepted him and romped for a 67-yard pick-six.

Then Good was injured when he was hit in the backfield, Wade was sacked on third-and-long, and Crile, doing his best to stay away from Rucker, punted out of bounds at the Mars Hill 40, as Rucker applauded.

After several rugged runs by bowling ball Elijah Jett, Urzua decided it was time go back to Rucker. He hit him over the middle. Rucker sprinted away from the Indians, and it was 35-7.

“That happens,” Clifton said. “I saw Carson-Newman do the same thing to Limestone. We got a little momentum. It snowballed.”

Walker was on the other end of that avalanche, getting buried by it, and it wasn’t much fun.

Catawba got a touchdown right before halftime when Wade, sprinting for his life to his right, hit Rose in the corner of the end zone to make it 35-14.

The teams exchanged punts to start the second half.

But then Urzua hit Rucker for the 73-yard score with 9:37 left in the third quarter that put Catawba down for the count.

“Usually, if I can make that first guy miss, it’s off to the races,” Rucker said.

Wade threw a 58-yard touchdown pass to Rose for 42-21, but the Lions ran the ball effectively (207 yards) and answered with rushing scores by Jett and Christopher Roberts.

Wade’s fourth TD pass of the afternoon — a short one to Burnam— ended the scoring with 8:08 remaining. Mars Hill was content to rest Urzua, Rucker and Jett and run the ball up the middle, rather than trying to break 60.

“We looked at this as a very dangerous game, but we played well and Catawba has an awful lot of injuries,” Clifton said. “We’ve been there. I know what Coach Walker is going through right now. If there’s anything good about injuries, it’s that young guys get to play and get experience. Catawba will be a handful next year.”

Catawba’s next two games are on the road at Tusculum and new SAC member UVA-Wise. The Indians will conclude the season on Nov. 16 at home against Lenoir-Rhyne on Hall of Fame weekend. That will be the 1,000th game in Catawba history.