JON C. LAKEY/SALISBURY POST Salisbury's Jaiwan Poole (2) runs the ball after a hand off from Vance Honeycutt. Salisbury Hornets defeated the visiting Golden Eagles of East Davidson on Thursday night with a score of 61-0. Salisbury,North Carolina,10/24/19. 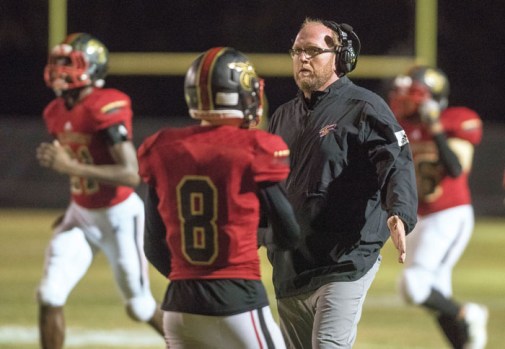 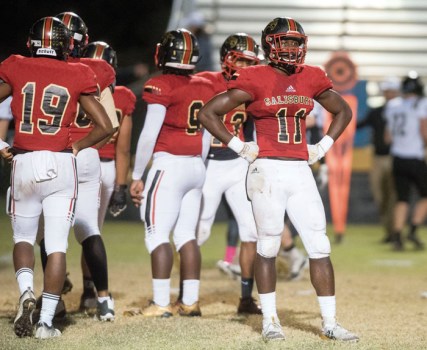 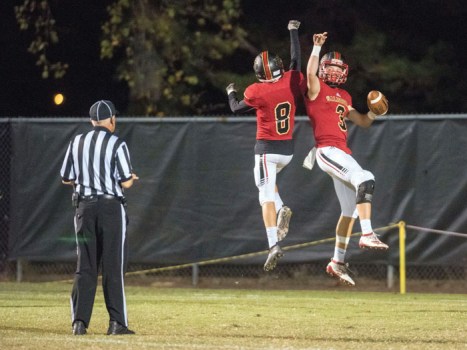 SALISBURY — Sometimes you just hit one out of the park.

Salisbury’s football team converted a few more non-believers Thursday night at Ludwig Stadium, where it scored on nine of its 13 possessions and rolled to a 61-0 Central Carolina Conference victory over East Davidson.

“Not to say anything negative about East Davidson, but this was a game we thought we should win,” winning coach Brian Hinson said, moments after the Hornets (8-1, 6-1 CCC) won their second straight. “Last week, our offense finally executed. This week, we eliminated mistakes we’ve been making all year. That was my challenge to them.”

East (1-8) fell to 1-6 in conference play. The Golden Eagles took only one snap in Salisbury territory — and SHS sophomore Jaden Gaither blew it up with a 50-yard interception return in the second quarter.

“Salisbury played a really good football game in all phases,” said East coach Vance Hanner. “We were hoping to catch them on an off-night, playing on a Thursday. But give the credit to Coach Hinson and the guys in the red jerseys.”

Those guys built a 15-0 lead before the game was five minutes old. On Salisbury’s first play from scrimmage, quarterback Vance Honeycutt lofted a 36-yard TD pass to Jalon Walker. On its third snap, running back Mike McLean took a handoff and scored on a 15-yard slingshot burst up the middle.

“The first play on offense, we called ‘vert,'” Hinson said. “I told the kids pre-game that we were gonna run it. I wanted us to start fast and finish fast.”

Salisbury did everything fast in the opening period, extending its lead to 28-0 on McLean’s 50-yard TD run and Honeycutt’s 36-yard scramble into the end zone. By halftime, the Hornets were threatening to run away and hide, taking a seven-touchdown lead with them.

“We just didn’t put our best foot forward,” Hanner said, after East was limited to three first downs and 57 total yards. “And Salisbury, they’re really rounding into shape for a nice playoff run. Hands down, they have the best defense in our conference — but that’s just my opinion.”

“That defense has been consistent all season,” said Hinson, a former Catawba offensive lineman. “What made me happy was how the offense came together.”

No one’s performance was more illuminating than Honeycutt’s. The 6-foot-2 junior was 5-for-7 passing for 124 yards — all in the first half — and ran for an additional 52 yards. He threw two touchdowns, both to Walker, and ran for another.

“The game is starting to slow down for Vance,” Hinson noted. “He is a smart kid. He made one bad decision and threw an interception, but you’ll take one bad play out of all the good ones he made. He helped us win.”

So did McLean and freshman running back JyMikaah Wells. McLean (4 carries, 86 yards), who spent the second half dressed down, surpassed 1,000 yards rushing and scored his ninth and 10th touchdowns. Wells — an eight-quarter player promoted from the junior varsity team — gained 177 yards on eight attempts. He scored on a 25-yard run in the second quarter and on a mind-boggling 79-yard sprint midway through the third. Salisbury’s final TD came on a 2-yard draw by 5-foot-2 senior Jaiwan Poole with 9:26 to play.

Less than a week after bumping off Ledford, Salisbury assumes sole possession of second place. Any threat of a possible letdown was squelched when East went three-and-out on each each of its first five possessions.

“You always hear about a trap door game after something like that,” said Hinson. “You’re right in-between Ledford and North Davidson, and you’ve got 15-, 16- and 17-year olds who might take someone like this lightly. But as soon as we got started, we were fine.”

NOTES: Salisbury visits North Davidson next Friday. … Sophomore Jayden Gibson had a third-quarter interception for the Hornets and teammate Dontaz Witherspoon recovered a fumble on the first play of the fourth period. Sophomore Reed Fugle spelled Honeycutt in the second half and did not throw a pass. … A running clock was initiated with East’s second-half kickoff. The Eagles netted only six yards in the third and fourth stanzas. 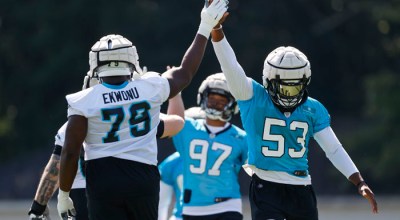