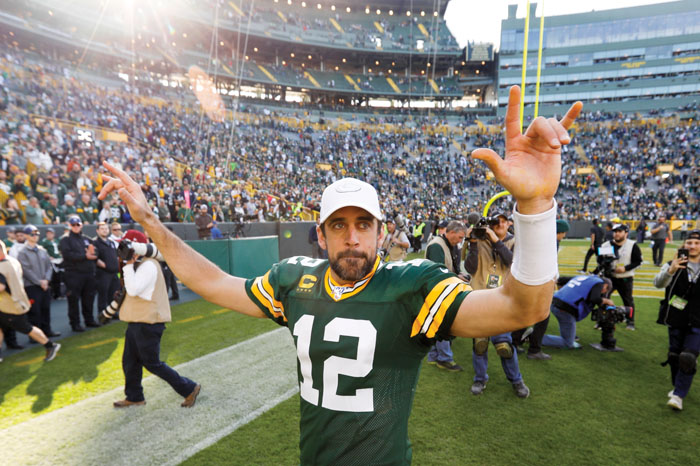 By DAVE SKRETTA AP Sports Writer
KANSAS CITY, Mo. (AP) — It was supposed to be a Sunday night celebration of two of the NFL’s storied franchises, the Green Bay Packers and Kansas City Chiefs, teams that played in the first Super Bowl and each led these days by transcendent quarterbacks.
That last part was thrown for a loop last week. Everything else remains the same.
The Packers (6-1), fresh off their blowout of the Raiders and with Aaron Rodgers seemingly hitting his stride, are still headed to Arrowhead Stadium for a showdown of division leaders. But his opposing quarterback will be journeyman Matt Moore — not Patrick Mahomes — after the league’s MVP dislocated his kneecap in the Chiefs’ road win over the Broncos.
“I love putting on the film and watching him and his arm angles and throwing ability and eye manipulation,” said Rodgers, who got to know Mahomes while they starred together in State Farm Insurance commercials. “He’s an extreme talent in the league and the league’s obviously better when he’s playing.”
The Chiefs (5-2) insisted that was a possibility until finally ruling him out Friday.
Mahomes couldn’t stand when he hurt his knee while sneaking for a first down in Denver. The kneecap was jerked back into place while he was still on the field, and he appeared to be walking better as he returned to the locker room. X-rays and an MRI exam showed no damage to any ligaments, and Mahomes spent the long weekend off with the training staff at the team’s facility.
When practice rolled around Wednesday, he was throwing passes alongside Moore in the portion open to reporters. But only the Chiefs knew for sure how much work he did the rest of the day, and it became clear by the end of the week that Mahomes would need at least one game off.
It’s not as if Moore doesn’t have experience in this precarious situation. He started dozens of games for Carolina and Miami, and he has plenty of experience preparing as a backup quarterback.
He was solid if unspectacular in the second half against Denver, and that may be all the Chiefs need him to be. He threw a long touchdown pass to Tyreek Hill, made no major mistakes and, perhaps most importantly, rallied the Chiefs around him when their best player limped off the field.
“Watching Pat, it’s easy to want to play like him, which I can’t,” Moore said. “You have to adapt to the offense, I think, and you have to adapt to the guys around you. Some things are being taught maybe different than you’ve had them in the past and so, yeah, we’re adapting every day.”
As the NFC North-leading Packers and AFC West-leading Chiefs prepare to meet, with much of the focus still on the quarterbacks, here are some other things to watch:
MORE MED CHECKS
The Chiefs also will be without defensive end Frank Clark because of a neck injury. Left tackle Eric Fisher (groin), left guard Andrew Wylie (ankle), defensive tackle Chris Jones (groin) and cornerback Kendall Fuller (thumb) also remain out. Wide receiver Sammy Watkins (hamstring) is expected to play.
TOE TROUBLE
On the other sideline, the Packers still hope wide receiver Davante Adams will return this week. He’s been out the past three weeks, sending Green Bay scrambling for reinforcements.
“I think it could go right up to game time, to be truthful,” Packers coach Matt LaFleur said. “I’m not quite sure where we’re at right there with him right now.”
GETTING DEFENSIVE
The Chiefs are coming off their best defensive performance of the season in Denver, holding the Broncos to just 205 yards. It came after a series of games in which Kansas City coughed up so many yards that new coordinator Steve Spagnuolo already was coming under fire.
“We’ve been making strides,” Chiefs safety Tyrann Mathieu said. “I thought the Thursday game we kind of put it all together, from the front end to the back end. Guys playing together. Guys trusting their teammates. It allowed us to have some fun.”
SPECIAL TEAMS
The Chiefs cut wide receiver DeAnthony Thomas, a mainstay on several special teams units, so they could promote rookie quarterback Kyle Shurmur from the practice squad. They needed the insurance in case Mahomes couldn’t play, but it came at the expense of a dependable punt returner.
HISTORIC CLUBS
Perhaps nobody has more appreciation for the Packers and Chiefs than Andy Reid, who cut his teeth as an assistant in Green Bay and is now the coach in Kansas City. Reid also spent many years as the coach in Philadelphia, which means he has worked for three of the NFL’s tradition-rich franchises.
“The Packers are right there, close to the beginning, then the Chiefs with the whole start of the AFL. I think it’s great,” Reid said. “There are not a lot of people still alive that remember all of that, that were there. But the history of it and the way it’s maintained is a tribute to the families and all the people who have run the two organizations.”
___
More AP NFL: https://apnews.com/NFL and https://twitter.com/AP_NFL