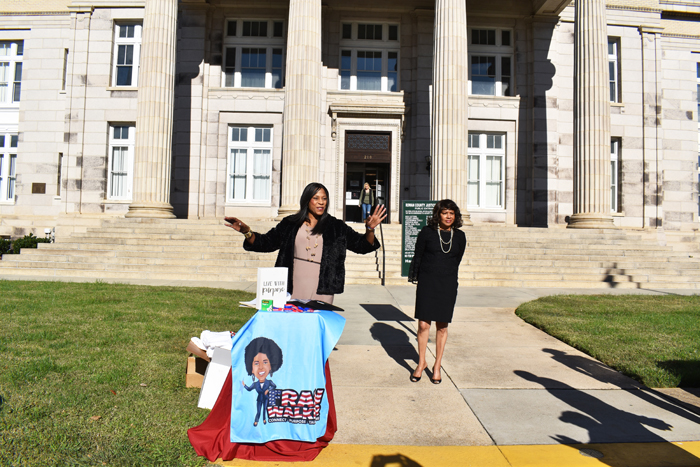 SALISBURY — Fran Walker says she is not traditional, and on Wednesday morning she entered the political arena for the first time, announcing her run for presidency outside the Rowan County Courthouse.

Walker, registered as an unaffiliated voter, said she decided to run for president because she often doesn’t see someone represent her along with the rest of the working class. She described herself as an African-American female living the American dream.

She is a divorced, single mother and a disabled veteran. She has worked in jobs from a realtor to modeling.

“If you look at the previous election candidates and look at it today and our president,” Walker said, “they are not representing the vast majority of the country. We are the working force. Nobody has the most connection to the working force than I do.”

Her experiences makes her qualified to run for president, she said.

“It is a journey,” Walker said. “It’s a dream. The American dream is still alive. I’m going to get it.”

Walker wants to be a listener and bring solutions to the country.

“With the debates and all that’s going on, we’re not hearing the heart of what is really happening,” Walker said. “We’re not hearing resolution. I’m not here to tell you all about the issue. I’m going to come up to the table with some solutions.”

Walker said she would be running as a Republican, though she doesn’t identify with either party.

“I don’t believe in a lot of things of the Democrat or the Republican,” she said. “It’s a lot of things they are discussing and to me I don’t see myself being represented.”

She said there is no neutral party that will represent what she believes in. She added that she hasn’t seen an African-American woman run on the Republican ticket.

But besides trying to take on an incumbent Republican president in Donald Trump, Walker will face some significant financial and logistical hurdles, including getting on the ballot. As an example, Walker said, she will need to raise $50,000 by Dec. 14.

She plans to meet with organizations locally, families and church groups. From there, she said, she will “spread her wings” and go outside Salisbury.

She said social media will be her main asset along with knocking on doors.

“Word of mouth has a strong streak behind it and with you and I and all of you standing here today, if you give me a chance and you give me an opportunity, I can promise you I can get something heard,” Walker said.