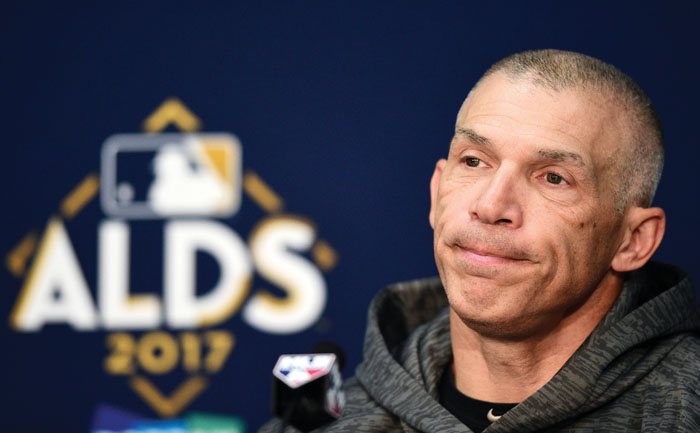 PHILADELPHIA (AP) — The Phillies got their man.

“I’m excited for this next chapter of my career,” Girardi said in a statement.  “The Phillies have a strong commitment to winning from the owners to the front office to the players to the fans.  It’s something that I’ve seen up close for the last 30 years of my baseball career. I played against the great Phillies players of the early ‘90s from Dutch Daulton to John Kruk to Dave Hollins, and I managed against their teams during the incredible run they had from 2008 to 2011. To have my name now associated with this great franchise is something that I couldn’t be happier about.”

Kapler was fired after an injury-depleted team went 81-81 despite significant offseason additions highlighted by Bryce Harper’s arrival. He was 161-163 in his two seasons. The Phillies also interviewed Dusty Baker and Buck Showalter. Girardi was the favorite among vocal fans, who didn’t accept Kapler mainly because of his California-cool personality.

Girardi was one of the most prominent candidates to fill vacant managerial spots across baseball. He also interviewed with the Cubs and New York Mets.

“Joe brings high character and a tremendous work ethic to his position, and he is a proven winner,” Phillies general manager Matt Klentak said. “I look forward to working with him and I believe that he is the right manager to lead our team to the next level.”

Girardi succeeded Joe Torre after the 2007 season and spent a decade in pinstripes. He led New York to its 27th World Series title, beating the Phillies in six games in 2009. He also managed the Marlins one season and was NL Manager of the Year after going 78-84 in 2006, the only manager in the history of the award to win it with a losing record.

Girardi’s record with the Yankees was 910-710, the sixth most wins in team history. Girardi won at least 84 games each season in New York and had four years with 95 or more, including 103 in 2009. He led the Yankees to three AL East titles and six postseason appearances.

“Matt did a great job running the search, culminating with the three exceptional candidates we interviewed,” Middleton said. “Ultimately, we all agree that Joe is the right person to lead our team, and I am excited to welcome him to the Phillies.”

Girardi is the 55th manager in franchise history. He’ll wear No. 25.

CHICAGO (AP) — The Chicago Cubs thought they needed a new voice in the dugout. They are banking on good ol’ “Grandpa Rossy” to give them a spark.

The Cubs hired David Ross to replace Joe Maddon as their manager Thursday, hoping the former catcher can help them get back to the playoffs after missing out for the first since 2014. The three-year deal includes a club option for the 2023 season. Ross, who’s never managed or even coached before, becomes the 55th manager in club history.

The 42-year-old Ross played the final two of his 15 major league seasons with the Cubs and was a revered leader on the 2016 team that won the World Series, ending the infamous championship drought dating to 1908. He spent the past three years in Chicago’s front office and was widely viewed as a potential replacement for Maddon, one of the most successful managers in franchise history with a 471-339-1 record in five seasons.

“I’m honored by this opportunity to be the next manager of the Chicago Cubs,” Ross said in a statement. “My time with this organization has been special since the day I joined, so to continue with the club in this role is a blessing for which I’m so very thankful.”

Chairman Tom Ricketts described Ross as a “proven winner.” And president of baseball operations Theo Epstein called him “as gifted a leader as I’ve ever come across.”

“David has always stood out for his ability to cultivate the ingredients of a winning culture – accountability, hard work, hustle, competitiveness, trust, togetherness, and team identity,” Epstein said.

Ross played a huge role in reshaping the culture of the Cubs’ clubhouse and was affectionately nicknamed “Grandpa Rossy” by Kris Bryant and Anthony Rizzo. At age 39, he became the oldest player to homer in a Game 7 of the World Series when he connected off Andrew Miller in the sixth inning in Cleveland. The Cubs went on to win in the 10th, and Ross got carried off the field and into retirement by Rizzo and Jason Heyward.

“A lot has been made, and rightfully so, of my connection to the 2016 World Series team, and the notion that I’ll now be managing players I once counted on as teammates,” Ross said. “Having those relationships going into this will be a bonus, no doubt about it. But those guys know I’ll be the first to hold them accountable, the first to demand their best daily effort and the first to let them know about it if they give anything but their best.”

Ross was known to dish out, as he put it, some “tough love” to his teammates. And he insisted that won’t change now that he’s managing some of them.

“We’ll have our fair share of fun along the way, but working hard as a team, playing fundamental team baseball and winning a lot of games will be our top priorities,” he said.

Maddon called him the “perfect” pick and said he told Epstein in a text Wednesday night that Ross was a “great choice.”

“David is wonderful,” Maddon said. “Everything you’ve read about him that’s who he is. He’s a great leader. He’s straightforward. He’s blunt but in a good way. And as we’ve talked about, he really understands pitching. So he’s a perfect choice.”

Only four other managers in franchise history have more victories than Maddon. The Cubs reached the NLCS in 2015 and 2017 and made the playoffs his first four years. But they lost in the wild-card round last October and tumbled out of the playoff race altogether this year. Weighed down by a puzzling discrepancy between their 51 wins at Wrigley Field and 33 road victories, the Cubs finished third in the NL Central at 84-78.

The Cubs were in position to make the playoffs for much of the season. They had a half-game lead in the NL Central on Aug. 22. They had control of an NL wild card into September.

But a nine-game slide, including five consecutive one-run losses for the first time since 1915, wiped out their postseason chances and sealed Maddon’s fate. With an expiring contract, he and the club parted ways. Maddon wound up taking the job with the Los Angeles Angels.

And more big changes could be coming to the Cubs.

Though Bryant and Javier Báez are under contractual control for two more years, the front office needs to determine soon what to do with them. Both would figure to command huge contracts if they hit the open market. Trading one could restock a thin farm system. The same goes for catcher Willson Contreras.

Ben Zobrist and Cole Hamels have expiring contracts, possibly freeing up some money for a team that began the season with the second-highest payroll on opening day at $209 million. The same goes for Nicholas Castellanos, who made a big impression on the Cubs after he was acquired in a July 31 trade with the Tigers. He batted .321 with 16 homers and 36 RBIs in 51 games for Chicago.

“Matt did a great job running the search, culminating with the three exceptional candidates we interviewed,” Middleton said. “Ultimately, we all agree that Joe is the right person to lead our team, and I am excited to welcome him to the Phillies.”

Girardi is the 55th manager in franchise history. He’ll wear No. 25.