Livingstone hopes to halt 3-game skid at home against WSSU 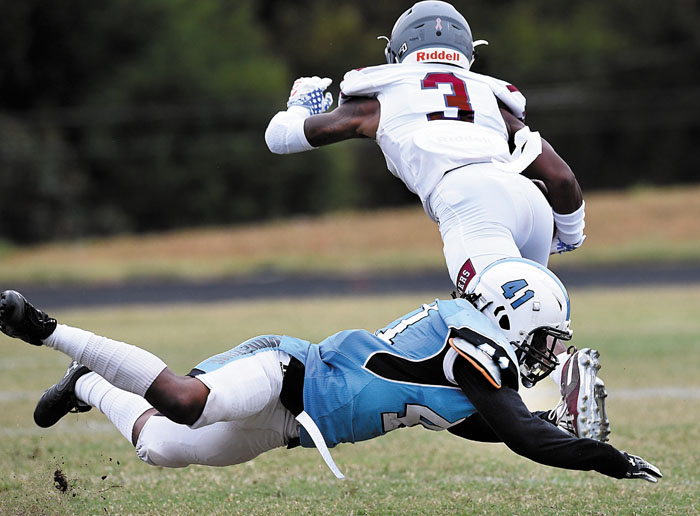 Livingstone's Jordan Oates (41) trips up Jaiden Reavis (3), during an earlier game this season against Virginia Union. The Blue Bears host Winston-Salem State on Saturday. ... File photo by Wayne Hinshaw, for the Salisbury Post

SALISBURY — No one can say that Xavier Longerbeam hasn’t given his all for the Livingstone football program.

A four-year player but not always a starter, the senior quarterback gets knocked down — and sometimes, out of a game — but keeps coming back.

Longerbeam has a non-throwing, left shoulder that has “popped” out so many times, he has learned how to put it back into place himself. It sounds painful, but he deals with it.

Last week, in a 27-20 loss at Shaw, Longerbeam had completed 11 passes for 171 yards, but a questionable late hit in the third quarter forced him to the sideline. This time, the shoulder was stubborn and not easily “fixed,” so sophomore QB Miles Hayes finished the game for the Blue Bears.

Longerbeam said that he rehabs the shoulder every day and he’s “definitely, ready to go again.” Coach Daryl Williams has confirmed that Longerbeam will start on Saturday when Livingstone hosts Winston-Salem State at Alumni Memorial Stadium (1:30 p.m.).

“It was a late hit, in my opinion,” the 6-2, 230-pound Longerbeam said, of the play against Shaw. “They threw me down onto the shoulder and it popped out again. It was more difficult to get back into place and that’s why I wasn’t able to go back in. I’m used to popping it back in … I can usually do it myself. With rehab, it feels fine now — back to normal.

“The (shoulder) separation has been going on for a few years now,” continued Longerbeam. “It’s a repetitive injury, but I can play through it. The shoulder had been fine all season. Early in (last week’s) the game, I was actually delivering blows with my left shoulder. It felt perfect — until that tackle.”

Actually, that injury, and others, have curtailed the senior’s playing time. After starting a lot in 2016 and 2017, Longerbeam saw Hayes, a true freshman last year, take most of the snaps. While Hayes also battled some injuries, Longerbeam was supportive throughout, no matter who was under center.

“I’m glad to get the opportunity to start again, but at the same time, as long as we were winning some games, whatever was best for the team was fine with me,” said Longerbeam.

Against Shaw, the Blue Bears had moved the ball effectively under Longerbeam and that continued, when Hayes came on in relief. However, red-zone issues continued to plague Livingstone, losing its third straight game. The Blue Bears amassed 471 total yards and 26 first downs, yet, could only net 20 points.

“We played 3 1/2 quarters of good football, but it got away from us at the end,” said Williams. “Dropped passes and missed tackles, things you can’t do against a good football team, if you expect to win. It came down to self-inflicted mistakes that we’ve got to get corrected this week. With Winston-Salem State coming in here this week, we cannot continue to drop passes in the end zone and miss clear-cut tackles — that’s been our problem the whole season.

WSSU, perennial title contenders in the CIAA, did not start with one of its strongest teams, but are now showing signs of life. After a 1-4 start, the Rams have won two straight games, beating J.C. Smith (23-7) and St. Augustine’s (31-10). The St. Aug’s game came a week after the Falcons defeated Livingstone, 20-12.

For Longerbeam and fellow senior, offensive guard Deonte Foxx, Saturday’s game will be their last opportunity to beat the Rams.

“It would definitely be big,” said Foxx, about the prospects of defeating Winston-Salem State. “We haven’t been able to do it yet and we have one more chance.”

“Livingstone gave me a second chance,” said Foxx, who is scheduled to graduate in May with a degree in sports management. “I  made my way ‘home’ here. It’s been a fun four years. There’s been hardships on the field, but the players and coaching staff are a tight-knit family. We stick together. That’s what has helped us make an improvement this season.”

Longerbeam is from Panama City, Fla., but since he arrived at Livingstone, his parents have relocated to Alexandria, Va. He hopes to move to that area after he graduates in May, with his degree in history education. Longerbeam says that he wants to teach history in high school and coach football.

Williams believes his team will be ready this Saturday, but downplays the rivalry aspect with WSSU.

“I don’t know that you can call it a rivalry,” said Williams. “It’s a good football game, but it’s a rivalry if you beat them some of the time. “We’ve haven’t won in this series in quite some time — that’s No. 1. No. 2, I think, is that it’s going to be a great atmosphere for college football. And No. 3, the game usually comes down to special teams or which team makes the fewest mistakes. But I would love for it to turn into a rivalry, where we beat them some.”

NOTES: Saturday’s game will be Military and Public Safety Day. Livingstone plans to recognize the Wounded Warrior Project at the game as well. … the Blue Bears will be at home for the remainder of the season, hosting Fayetteville State next week for Homecoming and then, J.C. Smith on Nov. 9, in the always popular Commemorative Classic. Both of those contests will also have 1:30 kickoffs.