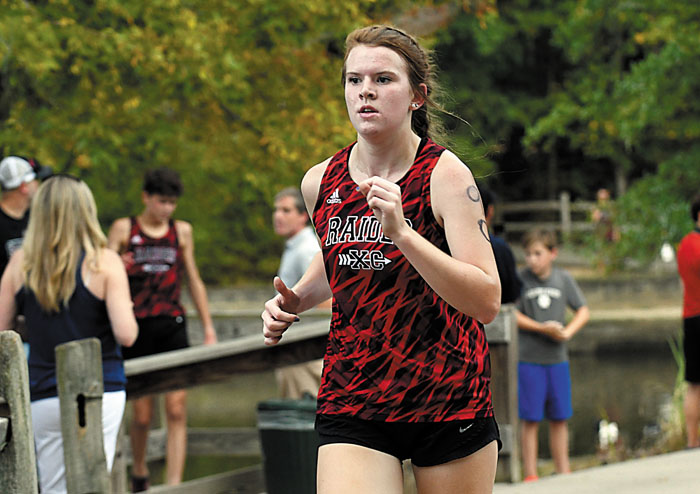 But no one makes cross country look easy. Cross country, even for natural athletes, is sweaty work.

On Thursday, Watkins won the Central Carolina Conference Championship at Salisbury Community Park. Even on a pleasantly cool day, it wasn’t easy for her.

She was straining, hurting, as she reached that last grassy flat that rolls toward the finish line. She heard people screaming her name. She could hear footsteps behind her. She kept moving.

“When I came to that last stretch, I thought I was dying, but I kept my sprint up,” Watkins said. “I was a little surprised I finished first.”

Watkins, who is also the Davidson County champ, is proof that beasts come in all shapes and sizes. This beast is roughly 5 feet tall and maybe 100 pounds of red hair, freckles, fire and tenacity. She ran 21:32 and held off North Davidson’s Vivian Posados by five seconds.

“Summer found what she needed to find,” East Davidson coach Justin Sink said. “So proud of her.”

Watkins not only won the individual title, she paced her team to victory,  the first conference crown for the program in 15 years. Abby Kennedy (5th), Tara Oldaker (7th), Alexa Nameth (11th) and Millie Tysinger (20th) scored for the Golden Eagles. While East Davidson’s five best runners added up to 44, their official winning score was 41. West Davidson had two strong finishers (10th and 19th), but didn’t have enough entries for a team score.

South was the defending champion, but injuries have hurt the Raiders this season. South got strong individual efforts from Bethan Rymer and Madison McGuire. Rymer, the runner-up last season, finished fourth. McGuire was ninth.

“It’s been a hard year, but hopefully our girls will stay with it and keep working,” Julian said. “All our runners gave us everything they had today. We did well and Salisbury ran well. This is a hard, competitive league, and we both had two girls make all-conference.”

Salisbury’s Leah Cressler passed South’s McGuire a few strides from the finish line to get eighth. The seniors have had their duels over the years.

Salisbury sophomore Sutton Webb, a soccer standout who has a lot in common with Watkins, placed third.

“Coach (Sallie) Pittman talked me into trying cross country, and I’ve enjoyed being involved in it,” Sutton said. “But this is such a hard course.  It just feels so long and drawn out compared to a more compact course like Dan Nicholas.”

The CCC uses the same course layout as Catawba College. It’s a different layout than the one the North Piedmont Conference used recently.

“You just don’t think it’s ever going to end,” Watkins said with a laugh. “You get to a turn, and you think this has to be the last one, but, no, here comes another one.”

Still, Watkins and her teammates did what they needed to do and wanted to do. Now they’ve added the CCC team title to the Davidson County team championship they claimed in early October in Denton.

“We came up a little short in the conference last year, so the CCC was a big goal of ours,” Sink said. “We had strong performances all-around. Kennedy ran a great race. Oldaker is always there for us. And we had a freshman (Nameth) that made all-conference. It was a great day to be an Eagle.”