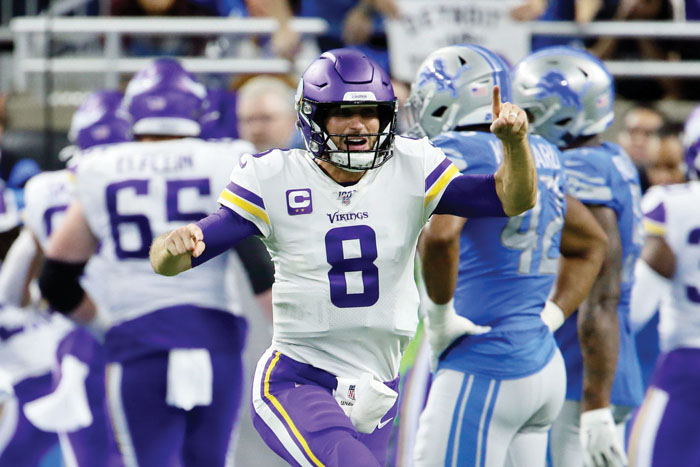 Minnesota Vikings quarterback Kirk Cousins (8) reacts after a touchdown by running back Dalvin Cook during the second half of an NFL football game against the Detroit Lions, Sunday, Oct. 20, 2019, in Detroit. (AP Photo/Duane Burleson)

MINNEAPOLIS (AP) — The coaches and players who have departed the Washington Redskins have not always been complimentary of their time with a franchise that has experienced its share of dysfunction over the past two decades.

Kirk Cousins conceivably could have joined that chorus of critics, a cacophony amplified just last week by Kyle Shanahan. After all, the team’s disinterest in giving him a longer-term, market-rate contract left Cousins as the rare starting quarterback playing on a one-year deal for two seasons in a row before becoming a free agent and signing with the Minnesota Vikings in 2018.

That’s not his style, though, nor is it his story.

“Honestly for me, when I think of my time in Washington, I just think of the word gratitude. I’m so grateful that I was drafted by them,” Cousins said.

The fourth-round selection in 2012 out of Michigan State finally became a full-timer in his fourth year, after second overall pick Robert Griffin III flamed out.

“They picked me when nobody else did. I was sitting around waiting for a phone call for 2½ days,” Cousins said. “I was given an opportunity to start when there weren’t many people outside of that building who thought I should.”

Cousins will face his former team for the first time on Thursday night, when the surging Vikings (5-2) host the reeling Redskins (1-6). As fate would have it, the player Cousins replaced, Case Keenum, now has his old job.

After a one-year stop in Denver, Keenum was traded to Washington. He will visit U.S. Bank Stadium for the first time since the “Minneapolis Miracle” pass he completed to Stefon Diggs for the winning touchdown on the final play of Minnesota’s divisional round game against New Orleans after the 2017 season that was a career best for the longtime backup.

“There’s not enough time to reminisce,” Keenum said. “It’s a special time, a special play, a special group of guys, something I’ll remember forever, but not necessarily this week.”

Like his successor in purple, naturally, the significance of playing against his old team was mostly an afterthought for Keenum. Even if there were actually some lingering bitterness fueling extra motivation, well, neither of them would acknowledge it.

“I’ve played long enough to where I feel like if I keep going like I’m going I might play against my old team every week,” Keenum said. “It’s adding up now, so it’s just a normal game for me.”

SAINTS QB BREES SAYS PLAYING AGAINST CARDINALS IS ‘THE PLAN’

METAIRIE, La. (AP) — Drew Brees pulled a football out of his locker inside the New Orleans Saints’ training headquarters and wrapped his right hand around it, splaying his surgically repaired thumb away from his forefinger.

The demonstration of how far he’s progressed in his rehabilitation since his Week 2 injury left no doubt about his intent to tell coach Sean Payton he’s ready to play this Sunday against the Arizona Cardinals.

Brees affirmed that he does indeed feel like himself and that he threw the ball well at practice Wednesday but added that he wants to see how he performs throughout the week in team drills to ensure his accuracy, timing and overall effectiveness meets his standards.

“I need some competition,” Brees said.

Brees said that, technically, his thumb won’t be fully healed until he’s three months out of surgery, which was performed on his ulnar collateral ligament in Los Angeles on Sept. 18. But Brees noted that a surgically inserted internal brace provides enough support for him to grip the ball firmly now, five weeks later.

“Today it was good to have him out there throwing,” Payton said. “He’s done a great job with his rehab.

With backup QB Teddy Bridgewater filling in, the Saints (6-1) have won all five games Brees has missed since his injury during New Orleans’ Week 2 loss to the Rams in Los Angeles.

They enter their bye week after this Sunday, meaning that if Brees didn’t play against Arizona, he’d have seven weeks of rest before returning in Week 10 against Atlanta. But Payton asserted that he doesn’t hold players out of action longer than necessary because every victory counts the same, no matter the perceived strength of a given week’s opponent.

KANSAS CITY, Mo. (AP) — Chiefs coach Andy Reid was unwilling to rule out quarterback Patrick Mahomes from their upcoming game against Green Bay, even though it’s been less than a week since the reigning league MVP dislocated his kneecap in a victory in Denver.

Regardless of whether he plays Sunday night, that’s good news for the Chiefs.

The initial thought was that Mahomes could miss up to six weeks, but X-rays and an MRI exam returned the best possible result. So while the Chiefs are moving ahead as if Matt Moore will be under center against the Packers, the starting job may not be his as long as expected.

“I mean, he attacks everything. That’s how he goes about it,” Reid said of his young franchise quarterback.

“I think it was important that he hear from the doctors and the trainers that he could proceed and things would be OK as he goes forward, so he’s full-steam ahead.”

While most of the Chiefs were given a couple days off after their victory Thursday night, Mahomes was back at the facility over the weekend getting treatment on his knee. That has continued right into their first practice for the Packers on Wednesday, when Mahomes was expected to do some throwing.

Reid said that Moore, the former quarterback in Carolina and Miami, would take the majority of reps as the starter. But he indicated that Mahomes could get a few of them, and that’s a positive sign that one of the league’s prolific passers could be back in the next couple of weeks.

The Chiefs promoted rookie Kyle Shurmur from the practice squad to serve as a potential backup.

“Everybody is different,” Reid said, “and really the doctors are telling Patrick what he can do along the way, within reason. He’s been doing that and doing it well. That’s probably what I would tell you. We just have to wait and see how it goes, but that’s why we’re doing what we’re doing.”

By that, he means preparing Moore to start a primetime showdown between division leaders who are both targeting a spot in the Super Bowl. The Packers roll in at 6-1 and fresh off a blitzing of the Chiefs’ bitter rival, Oakland. Kansas City is coming in at 5-2 and fresh off a blowout win over the Broncos.

It might not be the showdown between Mahomes and Packers counterpart Aaron Rodgers that everyone was anticipating, but it’s still a marquee matchup between two of the league’s storied teams.

And the Chiefs don’t believe their chances are any worse with Moore leading them out.

“Both of those guys are great quarterbacks, and Matt’s been in the league a long time,” rookie Chiefs wide receiver Mecole Hardman said. “We know what Pat can do. Both can get the job done.”

Notes: DE Frank Clark (neck) and LB Darron Lee (illness) did not practice Wednesday. CB Kendall Fuller (broken thumb) also missed the workout. … LT Eric Fisher (groin surgery) was back at practice for the first time since Week 2. “He’s going to give it a whirl,” Reid said. “See how he does.” … WR Sammy Watkins (hamstring) appears on track to play. He practiced last week before missing his second consecutive game. “He’s moving around well enough to be out there at practice, and we’ll just see how it all goes,” Reid said. “I put him in that group of guys that are practicing but banged up.”