Salisbury tennis blanks West Wilkes, moves on to third round 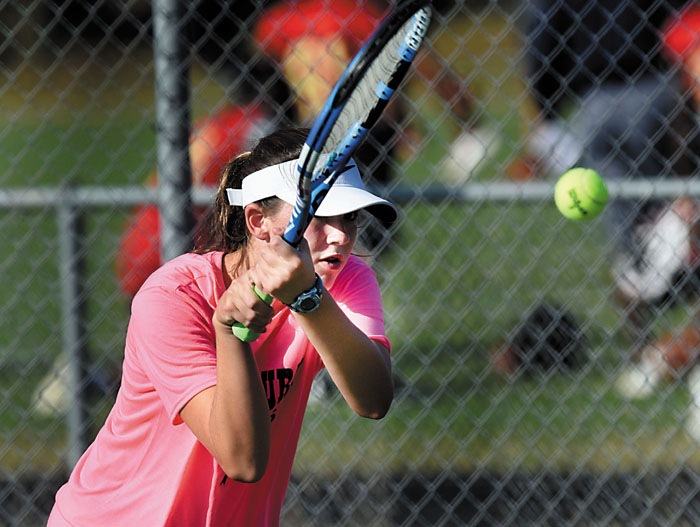 Wayne HInshaw file photo/for the Salisbury Post ... Salisbury’s Meredith Burton, shown in an earlier match, helped lead the Hornets past West Wilkes, 5-0, in the second round of the state 2A girls tennis playoffs, Wednesday afternoon.

The Salisbury girls tennis coach is more near-sighted than far-sighted these days — and it’s all by design.

“We can’t look ahead at all,” he insisted late Wednesday afternoon, moments after the unblemished Hornets breezed to a 5-0, second-round victory over visiting West Wilkes. “We’ve got a deep team, but every round, we’re just taking it one at a time. That’s how you get there.”

He should know. That formula worked for Salisbury two autumns ago, when some strategic planning and timely execution delivered a 2A state championship.

The current Hornets (14-0) will host a familiar foe, Oak Grove (13-2), in Monday’s third round. Salisbury defeated Oak Grove, 6-3, in a Central Carolina Conference match on Sept. 19.

“It’ll be hard, but I think we could make it to the state final,” said first-singles player Lillie Rusher. “This is a strong team. We’re all well-matched, playing where we have the best chance to win. If we all come together and play our best, we might get there.”

Nothing is ever a lock, but Salisbury at least has a hinge secured in its long-range plan. Winners yesterday included Meredith Burton, Margaret Thurman, Abby Campion, Sophie Chimel and Kate Burton. Rusher’s match with state-qualifier Zoey Albert was halted after splitting two sets because the outcome was clinched. No doubles matches were played.

“We’re pretty disappointed they didn’t want to finish the match,” West coach Angie Eddings said after the Blackhawks finished 13-3. “We came a long way and left 100 percent on the court. But looking at our season, we won all the way to second round. Salisbury just has great players who work hard.”

Griffith made the decision to stop the match after Rusher rallied for a 6-4, second-set win against Albert.

“We’ve got three girls going to states this weekend,” he said. “And we’re going on in the dual team tournament. I don’t want any of my girls getting hurt. I could have stopped it sooner, but I at least asked Lillie if she wanted to finish. She said, ‘Let me just play for a split.'”

Junior Meredith Burton was the first back to Salisbury’s camp after she disposed of Elizabeth Minton, 6-0, 6-0 at second singles.

“I played my game really well and tried to stay consistent,” said Burton, now 13-1. “A lot of games went to deuce, which was nerve-wracking. I have a better backhand than forehand — so I’d force her to hit backhands. It made her run around a lot, trying to turn so she could hit forehand shots.”

Next off the court was Thurman, the red-haired sophomore who found an extra gear in her 6-0, 6-4 third-singles win against Cassidy Miller.

“I was very much in control in the first set,” she smiled afterward. “My placement was good and I didn’t make many errors. For some reason, I didn’t move as well in the second (set). I didn’t keep up that intensity. It keeps getting more challenging, but you know, it has to.”

Campion put the Hornets up 3-0 with her 6-0, 6-1 triumph over Lizzie Church at fourth singles.

“I was able to move my feet and hit balls with the middle of my racket,” the sophomore said. “But she did a good job of running me around. She could place the ball really well.”

Teammate Kate Burton, the lone freshman in Griffith’s rotation, remained unbeaten in 14 matches with a 6-0, 6-2 decision over Kendall Stanley at No. 6 singles.

“It’s my first varsity season,” she said. “And I’ve gone against some really good players. You have to make every point count. Even when you’re down, don’t stress. You can always come back.”

SHS secured the outcome at fifth singles, where Chimel rallied in both sets and produced a 6-3, 6-2 win over previously unbeaten Paige Phillips (12-1).

“That tells you we’re a strong team, one-through-six,” she said. “I was kind of nervous today. Down 3-0 in the first set, I think I wasn’t prepared. Then I got my head in it and I was good to go. Won the next six.”

Chimel, a sophomore with a 10-0 record, recovered from a 2-0 deficit to win the second set. “I think I get too comfortable sometimes,” she ceded. “Tennis is a game of momentum. When you get it, you’ve got to keep it. Everybody just needs to play their hardest, worry about their game and nothing else.”

That left Rusher and Albert, who slugged through a too-late-to-matter 4-6, 6-4 draw before Griffith sent everybody home.

“I think we’re in a good place right now,” he said. “Much better than last year. We’ve got more experience under our belts and we know what we’ve got to do.”

NOTES: The shutout was Salisbury’s 11th of the season. The Hornets have won 108 of 116 matches. … West Wilkes had won its nine previous matches. … Rusher will participate in the state individual singles championship scheduled Friday and Saturday at the Cary Tennis Park. Meredith Burton and Thurman qualified as a doubles team.