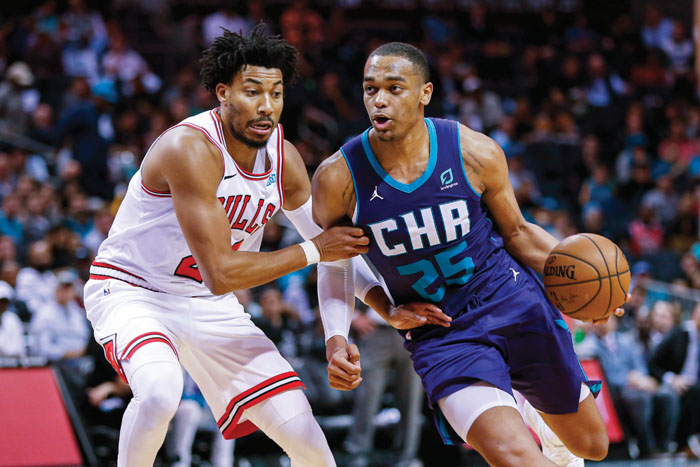 CHARLOTTE (AP) — Rookie PJ Washington erupted for 27 points on seven 3-pointers, and the Charlotte Hornets opened the post-Kemba Walker era with a thrilling come-from-behind 126-125 win over the Chicago Bulls on Wednesday night.

The Hornets made 23 3-pointers, the most in franchise history in a regulation game. Their record is 24, but that came in a double-overtime game.

Devonte Graham was a difference-maker off the bench with 23 points on 6-of-7 3-point shooting to go along with eight assists, while Marvin Williams had 17 points on five 3s.

Together, Washington, Graham and Williams were 18 of 25 from 3-point range, offsetting the Bulls’ 78 points in the paint.

Lauri Markkanen led the Bulls with 35 points and 17 rebounds. Chicago also got a strong game from their top draft pick Coby White, who had 17 points and seven assists in his NBA debut in his home state.

Washington, who wasn’t announced as a starter until 90 minutes before tipoff, hit 5 of 8 from beyond the arc in the first half and set a Hornets franchise record for most points by a rookie in a season opener.

Terry Rozier, Walker’s replacement, struggled in his Charlotte debut with seven points on 2-of-10 shooting and wasn’t even in the game in the final minute, instead replaced by the red-hot Graham.

The Hornets overcame a 10-point deficit with less than 6 minutes to play as Graham hit a pair of 3-pointers to ignite a rally. Graham also had two key free throws to put the Hornets up 3 late in the game.

Instead of going for a 3 to tie the game, Zach Lavine drove for a layup with 4 seconds left. The Hornets ran out the clock from there with the Bulls unable to foul.

Hornets: Coach James Borrego went with Rozier, Dwayne Bacon, Miles Bridges, Zeller and Washington as his starting five, a combination that has just 13 years of combined NBA experience. … The previous record for points by a Hornets rookie in a season opener was Emeka Okafor with 19. … Nic Batum left the game in the second half with a sprained hand.

IRVING HAS 50 POINTS IN BROOKLYN DEBUT, NETS FALL TO WOLVES

NEW YORK (AP) — Kyrie Irving scored 50 points in a record-setting Nets debut, but lost his balance and missed a potential winning shot that allowed the Minnesota Timberwolves to pull out a 127-126 victory over Brooklyn in overtime Wednesday night.

Karl-Anthony Towns had 36 points and 14 rebounds for Minnesota, and Andrew Wiggins added 21 points, including the go-ahead basket with 1:19 remaining.

Irving had the ball in his hands with a chance to cap his dazzling debut with a victory, following a Nets timeout. He ran the clock down and then began his drive, but lost his balance near the foul line. He retained his dribble, got up and shot, but his jumper missed.

Gordon Hayward led the Celtics with 25 points. Jayson Tatum had 21. Kemba Walker scored 12 points on 4-of-18 shooting in his Boston debut, and Al Horford had 16 in his first game with the 76ers.

Furkan Korkmaz and Tobias Harris buried consecutive 3-pointers for Philadelphia — after the Sixers had missed 21 of 24 through three quarters — to stretch the lead to 10.

Goran Dragic scored 19 points for Miami, which played without Jimmy Butler because of personal reasons. Nunn and fellow rookie Tyler Herro started in the backcourt instead.

Bam Adebayo had 14 points and 11 rebounds for Miami, and Winslow added seven rebounds and seven assists.

Ja Morant, the No. 2 pick in this year’s draft, scored 14 points and had four assists for Memphis. Jaren Jackson Jr. had 17 points.

INDIANAPOLIS (AP) — Andre Drummond had 32 points and 23 rebounds, and Luke Kennard made three 3-pointers in the final six minutes in Detroit’s opening victory over Indiana.

Domantas Sabonis had 27 points and 13 rebounds for Indiana. Myles Turner added 25 points, and Malcolm Brogdon had 22 in his Pacers debut.

Evan Fournier scored 16 points for Orlando, and Markelle Fultz had 12 points and six assists in his Magic debut. Kevin Love had 11 points and 18 rebounds for Cleveland in John Beilein’s first game as coach.