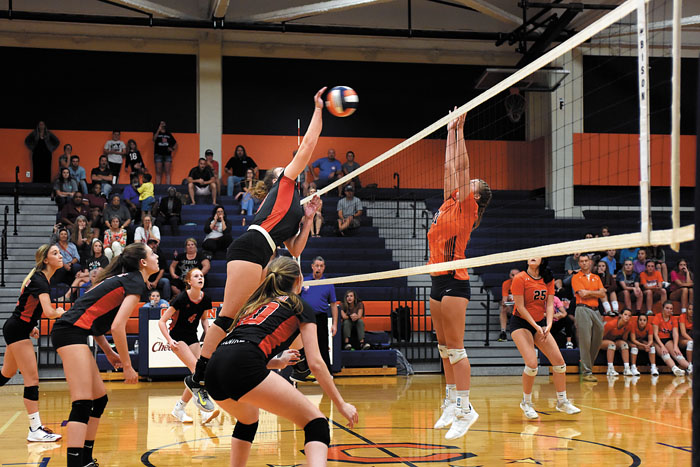 But not this time. Central Davidson 6-foot-1 sophomore middle hitter Madison Tate sent the ball right back at her.

Then Tate blocked Rymer again. And then again.

South appeared to be in trouble for a while, but Rymer adjusted, her coaches adjusted, and her teammates adjusted.

Ashlyn Faw’s serves, Payton Black’s digs and the steady net play of both tall Rymer cousins, Kira and Anna, who do everything well, eventually vanquished the Spartans.

“Central Davidson really looked good in the semifinals, and we knew they weren’t going to lay down for us,” South head coach Jenna Horne said. “They’re talented. But we were prepared and we were ready for the challenge. I thought we picked it up more and more as the night went on. I’m very proud of how we played.”

South had an excellent season in 2018, sharing the CCC regular-season title, but there was disappointment in losing to West Davidson, the eventual 2A state runner-up, in the CCC tournament championship game.

“Losing in the tournament last year hurt,” South senior Ashlyn Faw said. “So winning this year was a big goal. We accomplished it.”

While Tate tormented the Raiders early, experienced outside hitter Sarah McMath, who produced 12 kills with a lethal right arm swing, was consistently troublesome.

“Whenever we can get it to McMath and Tate we’ve got a shot,” Central head coach Monica Parsons said. “We just couldn’t get it to them often enough. We just didn’t handle serve-receive consistently enough.”

The first set was a brawl, with fans from both schools raucous, and with South knocked back on its heels by all those unexpected blocks.

“Watching South in the semifinals we could see they get a lot of kills from Kira Rymer in the middle,” Parsons said. “The plan was to try to take some of that away, and our sophomore (Tate) really came out strong.”

But 8-8 was the last deadlock. After a Kira Rymer kill, two Central violations and and two Anna Rymer blocks, the Raiders were up, 13-8, and headed for victory.

McMath had a half-dozen kills in the first set alone, as the Spartans out-hit and out-killed the Raiders. But South still won the set. Seven closely called violations for double hits, carries and lifts did in the Spartans. South’s 23rd and 25th points came on whistles. South won the set despite getting only two kills from Kira Rymer.

“They had more unforced errors than we did, and that was big,” Horne said. “Cutting down on those unforced errors, those missed serves, is something we work on every day.”

Central offered another scrap in the second set. South led 18-13 when Faw made three straight mistakes in a rough stretch to help the Spartans get within 18-16. South called timeout. That was probably the moment of truth in the match. Horne stuck with Faw.

Out of that timeout, Anna Rymer set for Kira Rymer three straight times. Central dug the first two, but Kira finally put a critical point down on the hardwood for 19-16. That point sent Faw to the service line, and that’s what she does as well as anyone. Six blistering serves later, South owned the set, 25-16.

“That girl is such a good server that she can put it anywhere she wants it,” Parson said. “She can drop it in or she can hit it deep, and there’s not much you can do except put your hands up.”

None of Faw’s serves were aces, technically speaking, but all of them created weak passes and over-passes. The Rymers and Cameron Black had simple plays at the net for quick points, and they didn’t mess up.

“When I went back to serve, Coach said, ‘Just do your thing,”” Faw reported. “I kept them all in and kept them in good spots.”

Kira Rymer had a powerful second set. She had seven kills and four blocks in the set and reclaimed the net from Tate, who had two kills and no blocks.

“I kind of got sick of getting blocked,” Kira Rymer said. “I wish I’d done better, but we made some good adjustments. I started hitting the ball deeper instead of just trying to hit it straight down. And Anna (Rymer) was doing a great job with her sets. She was setting a little to the left or the right, and I was getting around that middle.”

Central tried desperately to bounce back from that furious South run to close the second set.

The third set was 7-all, but Payton Black just kept getting digs, and then the Raiders broke loose. With Kira Rymer serving, the Raiders  reeled off nine straight points for 16-7. A terrific dig by Faw, which led to a Cameron Black kill, was a backbreaker, and South coasted home from there.

“We had a lot more blocks than usual tonight,” Anna Rymer said. “And we served very aggressively. When you serve as well as we were serving, you get easy blocks and easy kills.”

Besides McMath’s kills, the Spartans got six kills from Tate and four from Kendall Norman. Larkin Rabon led the Central defense.

“I thought we did a good job of reading balls and getting after every ball,” South libero Payton Black said. “They came out strong. They always do. But once we finally got the momentum, we took it from there.”

Playoff seeds will be announced today.

Horne said South will host a home game in the 2A playoffs on Saturday at 4 p.m.

Central has qualified for the playoffs and has the tools to have success.

South has lost only six sets all season. Three were in the loss to West Rowan. One was to Carson. The other two were to CCC opponents Central Davidson and East Davidson.

“South Rowan has a very good team,” Parsons said. “But knowing we have taken a set from them when not many people have, that gives us confidence for the playoffs.”